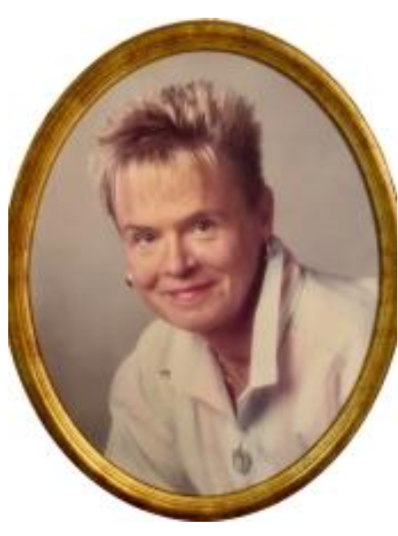 Christa Martha Harkins (December 22, 1936 to December 9, 2019). Christa Harkins, 82, of Sun City Center, FL, passed away on Monday, December 9, 2019. A native of Fulda, Germany, she had resided here since coming from Germany in 1994. She was a member of Prince of Peace Catholic Church, Sun City Center; Caloosa Country Club; Ladies Ancient Order of Hibernians; and Fuldaer Karneval- Gesellschaft (FKG). She was the 1st female to be inducted as an Honorary Member of the 11th Armored Cavalry Regiment; this honor was bestowed by Colonel John Sherman Crow in 1981. She is survived by her husband, James J. Harkins, IV;  sons James J. Harkins, V and Rene Erich Harkins; step-daughter, Gail Moore; sister, Erika Reith; 7 grandchildren and 1 great-grandson. A Funeral Mass will be celebrated 11:00 A.M. Monday, December 16, 2019, at Prince of Peace Catholic Church, Sun City Center, with the family receiving friends one hour prior to services. In lieu of flowers, please make donations to LifePath Hospice, Alzheimer’s Association, or Cure Alzheimer’s Fund. 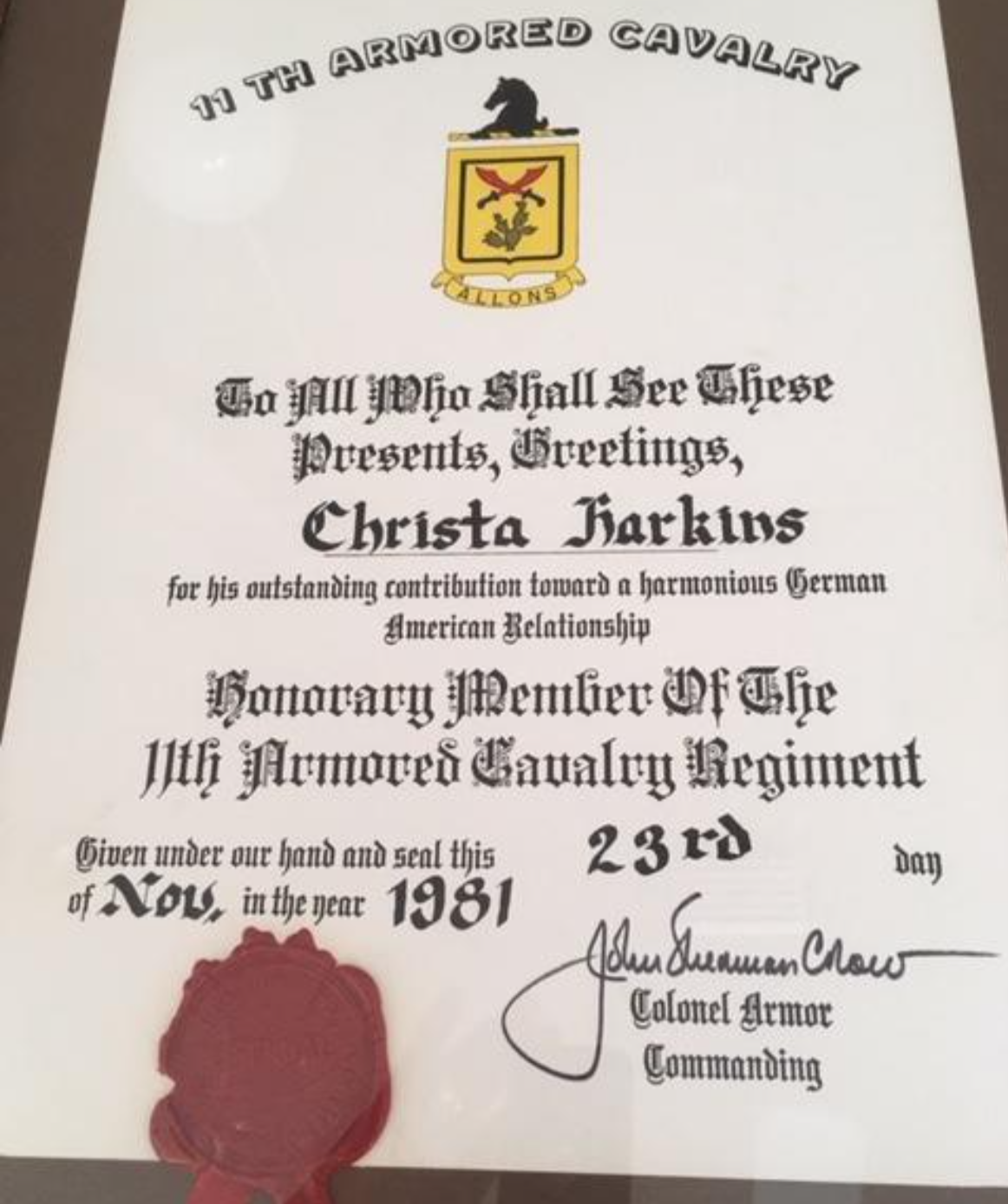 Donald James Crouch (March 10, 1969 to December 20, 2019). Don was laid to rest at Texas State Veterans Cemetery At Abilene on December 27, 2019. He was married on February 14, 1992 to Astrid Nieding, the love of his life. His daughter Brittany Crouch, who is a current recipient of a Blackhorse Association scholarship, is a student at Angelo State University, San Angelo, Texas. His son, Brian Crouch, is a freshman student at Trent Independent School District, Trent, Texas.

He was also a graduate of the Non-Commissioned Officers Academy, and he attained the rank of Sergeant E-5. Prior to his passing he worked as a Customer Service Technician at Windstream Communication. 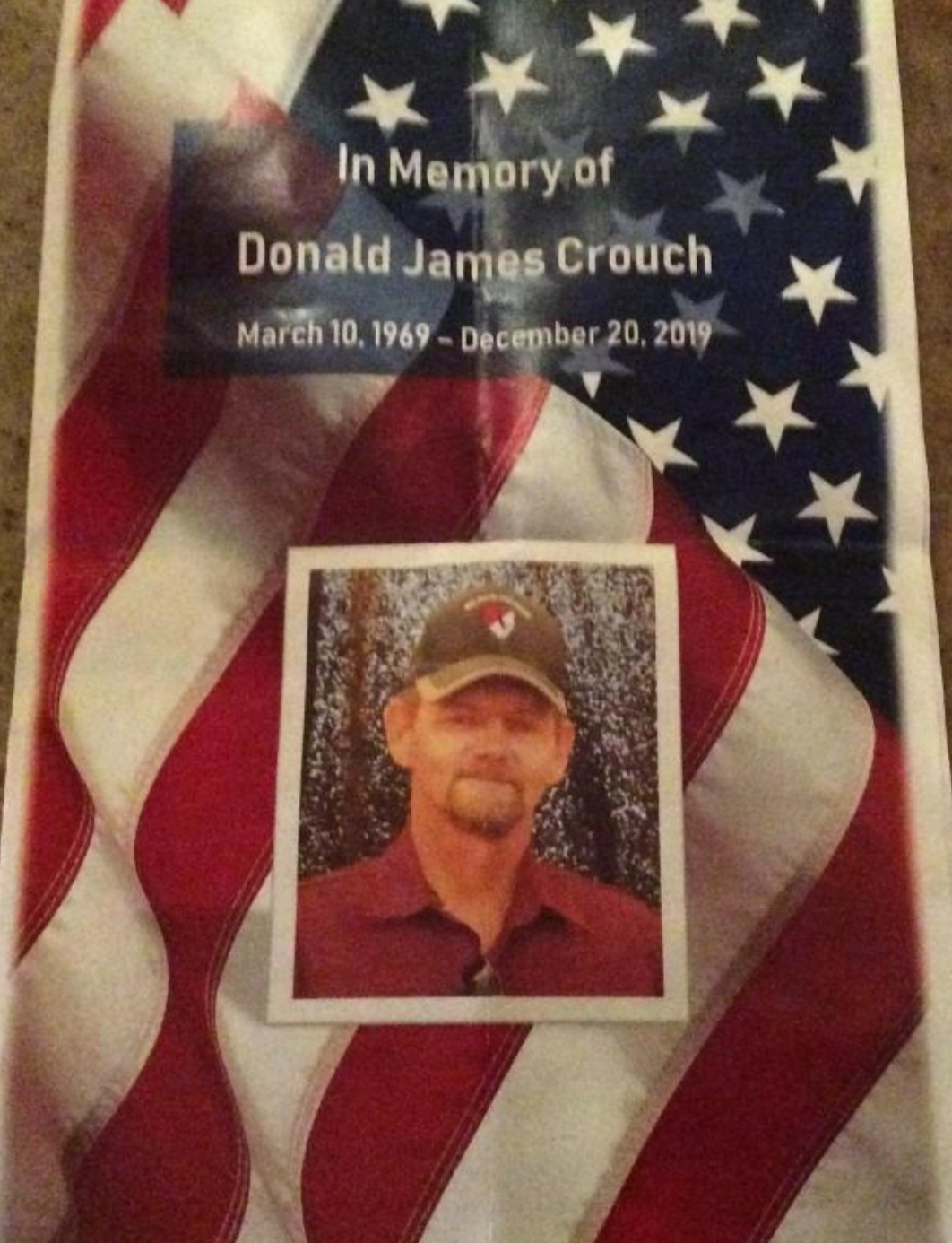 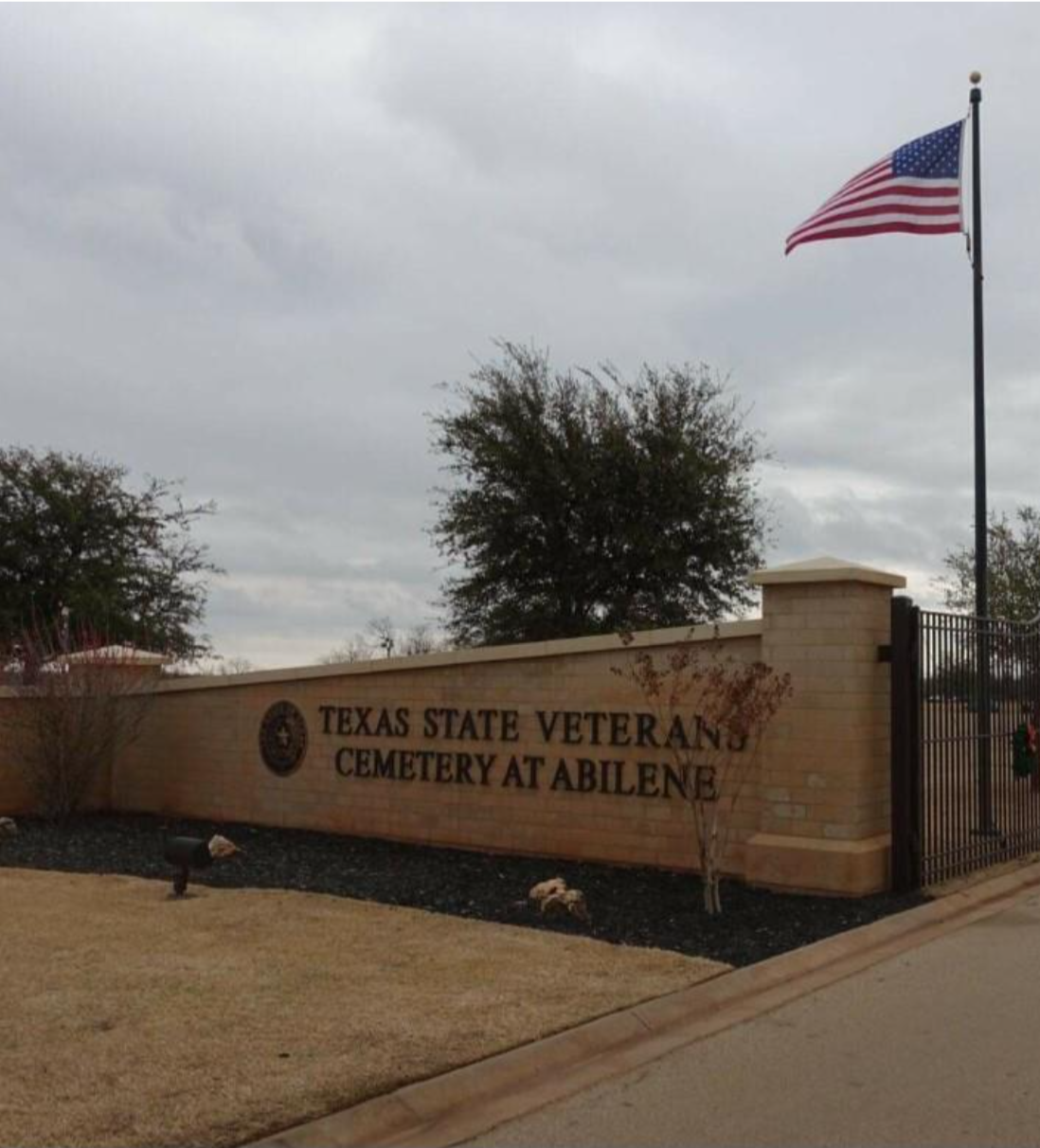 On February 2, 2019 at 11:15 a.m., the Troopers from the Regiment at Fort Irwin and the Blackhorse Association stood proud at the Tomb of the Unknown Soldier as a wreath was laid in honor of the Regiment, the troopers lost, and our 118th birthday.Troopers were assisted by SGT Lana Morton, an NCO temporarily assigned to the Tomb competing for a permanent position as a Tomb Guard. On this day, SGT Morton had also passed all tests and was “up top” laying her first wreath at the Tomb of the Unknown. SGT Morton’s first wreath was the 11th ACR’s wreath designed, cut, and painted by Maintenance Troop, RSS, 11th ACR in 2015 and transported to Washington, D.C.

At the end of the day after Arlington National Cemetery had closed, the wreath was removed and given to SGT Morton to keep; this is a Tomb Guard time-honored tradition. SGT Morton is an immigrant from Ukraine who came to the United States in 2012 to attend college. In that time, her patriotism for her new country led her to enlisting in the U.S. Army, and she was assigned to Fort Myer, Virginia, which is the original home of the 11th Cavalry Regiment.

If you are interested in attending the annual laying of the wreath in honor of the Regiment, the wreath laying ceremony will be held on February 2, 2020 on the 119th birthday of the Regiment at the Tomb of the Unknown Soldier at Arlington National Cemetery immediately following the 11:00 a.m. changing of the guard. Afterwards, gathered Troopers, present and past, usually meet together at Champs at the Pentagon City Mall. If you have questions, please email Guillermo Guillén (Blackhorse 2001 to 2006) at guillermo.guillen.03@nullgmail.comcreate new email.

From the inaugural issue of The Blackhorse newspaper printed in Germany (Volume 1, Number 1), July 1975:

The first Non-Commissioned Officers pass-in-review in the history of the 11th Armored Cavalry Regiment was held on May 22 in Downs Barracks.

Passing in review before CSM James W. Alford was the 1st Sqdn, along with a contingent from the Zollgrenzdienst, the German Customs Police; marching music was provided by the 3rd Infantry Div. Band.

Throughout the entire ceremony, all positions normally occupied by commissioned officers were filled by senior NCO’s of the 1st Sqdn.

The Zoll’s put on a demonstration of police dog handling techniques following the parade.

SAN ANTONIO, Tex., Nov. 11 – The Eleventh U.S. Cavalry, having won all the athletic honors of the maneuver division, including polo, baseball and football championships, and having made the Secretary of War dizzy with an exhibition drill that bewildered even the Chief of Staff [of the Army], isn’t satisfied.

There are some chess players among its officers and they have issued a challenge to play any officer, team of officers or combination of teams that the military establishment at Fort Sam Houston can produce. 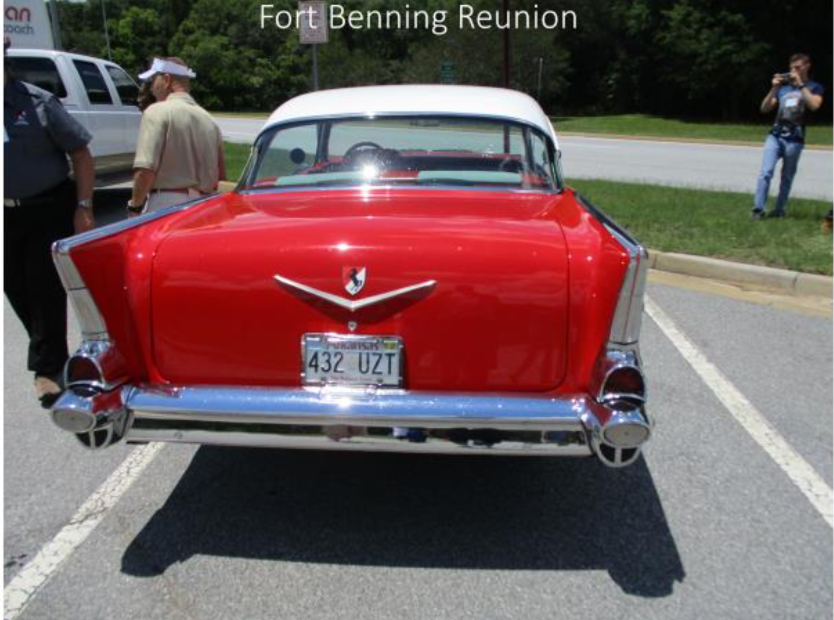 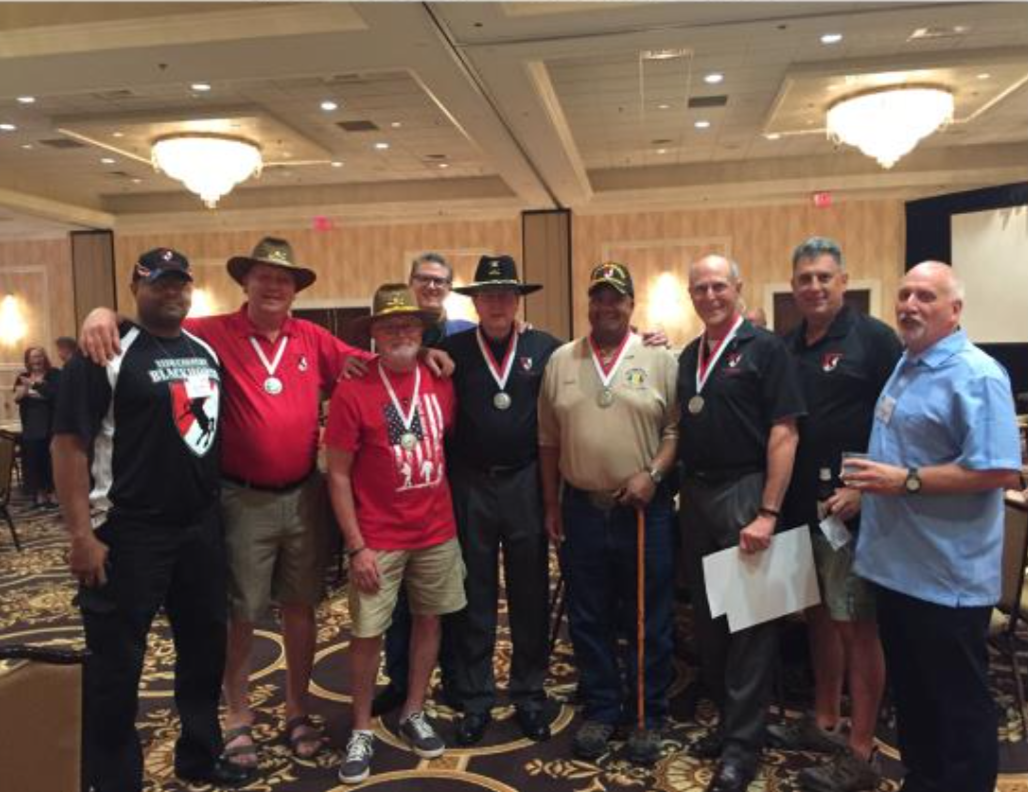 This photo was taken recently at the Marietta Hilton, after an awards ceremony that awarded the Silver Order of St. George to Dale Lawless, Bill Clark, Bob Hurt, Rondo Jackson and Dewey Bolton.

There is a plan for a small group to get together in Fulda April 23-25, 2020 as an informal remembrance of the 30th Anniversary of the last border patrol. Tentative plans include a ceremony at OP Alpha (now Point Alpha) on April 24, with remarks by the 49th Colonel of the Regiment, John Sherman Crow. There is a possibility that either the Germans and/or U.S. Army Europe may take part in the celebration. Renate Stieber has offered to host a reception that evening at the Goldener Karpfen in Fulda. More info will follow as we get more details.

Hope all you Blackhorse troopers have a blessed Christmas and a healthy 2020. Blackhorse 1901 whiskey is available again in limited quantities. An additional 600 bottles were produced last month. Most has been shipped to locations in Texas.

Further information about 1901 Blackhorse Whiskey can be found at this link on the Boundary Oak Distillery website. 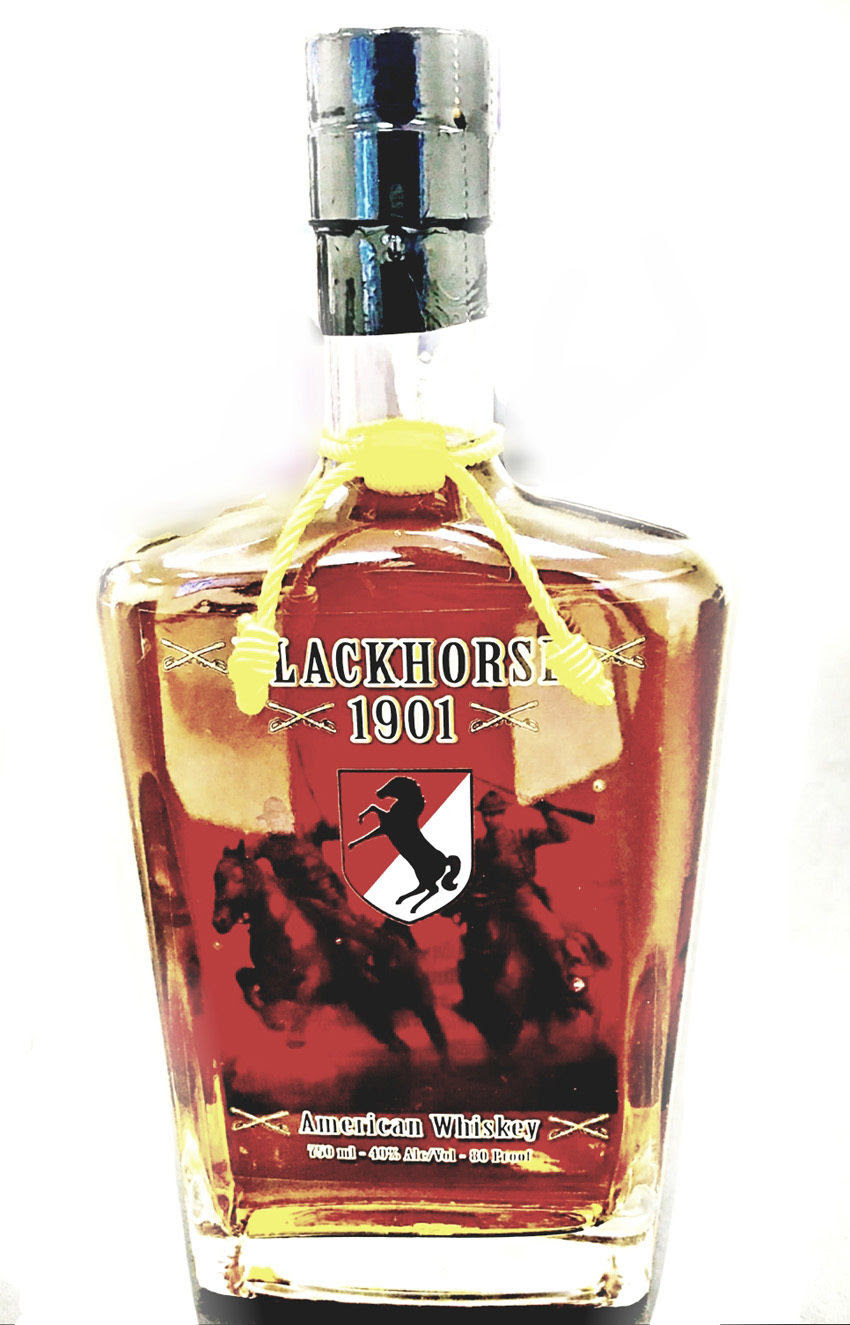 In the November 2019 E-News, we had an update on scholarships. We are reprinting one of the major changes and also providing the applications below. If your children or spouse qualify, take advantage of one of the most important services our Association provides to its membership.

Our vision includes active support to the Troopers in the Regiment. In 2020, we will open up a limited opportunity for Spouses of 11th ACR Active Duty Soldiers to apply for either full-time or part-time scholarships. The scholarships are intended to support them as they continue their education while their Soldier serves in the training of America’s Army at the National Training Center.

A Christmas Wish from Our Friends in Germany 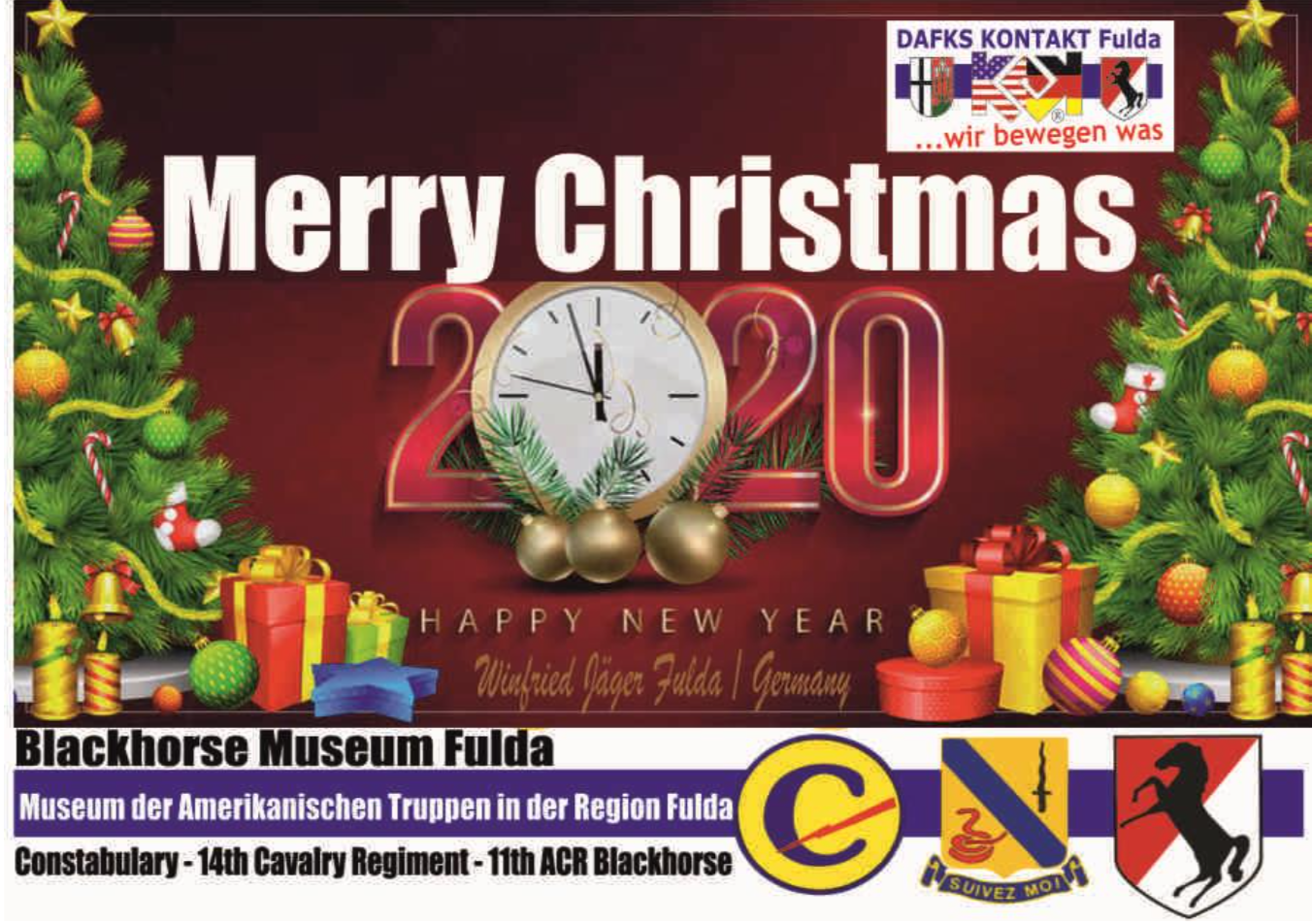