Gregory Alan Ainsworth, 53, of Elizabethtown, Kentucky, passed away Monday, May 12, 2014 at Hardin Memorial Hospital, Elizabethtown, KY. Greg was retired from the United States Army. He was a former senior scout in Anvil Troop in the early 90’s in Fulda and Desert Storm. He was a member of V.F.W. Post #10281, Vine Grove, KY. His survivors include 2 children, Ty Ainsworth of Lincolnton, NC; Ashley Nunn & her husband, David, of White Mills, KY; 4 grandchildren, Kylie, Brooke, Conner, Trenton and 1 granddaughter on the way; his mother, Karlene Ainsworth of Ironton, OH; his father, Bill Ainsworth of Ironton, OH; 1 brother, Adam of Ironton, OH; 1 sister, Michelle of Ironton, OH; a very close friend, Dona Arnold; several nieces, nephews, and a host of friends. Greg’s funeral service was held at 1:00 PM, Monday, May 19, 2014 at the chapel of Coffey & Chism Funeral Home, Vine Grove, KY. Burial followed in the Kentucky Veterans Cemetery Central, Radcliff, Kentucky with military honors
From his former troop commander, Chris Franchek: Having had the honor to serve with him as his Troop Commander, I can offer no finer praise than to say that he was one hell of a Scout, and one damn fine NCO. I sought his counsel often, and I listened intently when he spoke, be it in a field situation or a garrison environment. He was also one of Top Kenny Preston’s trusted advisors…

66th Colonel of the Regiment 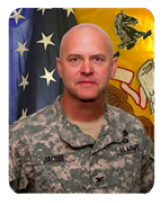 Pictures from Another Era

The pictures below are from Bill Brush (brushw@nullhotmail.com) who served with the Regiment during its first Germany deployment prior to Vietnam. His station was Regensburg, and Bill would be interested in hearing from anyone else who served in the Regiment during this time frame. The note that accompanied the photos follows:
I graduated from high school in 1963, and enlisted immediately with a classmate on the buddy system. We went to Ft. Jackson for basic and AIT. Received orders for the 3d Squadron, 11th ACR thereafter. Spent several days in the bowels of the SS Patch, including Xmas eve and Xmas day. Spent a lot of time playing cards. The holiday treat for the EM was a doughnut or 2.
Disembarked at the Bremerhaven port. Fortunately, one of us moving on to Regensburg was a native German. He made certain we made that train trip without getting lost along the way. I recall that the villages we passed through were dimly lit (by US standards). Didn’t occur to me, as an 18 year-old, that 1963 was only 18 years following the end of WWII.
Our small group was picked up at the Regensburg HBF and moved on to Ft. Skelly. The Personnel Section NCOIC (SSG Rose) was unaware that I had been assigned to the 3d, however. Eventually, I was assigned to Personnel as the squadron’s officer record’s clerk. The HQ Trp commander at the time was Lt. Edward Bell, the 1SG was Big George Crosby, and my boss in Personnel was CWO Hughes. The 3d Commander was either a LTC Saunders or LTC Sanders.
What a great group of guys we had there. Our tankers, and some of the support guys too, were infamous and famous simultaneously. The squadron almost invariably won the periodically assigned ‘horse collar’ for regimental delinquency reports, while also winning the coveted white ‘pile cap’ for excellence on the firing range at Grafenwoehr. Regardless, the locals treated us extremely well while we were off-post, either tanning ourselves on the banks of the Regen or Donau, patronizing the beer gardens, or just walking around that gorgeous old town.
Alas, word came down that the unit was rotating to Ft. Meade, minus those soldiers who had served less than a full year overseas. For me, that meant moving on to 7A HQ in Stuttgart, housed in Patch Barracks at the time. Prior to that, I stayed on in Regensburg as a member of the bare bones rear detachment.
Those 9 months were perhaps the best of my life. Without doubt, however, I’ve never known so much camaraderie. 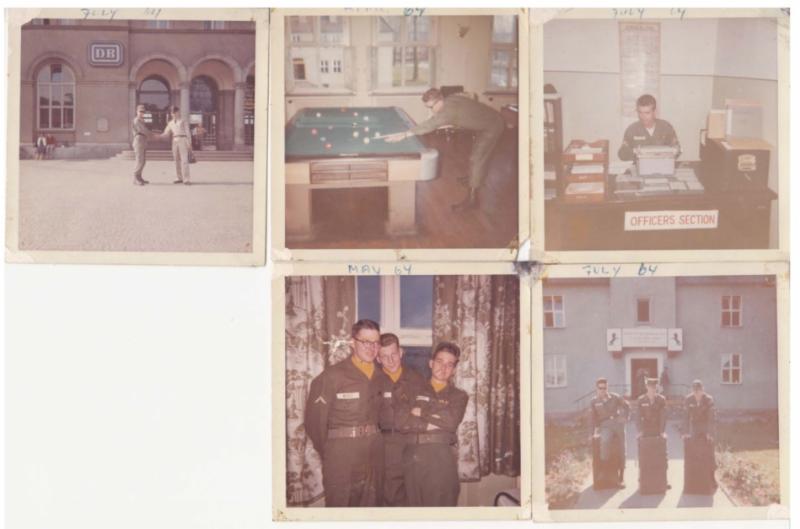 A Blackhorse Fourth
The picture below is from the Fourth of July Parade in Aspen, Colorado. It shows a restored World War II jeep maintained and driven by Command Sergeant Major (retired) Bill Hutton, who served in the Blackhorse from 1974 to 1985 in a variety of assignments. He is shown here driving none other than Former Secretary of the Army and the 52nd Colonel of the Blackhorse, Tom White. 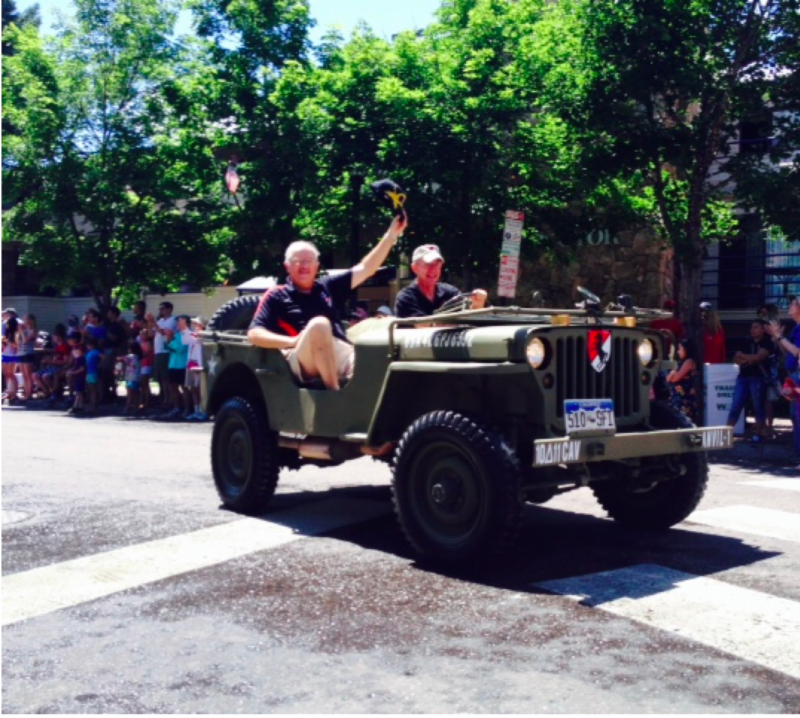 Volker Bausch, Director of Point Alpha recently toured the United States at the invitation of the American Council on Germany (ACG). He gave a series of presentations in April and May 2014 on “Point Alpha-from hot spot in the Cold War to learning site of history.” He made presentations in Denver, Phoenix, San Diego, San Francisco and Madison, Wisconsin. Below are three photos taken during his visit. 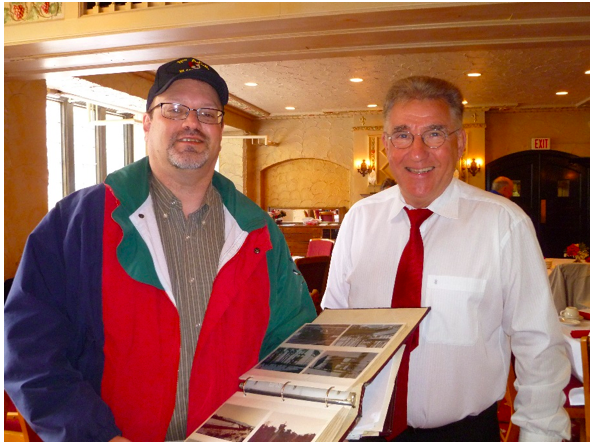 With the Eberhard Röhm, director of the Warburg chapter of the ACG in San Diego 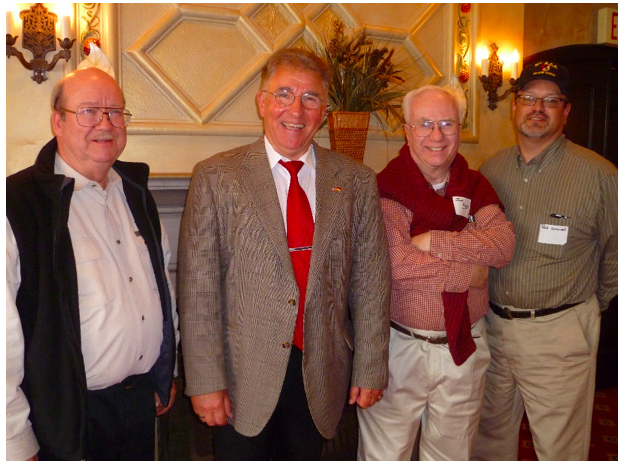 With US Army and 11th ACR veterans who attended the Madison speech. 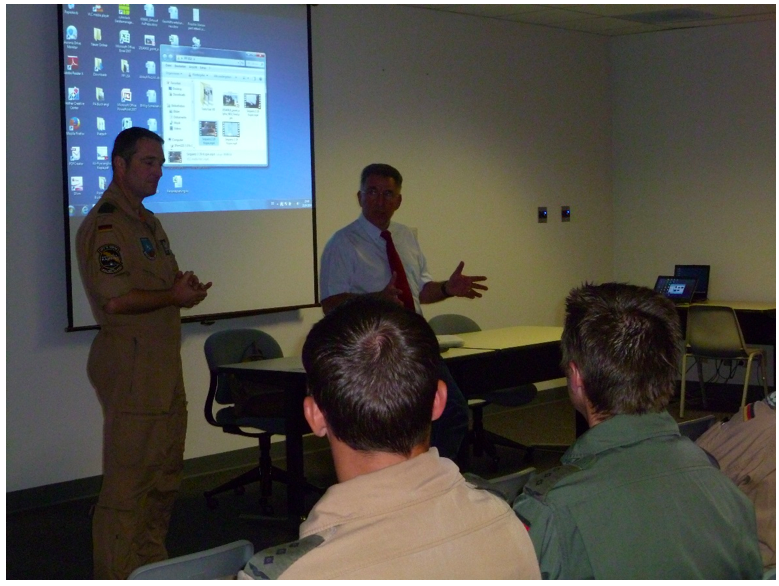 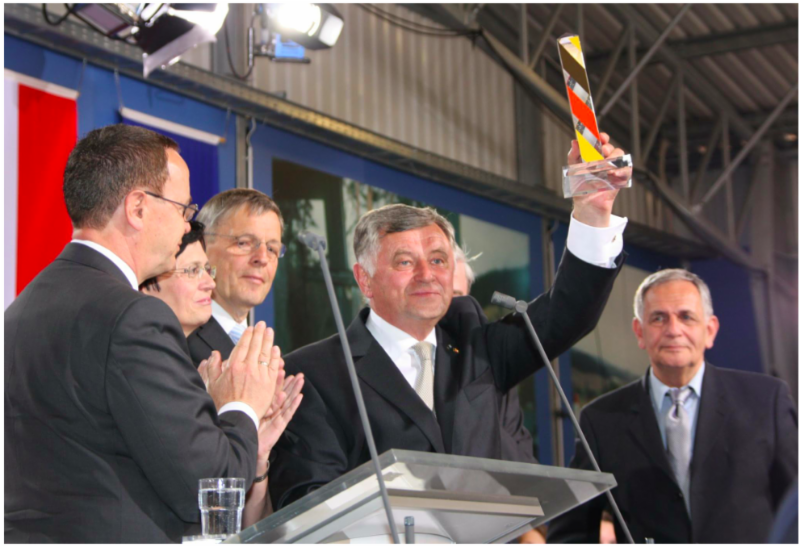 Shown here is this year’s award winner, the former Hungarian Prime Minister Miklós Németh, who ordered in 1989 the opening of the Iron Curtain, which was the border fence between Hungary and Austria; this act facilitated the escape of the first large group of East German citizens to the West. This courageous decision initiated the beginning of the end of the communist regimes in Eastern Europe shortly after.
________________________________________________
A Bit of History – Courtesy of CSM (ret) Ned Devereaux
WHEN THE STARS GATHERED IN HERSFELD

World War II was still ongoing in Germany as U.S. and allied forces continued to push east and west in April 1945. 12th Army Group Commanding General Omar Bradley had just been promoted to four stars, as was George S. Patton. Dwight D. (“Ike”) Eisenhower, Supreme Commander, Allied Powers Europe, [SHAPE] had also been promoted, only to five stars and General of the Army.

In Rick Atkinson’s final book in his trilogy on the European campaign The Guns of Last Light: The War in Western Europe, 1944-1945, he describes when all three of these senior generals met in Hersfeld, Germany.

Bradley had moved his headquarters to Wiesbaden; Eisenhower was in Reims, France. On April 11, 1945, Ike joined his old friend one early morning on the 12th, they “…flew eighty miles northeast, following the autobahn trace to the market town of Hersfeld. Here Patton…awaited them with an armored cavalry escort and a convoy of jeeps, including one adorned with the supreme commander’s five-star rank insignia. East they sped for twenty miles, through a lowland corridor known as the Fulda Gap, arriving at 10:30 A.M. in the Thuringian village of Merkers. A tank battalion guarded the entrance to a nineteenth-century potassium mine, where GIs had made a discovery that Patton believed Eisenhower should see.”

Atkinson goes on to write: “…The XII Corps commander, [Major] General [Manton S.] Eddy, led them onto a rickety freight elevator, and as they slowly descended the pitch-black shaft Patton quipped, ‘If that clothes-line should part, promotions in the United States Army would be considerably stimulated.’ Sixteen-hundred feet down, the doors lifted open…In a wide gallery Patton pointed to currency-engraving plates used by the Reichsbank, and stacked bales of money designated for the Wehrmacht [German solders]. Eyeing the bills, Bradley said, ‘I doubt the German army will be meeting payrolls much longer.”

The mine at Merkers was just one of several mines where the almost-defeated Third Reich stored riches and valuables, some belonging to Germany, some to countries formerly occupied by the Nazi forces. Atkinson goes on to comment: “Eventually valued by SHAPE in excess of half a billion dollars, the treasure in the Merkers shaft lay within what soon would become the Soviet occupation zone.

The rest of the story is probably better explained by the recent movie “Monuments Men.” In 1949, Hersfeld became Bad Hersfeld to recognize the spa springs. Both the 3d Squadron 14th Armored Cavalry (1948-72) and the 3d Squadron 11th Armored Cavalry (1972-93) Regiments were stationed at McPheeters Barracks, located to the east of downtown. There was no recognition of the fact that in April 1945 “stars gathered in Hersfeld.”

Editor’s Note: In 1988, then Major General (ret) George Patton, Honorary Colonel of the Regiment, visited Bad Hersfeld for an OPD with 3/11. While there he told me that his father had his headquarters in Bad Hersfeld and I was to figure out where, and he (MG Patton) would place a marker to commemorate the location. Through good luck we located a photo of LTG Patton standing outside of the 3/11 Headquarters building in McPheeters Barracks. On his next trip to the Regiment as Honorary Colonel, MG Patton placed a plaque commemorating the location of Third Army Headquarters in Bad Hersfeld.

The following was received from someone seeking information about his stepfather’s service. If anyone has any information, his contact details are at the end of the message.

My name is LTC Croft Edwards, and I am an Army Reserve officer. I am trying to do some research on my late stepfather, LTC (ret) Ralph B. Garretson. I have a guidon which I believe was his from Golf Troop, 11th ACR, and my stepsister has one from HHT, 11th ACR. I have tried to get a copy of his official records from HRC but I get the standard story about how they were destroyed in the fire in 70’s. I believe he commanded (or was a 1LT) in the 11th ACR in the early sixties but cannot verify that. I would like to frame the guidon(s) and would like to have as much of the story behind them as possible. Thanks in advance for any information or direction you could provide. 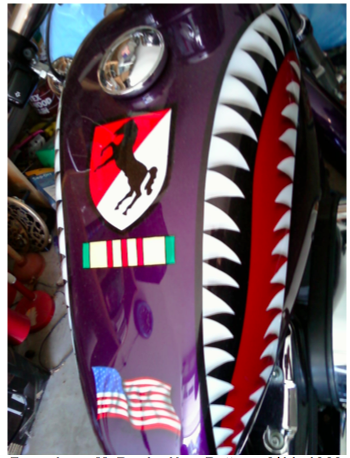 The “Last Patrol” commemoration is still planned to be held at Point Alpha in Germany on April 24, 2015. This is one of many celebrations going on in 2015 celebrating the 25th year of German reunification. The concept of operations for our Last Patrol celebration is a simple one-day affair with scheduled events at the OP, followed by a pay-as-you-go dinner and bar at a place TBD. Squadrons are encouraged to set up their own mini-get-togethers in the days preceding the event. We will be publishing and e-mailing self-initiated tour options to those interested in joining us that week. Over 20 former troopers have already signed up, and we are working now to come up with options for local-area hotels that are reasonably priced. Anyone with contacts on the ground in Germany or who has suggestions for lodging, please let us know. POCs for signing up or sharing information are Dave Cowan (dave.cowan@nullacrpros.com) or Tom Smart (tom.smart@nullacrpros.com)

Everyone is welcome to join us for a casual picnic in the park. Bring something to BBQ, something to share (salad, dessert, or munchies) and your beverage of choice.

Directions:
I-80 to Davis. Take the Mace Blvd exit. Go North and around bend (Mace becomes Covell Blvd). Turn Left on Monarch Ln. Take 1st right onto Temple. Park is one block ahead on left.

I-5 to Woodland, exit at Road 102 to Davis. Proceed South to Davis, approx. 8 miles. Turn left at the 1st major intersection – Covell Blvd. Go about 1 mile to Monarch Blvd, turn right, go 1 block. Turn right onto Temple. Park is 1 block ahead on left.

If you have an item of interest to the membership that you would like to see in future eBlasts or our bi-annual newsletter, please send items directly to banditsix@nullaol.com. The more detail you provide the better. In particular, if you have knowledge of the passing of a former member of the Regiment and want this information published, please provide details of Regimental service and/or an obituary. This is your newsletter, so please contribute.

You can always find the latest news and information on The Blackhorse Association at: https://www.blackhorse.org