Skip to content
Jimmie Quinn
Jimmie B. Quinn, (Colonel, United States Army, Ret.) died on Tuesday, October 22, 2013. In 1965, he graduated from Henderson State University with a BS-BA degree and was commissioned in the United States Army as an Armor Second Lieutenant. He served two tours in Vietnam (to include command of M Company, 3rd Squadron, 11th ACR in 1968-69) and six years in Germany while commanding at every level to include Brigade. He earned a Master’s degree in business administration from the University of Arkansas, and served as a Tactical Officer and Instructor at the United States Military Academy at West Point. Jimmie also served as the aide-de-camp to the Commanding General as a Captain. He was a graduate of the United States Air Force Command and the General Staff College, Armed Forces Comptroller Course, and the United States Army War College. He retired from Fort Knox as a full Colonel, where he served as the Comptroller, Brigade Commander, and Chief of Staff after a total of 26 years of service. After retirement, Jimmie and "Cookie" moved to Murray, KY, where he became Director of the Occupational Safety and Health training Center at Murray State University. He also "worked" as a part-time fishing guide on Kentucky and Barkley Lakes. In 1995, Jimmie and Cookie returned to Pine Bluff to be near their families. He served as Director of the Workforce Development Center and Adult Education and as Dean of Finance and Administration for SEARK College for a number of years.
Michael G. Healey
Lieutenant Colonel (Ret.) Michael Gorton Healey passed away in the loving arms of his family at Sitter and Barfoot Veteran’s Care Center in Richmond, VA on Thursday, August 29th. Michael was born March 27, 1945, in Flint, Michigan. He attended the New Mexico Military Institute and was a graduate of the University of South Carolina, where he served as Vice President of the Sigma Phi Epsilon Fraternity and was awarded a Bachelor of Arts Degree. He subsequently earned a Master of Science Degree in Management from The Florida Institute of Technology. Michael was a career Army officer and decorated combat veteran. He served with distinction and valor with the 11th Armored Cavalry Regiment in the Republic of Viet Nam, where he received a Purple Heart, three Bronze Stars, and a Bronze Star with Valor. In 2009, his unit (Alpha Troop) was awarded the Presidential Unit Citation by President Barack Obama in delayed recognition of their conspicuous honor and valor. Further postings took him to Starkville, Mississippi; Orlando, Florida; West Germany (two tours); and a final assignment at Ft. Monroe Virginia, where he retired at the rank of Lieutenant Colonel after 23 years of service. He was a talented, multisport athlete who went to college on a swimming scholarship, loved basketball and skiing, and continued to run races into his fifties. He loved boating and traveling, and had a special compassion for animals. Most of all, he loved his family, and was loved just as much in return. His warmth and humor will be missed by family and friends alike. Surviving him are his loving and devoted wife of 31 years, Patricia Healey. In lieu of flowers, memorial donations may be made to the Sitter and Barfoot Veteran’s Care Center in Richmond, VA, whose staff cared for Michael with dedication and compassion during the past 5 years, or to the Wounded Warrior Project (woundedwarriorproject.org).
___________________________________________________ 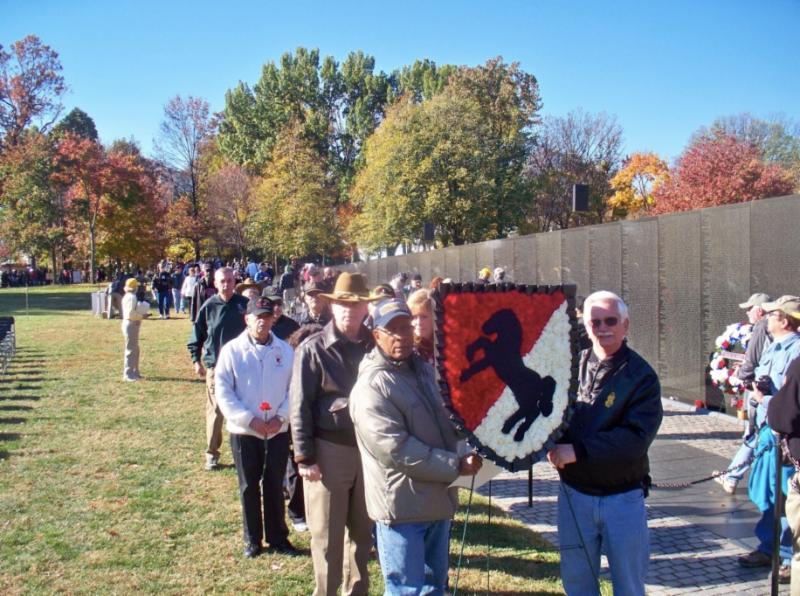 The annual Veterans Day gathering and wreath laying at The Wall 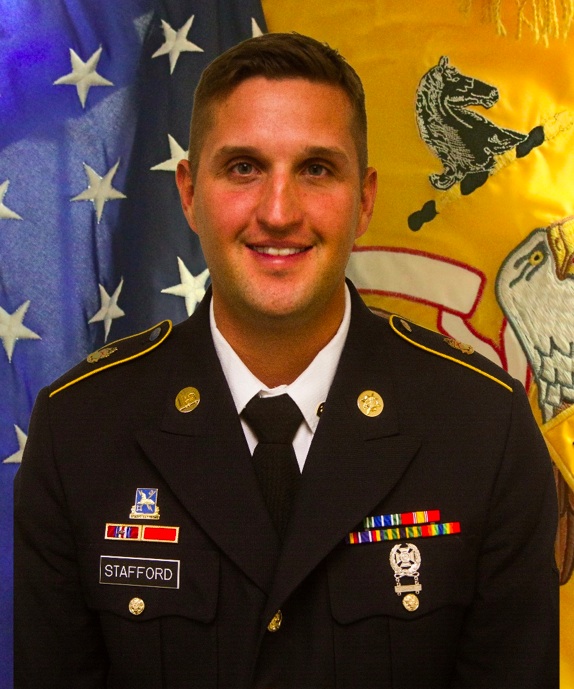 Soldier of the Quarter, Specialist Adam J. Stafford
Specialist Stafford is a 35M Human Intelligence (HUMINT) Collector. He attended the University of Texas at Arlington where he earned a Bachelor’s degree in Police Science and Sociology and was honored as a two-time All-American in Track and Field. He completed Basic Combat Training at Fort Leonard Wood, MO, and Advanced Individual Training at Fort Huachuca, AZ, graduating in the top five Soldiers in his class. Fort Irwin is his first duty station and he is assigned to the Vanguard Military Intelligence Company, Regimental Support Squadron. He is the Team Leader for the HUMINT Collection Team. During training rotations, SPC Stafford operates undercover to gain actionable intelligence in support of the Regimental Commander’s Priority Intelligence Requirements. He is also responsible for conducting classes on Tactical Questioning for Vanguard MICO and TICO Soldiers.
SPC Stafford has earned the Army Achievement Medal, two Certificates of Achievement, and the Order of Hamby, Third Class for his excellence in Human Intelligence Collection. He graduated the Warrior Leader’s Course on the Commandant’s List in July 2013. SPC Stafford’s short-term goals include promotion to Sergeant, starting his Master’s Degree, and representing the Regimental Support Squadron and 11th ACR at the Fort Irwin/National Training Center Soldier of the Year competition. SPC Stafford’s long-term goals are to make the Army a career, earn the rank of Command Sergeant Major, finish his Master’s Degree, and complete a PhD. He is married to Taryn Stafford and has a step-son, Tayler Knutsen.
. . . 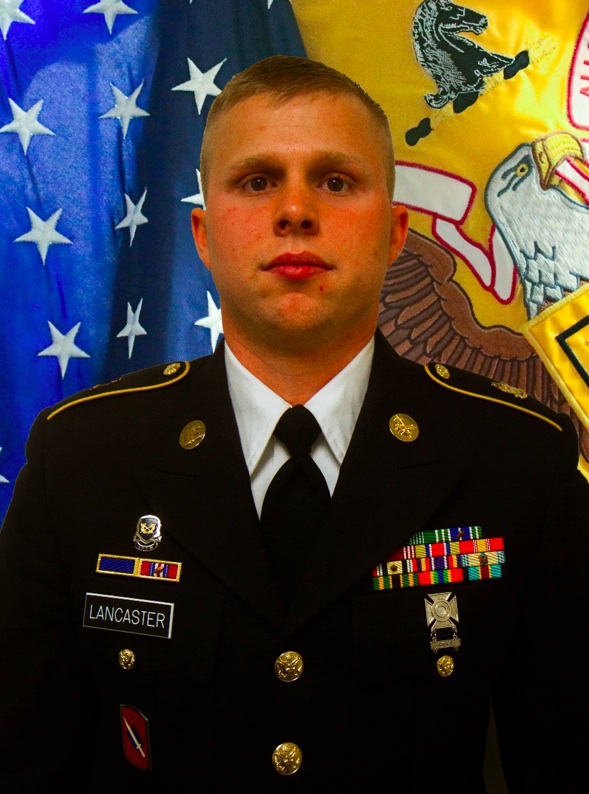 SGT Anthony Lancaster spent three years and ten months in the Arkansas Army National Guard. He transitioned into the Active Component of the Army on December 1, 2009. Prior to enlisting in the active component, he attended Basic Combat Training and Advanced Individual Training at Fort Jackson, South Carolina. In Basic Combat Training, he received a Certificate of Achievement for obtaining a maximum score of three hundred on his Army Physical Fitness Test and was the Combatives Champion in Advanced Individual Training for his class. His first active duty station was Fort Riley, Kansas. The first position that he held was as a Paralegal Specialist in the 1st Infantry Division Criminal Law section and later was a battalion paralegal for the 84th Ordnance Battalion (EOD). He was selected to be a member of his battalion commander’s personnel security detail (PSD) due to his familiarization with convoy security from his time in the National Guard.

His civilian education includes thirty-three credit hours acquired through Park University in the pursuit of an Associate’s Degree in Criminal Justice. He has been awarded the Army Achievement Medal (2 OLC), Army Commendation Medal, Army Good Conduct Medal, Army Reserve Commendation Achievement Medal, National Defense Service Medal, Iraq Campaign Medal, Global War On Terrorism Service Medal, Armed Forces Reserve Medal with the "M" device, Non Commissioned Officer Professional Development Ribbon, and the Army Service Ribbon. SGT Lancaster intends to further his education by pursuing his Associates degree in Criminal Justice. He wants to become the Fort Irwin NCO of the Year. He also intends to actively work to better himself and his career through military education and promotion to Sergeant Major. SGT Lancaster has also set goals to win this board and all those that may follow. He wants to be the Army Noncommissioned Officer of the Year and will be relentless in his pursuit. He is married to Liane Marie, and they have three sons: Jacob, Brayden, and Alexander.

____________________________________________
Further Information on a Previous Correction
The following is from Lou Sturbois who commanded 2d Sqdn,11th ACR from 1981-1983:
The original article in the eblast was correct. John Bailey did join the Regiment in Kaiserslautern. Here’s how that happened. John was serving in 1st Sqdn, 3d ACR in Baumholder in 1964. When the 11th ACR was redeployed that year from Germany to Fort Meade, the regiments swapped squadrons, transferring all the officers, NCOs, and troopers in the 3d who were near DEROS first to the 2d Sqdn, 3d ACR in Kaiserslautern, then redesignating that squadron as 1st Sqdn, 11th ACR. That squadron then redeployed as part of the Blackhorse. All the Blackhorse soldiers who had significant time remaining to serve in Germany were sent to K-Town as members of the newly formed 2d Squadron of the Brave Rifles.
John was a gallant officer who went on to serve with distinction in the Regiment. It was my good fortune to have been his roommate in Baumholder in the summer of 1962, when I was a Cadet at West Point, serving on Army Orientation Training for a month with the Brave Rifles. Though married with a family, John, like all other members of the 3d ACR, was initially on an unaccompanied tour, living in the BOQ. In 1962, America was still on the gold standard, and our country had begun to experience an increasing outflow of gold as a trade deficit with Germany developed. Thus, when the Brave Rifles were deployed from Fort Meade to Germany in the early 1960s in response to Soviet provocations, dependents were not authorized to accompany, the belief being that all those family members would spend too much money on the economy, worsening the situation. This policy was changed by 1964, when I rejoined the 3d ACR in Kaiserslautern after graduation and commissioning in June 1963; I got to meet John’s family.
___________________________________________
Historical Note: One of our First Scholarship Recipients 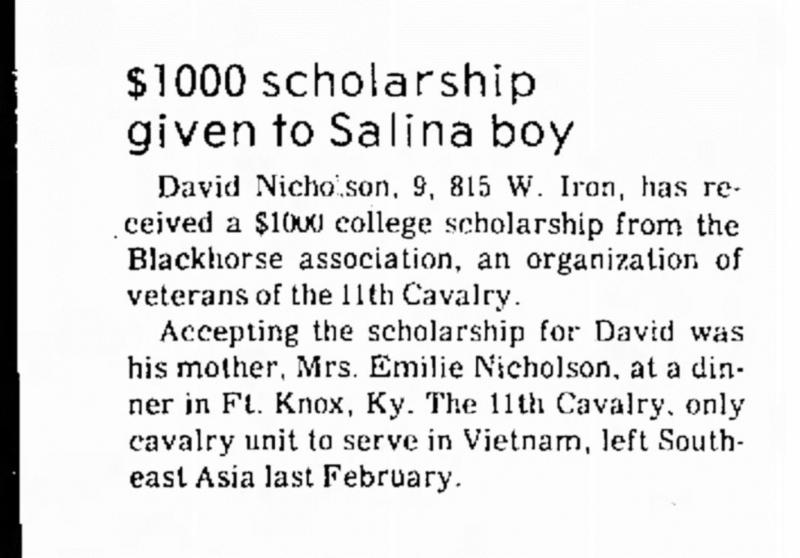 _______________________________________________
Another New Blackhorse Book
This is from Jerry L. Hensley, Captain, Co D Company, 1st Squadron, 11th ACR Sept. ’69 to May ’70:
I am sending this to you to let you know about a new book about the battle at Fire Base Illingworth. The book was written by Philip Keith, the same author that wrote "Blackhorse Riders". Although D Company played a very small role in the battle itself, we are mentioned several times in the book.
Our arrival at Illingworth had two very real impacts. First, Col Nguyen Tuong Lia (commander of the NVA 272 Regiment) stated that when he heard the rumble of the tanks in the trees not far away, he knew he had failed and could not accomplish his mission. Second, we provided a great feeling of emancipation for all of the survivors and let them know that other Americans had risked their lives to come to their aid, even if we arrived a little late.
As a member of D Company, you know that most of the feats we accomplished during our tour and in several other battles were more extensive than at Fire Base Illingworth. However, you can be proud of the part you played and the valor you exhibited.
Read more about this at http://www.amazon.com/Fire-Base-Illingworth-Remarkable-Staggering/dp/1250024951opens in a new window

Attendees are encouraged to make plans early. For reservations, please visit https://www.reseze.net/cassets/mkt/mcmelegante/landing_pages/MCM_Colorado_Blackhorse_Association.htmlopens in a new window or call (800) 981-4012 (reservations). You can phone their Front Desk directly at (719) 576-5900 (be sure to give them our Group ID number – 693108 – and say you are attending the Blackhorse reunion).

For additional lodging options, go to http://www.expedia.com/Colorado-Springs-Hotels.d602991.Travel-Guide-Hotelsopens in a new window.

If you have an item of interest to the membership that you would like to see in future eBlasts or our bi-annual newsletter, please send items directly to banditsix@nullaol.comopens in a new window. The more detail you provide the better. In particular if you have knowledge of the passing of a former member of the Regiment and want this information published, please provide details of Regimental service and/or an obituary. This is your newsletter, please contribute.

You can always find the latest news and information on the Blackhorse Association at: https://www.blackhorse.orgopens in a new window