The next Houston/SE Texas Chapter of the Blackhorse Association meeting will be Monday night, 22 October at Goode County Texas Barbecue on the Katy Freeway in Houston, Texas. The meeting will start at 6:30 pm upstairs in the balcony area. Buy your barbecue downstairs and come upstairs at 6:30 – 7:00 for dinner if you wish. Following dinner, a one-hour DVD entitled "Memories of The Fulda Gap" will be shown. The DVD is a composite from several sources and reflects highly on the efforts of the 11th ACR over 27 years of duty at "The Fulda Gap" on the East/West German Border – Frontier of Freedom. Plan to attend and participate in a great evening of camaraderie with fellow Blackhorse Troopers and friends of the Regiment. To RSVP or for more information, please email opens in a new windowranger70@nullcomcast.netcreate new email.

Silver Medallion of the Order of St. George.

Charley Watkins, our BHA secretary, has been selected to receive the Silver Medallion of the Order of St. George. This is recognition of Charley’s long and faithful service to the nation and to the armor and cavalry communities while on active duty and in volunteer work. Among Charley’s many accomplishments, he served in the Blackhorse in Vietnam as a helicopter pilot 1968-1969, part of that time as Col. George S. Patton IV’s helicopter pilot when Col. Patton was Regimental Commander. Among his many awards are the Legion of Merit, the Distinguished Flying Cross, the Bronze Star, Meritorious Service medals, the Air Medal with 31 Oak Leaf Clusters and V device, and the Army Commendation Medal with 2 oak leaf clusters and V device. Following Vietnam service, Charley was commissioned and held a variety of assignments until retirement as a Lieutenant Colonel in 1989.

Since retirement, Charley has been extremely active in veterans affairs. He has done superb work for the Veterans of Foreign Wars at both the local, state, and national level. He was a Veterans Service Officer assisting veterans with transportation to a VA hospital over 150 miles from his home, and for ten years he worked with the Veterans Administration to get a community-based Outpatient Clinic in Craig, Colorado.

In addition to his military awards, Charley has received numerous awards for his public service.

From the Recent Blackhorse Change of Command 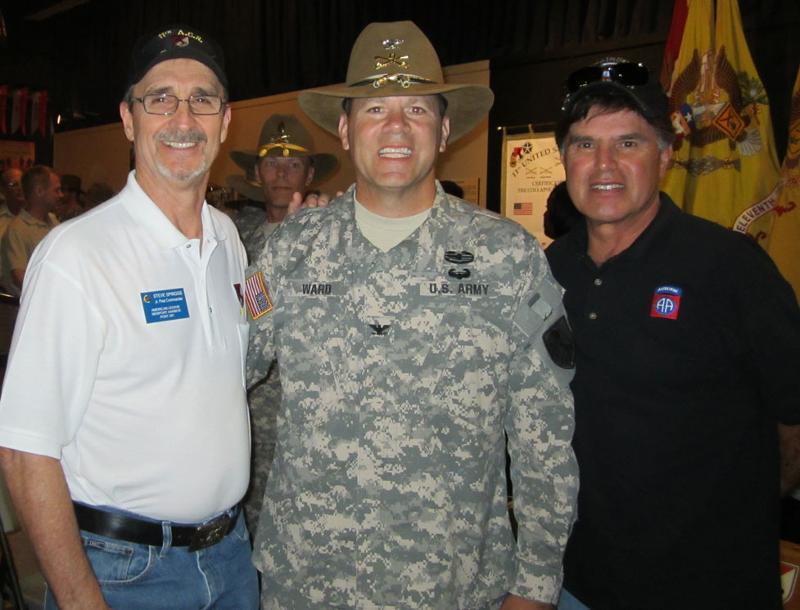 The following message comes from the Mayor of the City of Wildflecken.

This is to inform you that the Wildflecken Training Area will celebrate its 75th anniversary in July 2013. The festivities will take place on the 27th and 28th of July 2013 at the City of Wildflecken, the military garrison, and the Wildflecken Training Area (WTA). Details are still being worked on, but the plan is to have a rather big event that will involve many organizations from both the military and civilian sectors.

For 43 years, American soldiers and their families called the Wildflecken area their home and still today, US army units conduct training at WTA. Therefore, this special event is especially targeted at the soldiers, civilians, and families who spent parts of their lives here in the Wildflecken area and thus became part of the big, worldwide Wildflecken family. So, why not plan ahead and incorporate a visit of Wildflecken in your long-planned tour of Germany or have the next reunion with members of your organization here in your old home, the City and Military Garrison of Wildflecken? Fun, delicious German food, and a long, intense trip down memory lane are guaranteed!

If you’re interested in this event, please shoot me an email and I’ll put you on my mailing-list to keep you updated as things are developing. If you have any additional questions, please feel free to ask. Your POC for this event is: Mr. Heinz Leitsch, email: opens in a new windowpao@nullrhoen-res.decreate new email.

On behalf of the mayor of the City of Wildflecken – Mr. Alfred Schrenk, Heinz D. Leitsch

This is from Blackhorse Veteran, Bill Roncali: I am an IT Manager for this region for my company covering many countries in the Middle East and Europe. I am a very proud Blackhorse vet. I often stop soldiers in their place when I grab their hands and shake it with a casual Allons! One soldier the other day made the comment "Blackhorse vets are the only ones that stop and introduce each other." I often run into the patch on either shoulder of a soldier here in Afghanistan.

The Armor and Cavalry Museum

The 11th Cavalry Veterans of Vietnam and Cambodia conducted their 27th annual reunion in Orlando, FL 12-16 September. There were 1,142 people in attendance and it was well run as always by a well-run organization. If you are a Vietnam veteran of the Blackhorse and have never attended one of the ACVVC reunions, we wholeheartedly recommend it. Their reunion next year is in Indianapolis, Indiana 11-15 September.

11th Armored Cavalry Regiment will hold its annual Blackhorse Family reunion in Louisville, KY, 30 May to 2 June 2013. Hosted by the Blackhorse Association and the Gold Vault Chapter, the reunion is open to all past and present troopers who served with the Regiment, the Regimental Community, and any separate unit that supported the Regiment. COL Paul Laughlin, our 63rd Colonel and new 47th Chief of Armor, will be the keynote speaker at the banquet.

opens in a new windowCLICK HERE FOR MORE INFO AND REGISTRATION