Skip to content
Trooper Down
Major (Ret) John E. Bailey passed away March 23, 2013 at the VA hospital in Nashville, Tennessee. Born in Louisville, John was a professional soldier from 1950 to 1976 and a distinguished veteran of close combat in Vietnam. As an NCO, he served with the First Cavalry Division in Korea. He earned his commission in 1962 through Infantry OCS at Fort Benning, Georgia. John joined the 11th ACR in Kaiserslautern 1964, then served with the Blackhorse at Fort Meade and Camp Pickett prior to deployment to Vietnam in 1966. He was Commander of A Troop and later HHT, 1st Squadron in Vietnam, 1966 to 1967, participating in major combat operations, including missions in the infamous Iron Triangle region and along the Cambodian border. Promoted to Major, he returned to Vietnam in 1969 -70 as a Military Advisor and Foreign Service Specialist in the Mekong Delta. His decorations include three Bronze Stars with the V device for valor, 2 Army Commendation Medals with the V device, 2 Vietnamese Crosses of Gallantry for valor (Gold Palm and Bronze Star) and the Purple Heart for wounds received in combat. He also earned a Combat Infantry Badge (CIB) during his second tour in Vietnam. Stateside, he earned two Meritorious Service Awards, one for the development of the "Bailey Bracket," a device that allowed certain tank gunnery procedures to be completed at night, pioneering work for concepts that are standard in tank sights today. He retired in 1976 with the Regular Army rank of Major. He was a founder and charter member of Four Rivers Chapter 0585 of the Military Order of the Purple Heart and a former Kentucky State Commander of the organization.
Fran Cobb, wife of Major General (Retired) William W. Cobb (34th Colonel of the Regiment, who took the 11th ACR to Vietnam) passed away last month. Mrs. Cobb spent her entire life with him, including his final post as the U.S. Commandant in Berlin. He also commanded both the 1st and 4th Armored Divisions after leaving the Blackhorse.
________________________________________________________
German Community of Wildflecken
Pays Homage and Remembers the US Presence
By Steve Steininger
On July 26, 2013 in the small town of Wildflecken, Germany, it was hot and muggy. In my three years stationed at the "Wild Chicken", that’s one season I don’t recall well. Like many of you, I recall all of the other five seasons that place offered, but not that one. As with many vets of the "Wildflecken Experience", weather was always a topic of interest and discussion!
This past July, veteran members of several US Army units that were stationed at the Rock returned to participate in the unveiling of a memorial stone and plaque, commemorating the US presence at this US outpost and major training area (MTA) during the Cold War era, and recollecting the times surrounding this great community. Members of our own 11th ACR attended, along with those of the 3ID, the 130th EN Bde/V Corps, and a former commander of the US Military Community Activity – Wildflecken. This event was part of a larger series of celebrations focused on the 75th anniversary of the creation of the MTA this year, and was dedicated to the many years US Forces were stationed in this region. 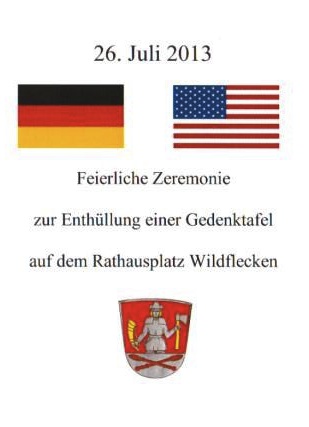 Cover the Program for the Ceremony
The event itself was a combination of speeches, military drill, music, and the POW/MIA Recognition sketch to ensure those missing from our formations were not forgotten. Over 400 people attended and participated in this wonderful event.
Wildflecken’s Bürgermeister Alfred Schrenk was the first orator. He spoke warmly of the wonderful years when the "Amis" were present in town, and he shared several personal reflections and memories as a young man participating in the town life with its US GIs. He went on to recount many examples of the personal interactions and friendships that developed – many that remain intact today – during those four-plus decades of Americans in Wildflecken. Several former Soldiers who were stationed over various periods proudly stood with their spouses, extended family members, and friends as proof of the continued connections to the local area.
Other speeches followed to include the US Consul General from Munich, Mr. William Moeller, and the German Military’s joint forces commander in Bavaria, BG Johann Berger. All vividly brought back to life that which both Germans and Americans enjoyed together from 1951 to 1994, underscoring a common theme: "The American came as occupiers and departed as friends." The U.S. Army Garrison in Grafenwöhr provided the Color Guard and senior active duty representatives to include its commander, and it executed the POC/MIA portion of the ceremony. Music was provided by the Heeresmusikkorps 12, the division band of the former 12th Panzer Division, 3ID’s former partnership unit while stationed in Germany.
At the end of the ceremony, just before the playing of the national anthems, the memorial rock and plaque were unveiled. (Note: Special appreciation goes out to LTC (Ret) Tim Stoy and CPT(Ret) Monika Stoy of the 3ID Society who pushed for years to have Wildflecken finally memorialize the American chapter of its long history with such a monument. Well Done!) 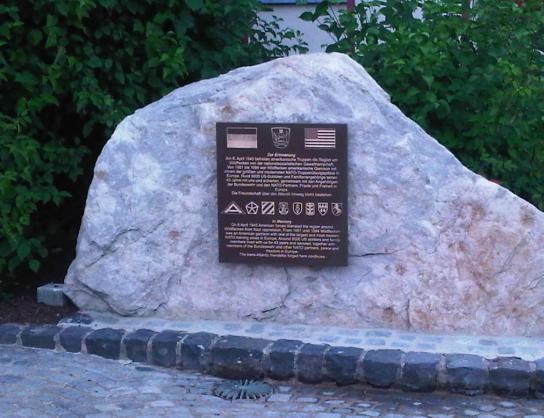 Picture of the Memorial
At the conclusion of the event, the distinguished guests were taken off the town square by re-enactors driving M151 Ford Pup jeeps. One of these vehicles was sporting 2/11 ACR bumper markings and brought back deep memories. A private reception in the Wildflecken sports field house followed where the participants enjoyed good German beer, wine, food, and hospitality. 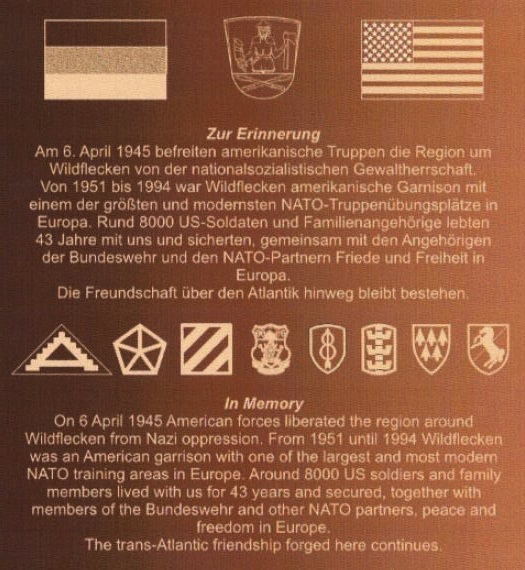 65th Colonel of the Regiment Honored 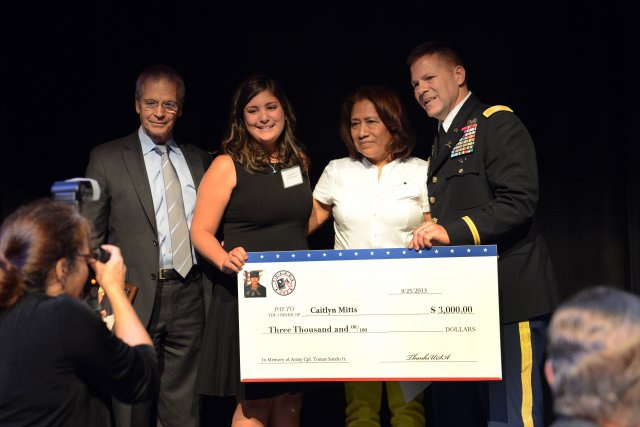 Col. Lanier Ward, and the mother of the Soldier killed in the attack that seriously wounded Ward, present a $3,000 scholarship to Caitlyn Mitts, in honor of the fallen Soldier, Cpl. Tomas Sotelo.

WASHINGTON (Army News Service, Sept. 26, 2013) — Col. Lanier Ward, commander of the 11th Armored Cavalry Regiment, was honored for his military service, Sept. 25, during an event hosted by the foundation he inspired two young girls to create.
In 2003, Ward was seriously injured by an improvised explosive device, or IED, blast in Iraq. After returning to the United States, his service inspired two neighborhood girls to create the ThanksUSA organization. The organization provides educational scholarships to the families of military service members.
Ward and his family traveled from Fort Irwin, Calif., to attend the Sept. 25 ThanksUSA 2013 Treasure our Troops Gala in Washington, D.C. He was an honoree at the event. More than 250 people attended, including Vice Chief of Staff of the Army Gen. John F. Campbell and several members of Congress.
Speaking at the event, Ward discussed a young Soldier, Cpl. Tomas Sotelo Jr., who had been killed in the same 2003 IED blast that had injured him.
Ward said the gunner and his crew were "guardian angels," who always followed in the vehicle behind his while he was in Iraq.
He said that on the night of June 27, 2003, a blast shattered the stillness and he lost an "angel," the nation lost a great Soldier, and Sotelo’s family suffered an unimaginable loss.
Lt. Gen. Raymond Mason, deputy chief of staff, Army G-4, said that Ward was severely injured in the IED explosion. His right arm was mangled, his elbow gone, and his left foot received sizable pieces of shrapnel.
"This courageous Soldier had a total of 22 surgeries in a two-year period," said Mason, adding that "incredibly" Ward deployed again to Iraq, in 2010.
Mason said that for the past decade, Ward has been part of a generation that, knowing the nation was engaged in two wars, "still kept volunteering to wear the uniform, to go into harm’s way."
Ward continues to serve something greater than himself, Mason said, in "defense of this great nation, the defense of freedom."
Ward said he had told doctors he only wished to be able to hold his "beautiful daughter Allie" again.
"I’ve been blessed far beyond that simple request ever since," he said. "I’ve been able to stand again in the ranks of my fellow Soldiers in the best Army the world has ever seen."
As Ward recovered, two young neighbors, Rachel and Kelsi Okun, then ages 10 and 8, found inspiration in him and created the ThanksUSA non-profit foundation to mobilize Americans and support the troops and their families.
The group, since its inception in 2006, has awarded more than 2,800 scholarships for a total value of nearly $8.5 million.
One such scholarship, in honor of Sotelo, was announced by Ward that evening. The scholarship recipient was Caitlyn Mitts, whose father, Air National Guard Staff Sgt. Charles Mitts, was killed in a training accident in 2009 at Texas A&M University. She is currently a junior at the same school.
Mitts, who said being on campus is a constant remind of her father’s passing, said she hopes to work for the FBI, as her father had. She said the night was emotional, but that the scholarship is a great way to honor both Sotelo and her father.
"I feel very thankful and blessed because without this I wouldn’t be able to go further into my college career and everything that I want to do," said Mitts, whose scholarship is for $3,000.
________________________________________________________
Reminder – 2014 Blackhorse Association Reunion
Colorado Springs June 12 – 15, 2014

Attendees are encouraged to make plans early. For reservations, please visit opens in a new windowhttps://www.reseze.net/cassets/mkt/mcmelegante/landing_pages/MCM_Colorado_Blackhorse_Association.html or call (800) 981-4012 (reservations). You can phone their Front Desk directly at (719) 576-5900 (be sure to give them our Group ID number – 693108 – and say you are attending the Blackhorse reunion).

For additional lodging options, go to opens in a new window http://www.expedia.com/Colorado-Springs-Hotels.d602991.Travel-Guide-Hotels.