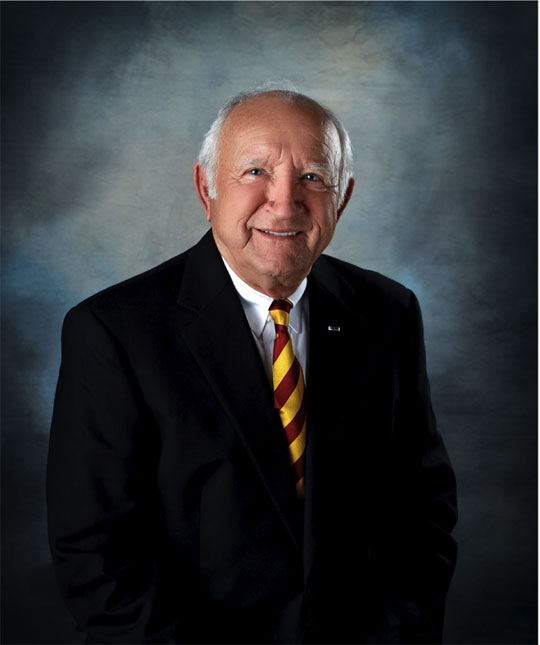 Thibodaux, Louisiana – Brigadier General John Sherman Crow (Retired) has been selected as a 2012 recipient of the prestigious Order of Saint George, Gold Medallion for his years of outstanding service to Armor and Cavalry and his untiring support to the United States Cavalry, the Armor Association, and the Blackhorse Association.

Crow will be presented the award in Columbus, Georgia on 19 September 2012 at the Doughboy and Saint George Banquet during the annual US Army Maneuver Warfighting Conference at Fort Benning. He joins the 44 living and 19 deceased recipients of this US Cavalry and Armor Association’s most prestigious award.

John Sherman Crow was commissioned a 2nd Lt. of Cavalry on graduation from Northwestern State College of Louisiana in the late 1950s. He entered active duty at Fort Knox, Kentucky as a Cavalry Officer and began what led to an extensive and impressive command history. He commanded a Cavalry Platoon and Troop in the 3rd Armored Cavalry Regiment and a Tank Company in 3rd Armored Division, and he was an advisor to the 2nd Vietnamese Cavalry and 9th Vietnamese Infantry Division. He commanded one of the first Chieftain Tank Squadrons in the 11th Hussars (Prince Albert’s Own), a British Cavalry Regiment posted in north Germany. He later commanded 3rd Squadron, 3rd Armored Cavalry Regiment followed by command of the 11th Armored Cavalry Regiment (Blackhorse) in Fulda, Germany. His last tactical command was as Commanding General, 2nd Armored Division (Forward) in northern Germany. His last posting prior to retirement in the late 1980s was as Deputy Commanding General, U.S. Army Japan.

Crow had an equally impressive series of staff assignments on the Army Staff in tank development and as Deputy Director for Operations, Office of the Joint Chiefs of Staff.

General Crow received the MBA degree from the University of Alabama in 1973, graduated from the National War College in 1979, and was made a National Institute of Higher Defense Studies Fellow in 1983.

He is a decorated combat veteran with over 25 awards for valor and meritorious service.

In the Spring of 1991 at the ceremonies in Radcliffe, KY, John L. McKillip, son of Lloyd McKillip, who served with C Troop in Vietnam 1967-1968, was awarded a Blackhorse Scholarship. The scholarship went towards his tuition costs his senior year as an undergraduate, and the first year of graduate school at Washington State University in Pullman, WA in the early 1990s. He completed his Ph.D. there in microbiology in 1997 and is now on the faculty at Ball State University in Muncie, IN, teaching microbiology and doing research with students. In his words: "The Blackhorse Scholarship was a huge part of making all of this possible and I still have fond memories of the ceremony that evening over 20 years ago. Now I am quite interested in giving back – donating to the scholarship fund that so generously helped me then. Thank you."

Congratulations to Dr. McKillip on his many accomplishments, and the Association sincerely thanks him for his donation to the scholarship fund.

Neil Morrison, the curator of the National Training Center and 11th ACR Museum at Fort Irwin for many years, has retired. Selected to replace him, at least temporarily, is SSG Michael McLean as NCOIC and 1Lt Bei Bao as OIC. SSG McLean started at the Museum last December, working with Neil Morrison just prior to Neil’s retirement in March. When Neil retired, SSG McLean was put in charge of the Museum. In June, 1LT Bao was assigned as OIC and SSG Mclean remains as NCOIC.

SSG McLean began his military career with four years in the Marine Corps, in Aviation Weather Support. He then joined the Army as an Abrams Maintainer, spending 7 years as a Maintenance Team Chief. During his 17 years of military service, he has had 4 combat deployments, 2 with the 4th ID, and 2 with the 1st AD.

"I consider it a privilege to manage this Museum, and I believe in honoring our Veterans and protecting our History and our traditions. Recently I have worked to increase awareness of the Museum by placing posters and ads around Fort Irwin."

The following note is from Scot Aitcheson. As many of you may know, OP Romeo was the victim of significant vandalism not long ago. Scot has taken the initiative to restore OP Romeo as a permanent reminder of the Regiment’s service during the Cold War on the East-West German Border.

"I had an interesting weekend out at Romeo. We were finally able to coordinate a meeting with our contact from Bosserode, Hr. Koch from the local historical society. My family and I arrived at the site and were warmly greeted by Hr. Koch, Buergermeister Grau, and Hr. Gliem, the former BGS liaison in the area. What we thought would be a short meet-and-greet turned into a very formal, lengthy discussion about the Wildeck township and their desire to keep the memory of the border alive.

I will be having another meeting with Hr. Gliem in the coming weeks to go to Grenzpfad 7 (between OP Romeo and Grenzpfad 6 in Obersuhl) where they are establishing a border museum. Gliem worked mostly with the MI staff and was not familiar with the specific names of the 3/11 officers or NCOs that may have been there. Coincidentally, his daughter married a Blackhorse trooper from Fulda. I’ll follow up with everyone and include pictures of the visit at that time.

I hope this finds everyone well and am glad to be a part of this project. I look forward to your thoughts and feedback as this project continues to develop. As always, please let me know if there is anything you would like me to do in the interim.

NORTHERN CALIFORNIA CHAPTER. The Northern California Blackhorse Chapter held its 22nd Annual Northern California Blackhorse Potluck/BBQ on 11 August in Davis, California; it was organized by longtime member Ron Krueger. The event was attended by 67 men and spouses – most of the men were Vietnam veterans. Attendees came from Colorado, Oregon, Arizona, and all over California. It was 108 degrees during the BBQ, and this heat probably kept some attendees from coming. Ron is also working on getting the guys around Colorado Springs to have get-togethers. Ron’s contact info is ronkrue@nullhotmail.comopens in a new window.

GOLD VAULT CHAPTER. The Gold Vault Chapter in northern Kentucky (mostly around Louisville) conducted its annual summer picnic on Saturday, 18 August. Approximately 50 people attended and the food was plentiful. Richard Wells, the President of the chapter, and Rondo Jackson, the Secretary, were the honchos of the picnic and the perfect weather helped make it successful. Rondo conducted his usual excellent silent auction of unique items. The attendees were paid a visit by some scouts from cavalryscouts.orgopens in a new window and there were lots of tall tales told.

The following was provided by Sam Rhodes, a squadron Command Sergeant Major during the Iraq deployment. Sam is currently on Bob Hurt’s Scholarship assessment team. Sam’s contact info is samuel.marvin.rhodes@nullgmail.comopens in a new window.

"I need your help to support the next Wounded Warrior Horsemanship Event scheduled for 6 October, 2012 at Fort Benning’s Wetherby Field from 0930-1400 hours. Volunteers and horses are needed. To help, please email warrioroutreach@nullgmail.comopens in a new window or check out the updated website Warrioroutreach.orgopens in a new window. It is estimated that about 1000 soldiers, families and veterans will attend. Please let me know if you can support (Donations, Horses, Sponsorships or Volunteers)."

Warrior Outreach Inc. Mission Statement – Provide Soldiers, Veterans and their Families from all of America’s conflicts an opportunity to connect with horses and receive group-level Equine Assistance Training. We strive to give OIF and OEF
(Operation Iraqi Freedom, Operation Enduring Freedom – Afghanistan) and all Veterans the confidence to achieve long-term individual and family success. We are staffed entirely by volunteers and are privately funded by your donations. 100% of your contributions go to providing support to those who need it the most. We are totally independent of, and not affiliated with, any other horsemanship program. The Wounded Warrior Horsemanship Program was founded in 2008 by CSM (ret.) Sam Rhodes and was converted into Warrior Outreach Inc. (a Georgia nonprofit organization) in 2012.

11th Armored Cavalry Regiment will hold its annual Blackhorse Family reunion in Louisville, KY, 30 May to 2 June 2013. Hosted by the Blackhorse Association and the Gold Vault Chapter, the reunion is open to all past and present troopers who served with the Regiment, the Regimental Community, and any separate unit that supported the Regiment.