Paul passed away peacefully in his home on August 20, 2013 in Black Diamond, Washington at the age of 59. Paul entered the Army in 1987 and upon graduating AIT as a 67V Observation Helicopter Repairer, he requested assignment overseas. Paul was assigned to the T Troop, 4/11 ACR in Fulda, Germany (1987-1990). While assigned to the Thunderhorse Squadron, he excelled by achieving Soldier of the Month and Soldier of the Quarter awards, and he achieved the rank of Sergeant. As a true cavalry man, of the many awards he has received, the award that he cherished and talked most often of was the Order of the Spur award, which he received in 1989. Paul PCSd to Fort Hood Texas in 1990 and shortly after his arrival, he deployed with Co A 1/3D AVN AHB to Iraq. Paul ETSd from the Army in 1991. Funeral Services and burial for Paul will be at Tahoma National Cemetery in Covington, Washington May 26, 2014. The address is 18600 SE 240th St., Kent, WA 98042. The exact time has not yet been determined for the service. Please call 425-413-9614 in May 2014 for information on the time of the service.

And You Thought the Desert Was Dry!

Below are some pictures from Fort Irwin after a recent rain storm and flash flood. With no ground cover to slow down or soak up the water, this is what happens. Photo is courtesy of Jack Morrison. 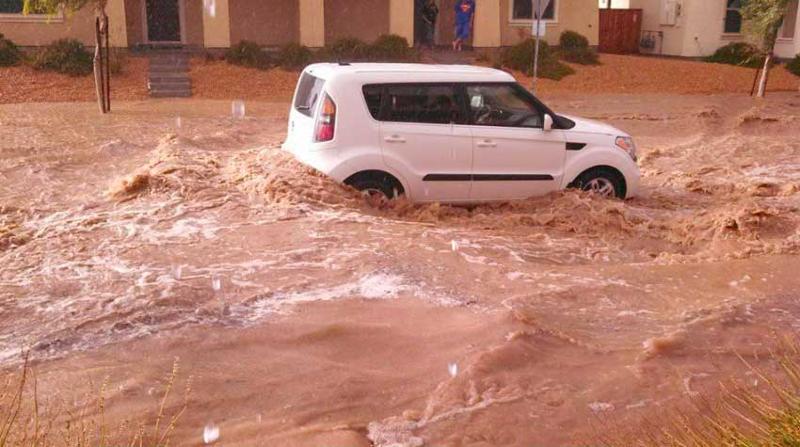 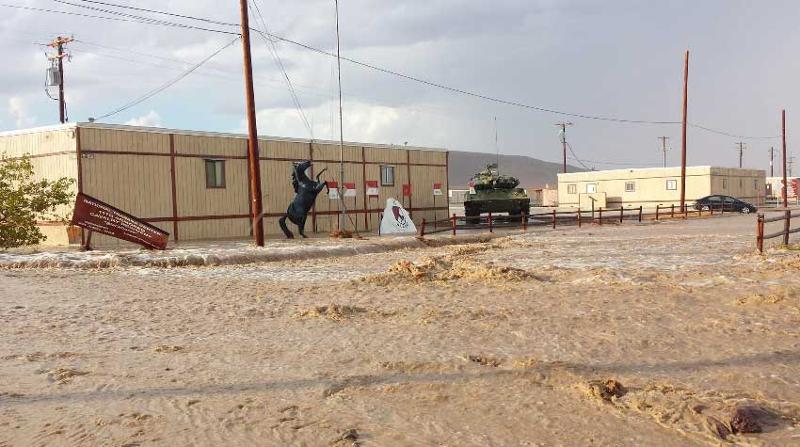 The Origins of the Regiment’s Nickname

The following was provided by Don Snedeker, our Regimental Historian.

I have recently been digging in some 1920s and 1930s editions of the Los Angeles Times (on line, through the Pentagon Library). I came up with some articles about the Regiment that have led me to write the following.

Origin of the Blackhorse Name

The appellation ‘Blackhorse Regiment’ started back in the 1920s and 30s when the 11th Cavalry was stationed on the West Coast. It was peacetime, and Troopers spent a lot of time riding in parades, participating in local horse shows, and demonstrating their riding skills at local, county, and state fairs. The 11th Cavalry polo team was a force to be reckoned with up and down U.S. Highway 101. Troopers were even featured in a number of movies. In 1925, they worked as extras in the chariot scene in Cecil B. DeMille’s epic, The Ten Commandments. Four years later, Troopers mounted up for the film Troopers Three – written by one of their own, former 11th Cavalryman and World War I veteran, Arthur Guy Empey.

Many of these roles were filled by the Troopers stationed at Fort Rosecrans, near San Diego. Officially the men were there to patrol the Mexican border, but many hours were dedicated to their ‘unofficial’ missions — support to Hollywood, Pasadena parades, and LA’s Pageant of Progress. It was probably their unofficial public and film appearances that caused First Squadron’s Bravo Troop in the early 1930s to mount Troopers exclusively on black horses. In a publicity-savvy town like Hollywood, they of course became known as the “Black Horse” troop. The 12th Colonel of the Regiment, Colonel Ben Lear, recognized a good morale booster when he saw one, and soon most of the unit was riding on black horses. By 1938, the Troopers were no longer at Ft. Rosecrans, but they rode their black horses alongside megastar Ronald Reagan in the film Sergeant Murphy. From that time forward, the 11th Cavalry was known throughout the Army as the Blackhorse Regiment.

Planning for the relocation of the 11th Cavalry memorial from Fort Knox to the planned new National Armor and Cavalry Museum at Fort Benning has begun. It is anticipated that the first phase of development of the National Armor and Cavalry Museum will be completed by November 2013. Our goal is to complete the move and construction of the new memorial site no later than the end of 2014. This gives us approximately eighteen months to complete the project.

The entire memorial complex will be moved, including the large Vietnam Memorial; the three memorials (obelisks), which are dedicated to the Philippine, World War II, and Iraqi Freedom campaigns; plus the nearly 1,100 granite bricks that surround the memorial. All bricks will be catalogued prior to the move and will be placed in the new location in the same relative position.

The cost of the move will be shared between the Blackhorse Association and the 11th Armored Cavalry’s Veterans of Vietnam and Cambodia. To help offset the cost of this project, both organizations will be offering new granite bricks.

Anyone can purchase a memorial brick for $100. Memorial bricks are a lasting tribute of your service to our regiment, and they enable all of us to participate and show our support for our fellow Blackhorse troopers, whose names are listed on the memorials. The bricks measure 8 x 4 x 2 inches and can accommodate inscriptions of up to three lines of 15 characters per line. Many have chosen to have their name, unit, and years of service with the regiment inscribed on their brick, while others have chosen to have a special message inscribed.

Please help us move our memorial monument to Fort Benning by purchasing one or more bricks. If we are able to raise more funds than needed for the move of the monument with this paver offer, any excess funds will be put into the Blackhorse Association Scholarship Fund.

The listings below are for those who have made exceptional donations to our association’s scholarship fund. A current listing can always be found at our website. A sincere thanks goes out to these generous donors.

Allons Club Members as of 1 August 2013 (members or non-members who commit to donating $1000 a year towards the Scholarship Fund):

Everyone is welcomed to join us for a casual picnic in the park. Bring something to the BBQ, something to share (salad, dessert, or munchies), and your beverage of choice.

Directions: I-80 to Davis. Take the Mace Blvd exit. Go North around bend (Mace becomes Covell Blvd.). Turn Left on Monarch Ln. Take 1st right onto Temple. The park is one block ahead on left.

I-5. to Woodland, exit at Road 102 to Davis. Proceed South to Davis, approx. 8 miles. Turn left at the 1st major intersection – Covell Blvd. Go about 1 mile to Monarch Blvd, turn right, go 1 block. Turn right onto Temple. The park is 1 block ahead on left.