The Blackhorse Marathon(Note: As stated below, this event is open only to Fort Irwin participants.)

The following note was sent to the daughters of MG (Ret.) Robert J. Sunell, 48th Colonel of the Blackhorse

and its Veteran’s Organization, the Blackhorse Association, are sponsoring a marathon

in honor of your Father.

This year, we will have a limited opportunity for members of the Fort Irwin, California installation to participate in the run on September 25; however, we look forward to future years when this can be open to a larger audience.

Your father initiated this run in Fulda Germany, and we feel it is important to honor his memory and intention of promoting a better understanding between Soldiers and the people they serve.

At this link you will see a promotional video: https://www.youtube.com/watch?v=_l7Xj9yBFZY

The following is a poster promoting the marathon. 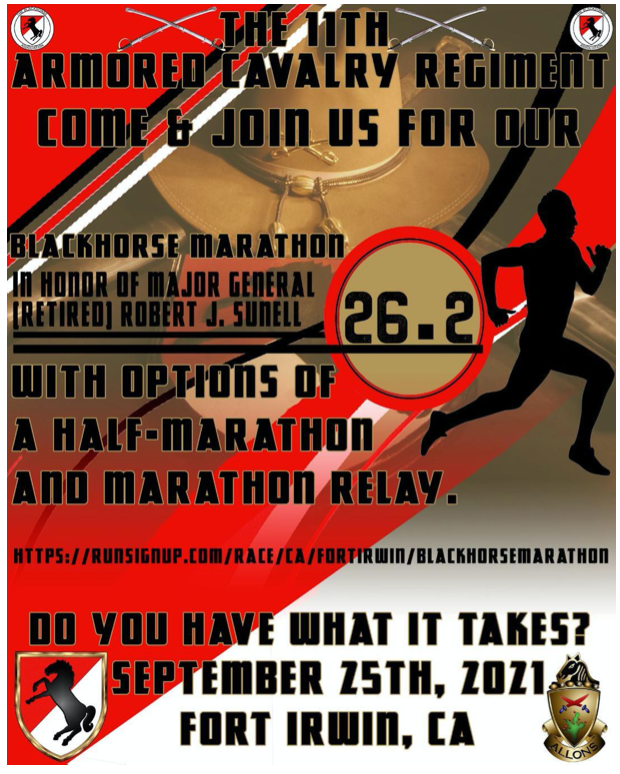 I am an Ambassador with the Oklahoma Military Hall of Fame.

This year we are inducting Joe Thomas into our Hall of Fame Class of 2021. We selected seven from over a hundred nominees. Joe was a SP4 combat medic with the 11th ACR when he was killed in action and awarded the DSC.

This following notice went out to his family and friends. Friends of Joe Thomas:

The Board of the Oklahoma Military Hall of Fame announced there will be seven inductees for the Class of 2021 of the prestigious Oklahoma Military Hall of Fame. The highest rated selection was SP4 Joe Thomas (Booker T. Washington HS Class of 1965). The Induction Banquet will be held on Saturday evening October 23 in Norman. The Classes of 2020 and 2021 will be inducted together. Since 1998, just over 200 Oklahoma veterans have been selected from thousands of nominations.

The Hall of Fame made this announcement via a Facebook post and internal email. A formal press release to the media will be in September. See https://okmhf.org for more information about the Hall of Fame.

Annette (Thomas) Thompson is representing the family, and she is being assisted by DeLores Thomas and Mary Thomas. Also, local West Point and Naval Academy grads are funding a special exhibit at his high school honoring him and another Hall of Fame inductee.

If you know of anyone in Oklahoma who should be invited to the event or receive an announcement by postal mail, please contact me by phone to discuss.