First Sergeant Jim Greeley. Trooper James “Jim” Greeley passed away in Baton Rouge, Louisiana on January 22, 2020. Jim was an unforgettable character and a loyal member of the Regiment. He attended many reunions and was always ready with a good laugh and lots of stories.

1SG Greeley served with the Regiment in Fulda from 1979-1981. During that time, he was a Platoon Sergeant in A Troop 1st Squadron and later became the Regimental Training NCO in the Regimental S3 shop. He also served as the NCO in charge of the Regimental Tactical Command Post and was fondly referred to as “Ma Greeley” for the way he took care of all of the troops in the TAC. He could literally find anything you needed day or night.

Jim served in numerous units and had several tours in Vietnam and Europe. With his larger than life personality, his quick wit, and sense of humor, he left a memorable mark wherever he served. He retired to Baton Rouge after nearly 30 years of service where he had a successful second career and enjoyed his favorite hobby which was fishing. He is survived by his wife Charlotte.

“I was saddened to learn of 1SG Jim Greeley’s death. Jim Greeley epitomized the spirited Cavalry NCO in his every step, a fun-loving Cajun who was equally attentive to being tactically and technically proficient. He ran our TAC CP (Blackhorse Oscar) with the precision of a fine orchestra leader — so much so that we were asked by General Bob Wagner, ADC, 3d ID to tape record our command net for him to use to train his brigades.

“On a personal note, I will never forget a Sunday in Fulda when our doorbell rang and there stood Jim and Charlotte with a half bushel of fresh oysters. Lord only knows where he got them but we enjoyed oysters on the half shell and Hochstift for lunch.

“In retirement, Colonel (ret.) Joe Sutton and I were able to visit Jim at his fish camp near Grand Isle, Louisiana several times and we regularly caught limit of specs and redfish. He loved his fish camp.”

“I always felt blessed to have Jim as a friend and knew he was one I could count on. I will miss him dearly.”

With Jim’s passing, The Blackhorse lost a great trooper. Allons!

“Larry passed away at 11:55 p.m., Sunday, March 15, 2020. He went very peacefully and with no pain. Larry spoke proudly of his time in the service and of the many men he had the good fortune to serve with. Thank you for your condolences.”

Larry R. “Buster” Muniz, 56, died peacefully Sunday, March 15, 2020, at Hospice of Mercy in Hiawatha, Iowa. Local services will be private. Burial with full military rites will be held at a later date at the National Memorial Cemetery in Phoenix, Arizona.

Larry was born June 6, 1963, in Tempe, Arizona, the son of Larry Muniz and Rita Trujillo Muniz. He attended Trevor Brown High School and ITT Technical Institute in Arizona, graduating with a Bachelor’s degree. Larry was proud to serve in the US Army from June 4, 1981 through July 31, 2001 where he drove a tank and was an instructor. He also was a volunteer firefighter/EMT while stationed in KY. Larry was stationed in Germany when the Berlin Wall “came down.” After retiring from the Army, he worked for the TSA and was active in the Shriners. He enjoyed everything Disney and was an avid Arizona Cardinals fan. Larry loved spending time with his family. On June 2, 2018, Larry was united in marriage to Sherry (Grigg) Tyler in Cedar Rapids, Iowa.

The following is a comment from one of his Killer Troop Commanders, then-Captain Jim Shufelt (COL, ret.):

“SFC Larry Muniz will never be forgotten by his fellow troopers from Killer Troop, 3/11 ACR. A consummate professional Armor noncommissioned officer, Larry was a key member of one of the finest organizations with which I have ever served. During our time in K Troop, Larry served as an M1 Abrams Tank Commander, first as a Sergeant (E-5), which was quite an honor, and then as a Staff Sergeant (E-6). His technical competence and leadership skills were evident as his tank always qualified at the Superior or Distinguished Level in Annual Gunnery, which contributed to his selection to attend the prestigious M1 Tank Master Gunner’s course. Whether patrolling the Inter- German border, firing tank gunnery at Grafenwoehr, training at Hohenfels, or charging around the German countryside on unit maneuvers, Larry was always self-confident, independent-minded, more than occasionally outspoken, and always well-respected by his fellow troopers, regardless of their rank or duty position. We know Larry is impatiently waiting for us at Fiddler’s Green, ready for another round of good German beer and a few more cavalry tall tales. Allons brother!”

This comment is from one of his Killer Troop Commanders, then-Captain Karl Schmidt (LT COL, ret.):

“Larry Muniz was a great BLACKHORSE Trooper! Larry was the Killer Troop Master Gunner and Killer-66 gunner doing double duty running the tank training and tank ranges while ALWAYS qualifying his tank. Larry received a special by-name request to join CPT Karl Schmidt, his Killer Troop Commander that was given a second Company Command in West Berlin, Germany to be the Berlin Brigade Tank Company Master Gunner as the Brigade was receiving M1A1’s. The Regiment approved the request for Larry to depart Killer Troop, 3/11 ACR, and he subsequently went to Berlin and repeated his success in the Regiment by bringing the BLACKHORSE rigor to tank gunnery training in Berlin.”

The Association received many more tributes from those who served with Larry in the Regiment.

Jay Ward. LTC (ret.) James “Jay” A. Ward, Jr. passed away in January, and we have his obituary below. Jay served the Blackhorse in Vietnam and Germany; he was commander of Bravo Troop, 1st Squadron, 11th Armored Cavalry Regiment in the mid- to-late 1970s. The Association sends our condolences to Jay’s family, friends, and fellow troopers. 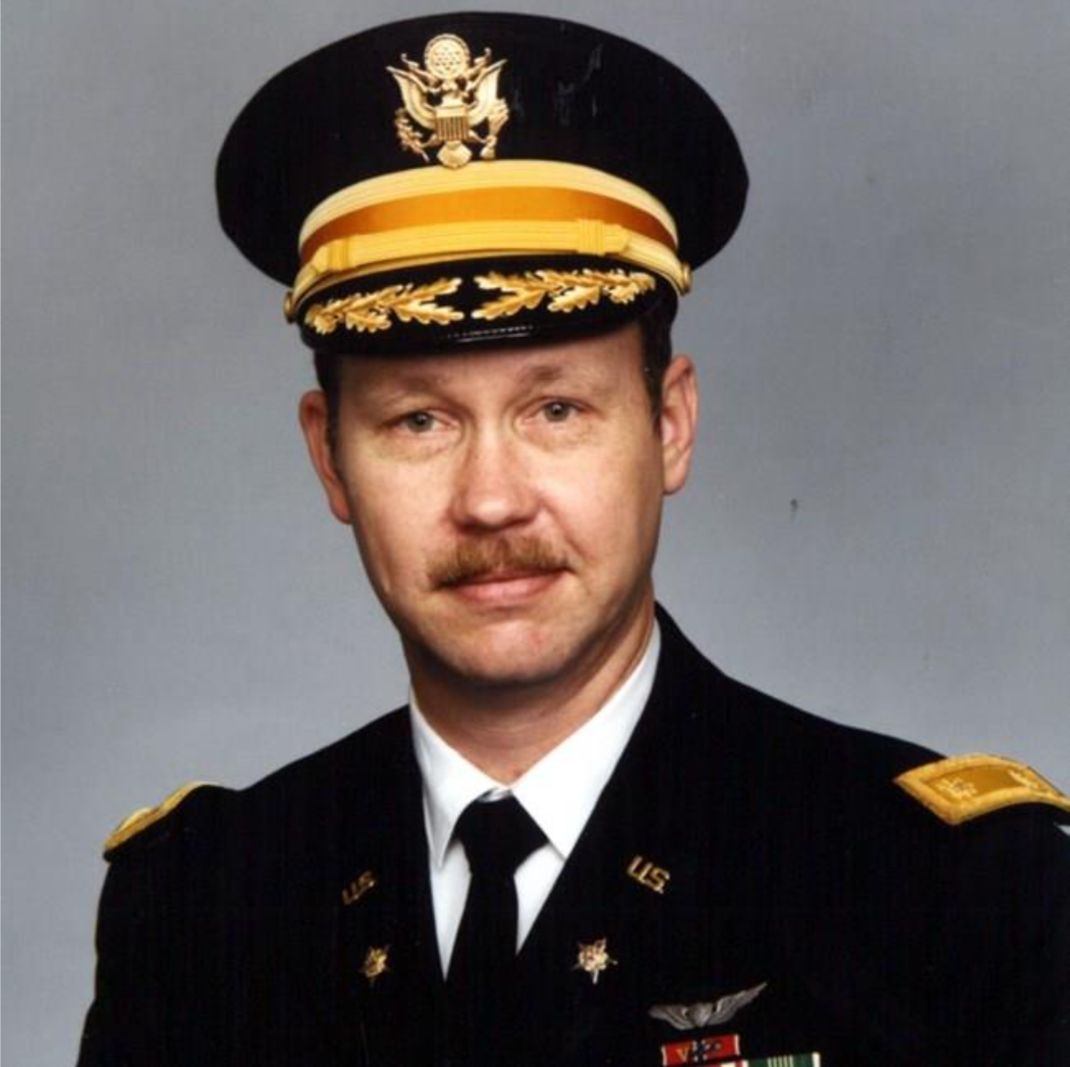 James (Jay) Armour Ward, Jr., Lt. Col. (Retired), passed away on January 23, 2020, at the age of 74. He was the beloved husband of Judith (Judi) for 41 years and the loving dad of Jennifer (Brett Sterly) Ward and Jamie (Edmund) White. Jay cherished his dogs Mannheim and Muffin and was proud of his grand-dogs Maui and Robey.

He was the little brother of Tressa Burnett and uncle to Chris “Bird” (Dion), Tim (Yvette), Deena, and Susan (Frank). He was the brother-in-law of Ronald (Marie) Seeger, LeRoy (Carolyn) Seeger, and the late Joanne Haebich and uncle to Ronnie (Jackie), Cheri (Jeff), Jill (Mike), Ryan, Beth, and Sara (Gregory). He was the great uncle of Ashley (Mark), Emily (Dan), and Brady.

Jay was Sooner-born on November 3, 1945, to Louise and Armour Ward and Sooner- bred in Norman, Oklahoma. He spent his early years in Venezuela, where his father worked for an oil company. They returned to Norman in the late 1940s and spent his childhood pressing pennies on the railroad tracks behind his house on Maple Lane; he was an active member of the Boy Scouts. His summers were spent at the Rocky Mountain Biological Research Laboratory in Gothic, Colorado, where his mother was in charge of dining services. In high school, he played handball and basketball, winning the state championship in 1963. Jay began attending the University of Oklahoma in 1964, initially majoring in pool before getting his act together and changing his focus to political science.

While at OU, he joined ROTC which led to his joining the army in 1968. Jay joined as a Second Lieutenant and served in Vietnam from 1969 to 1970, where he commanded tanks in the 1st Squadron, 4th Cavalry (part of the 1st Infantry Division, the “Big Red One”) and the 2nd Squadron, 11th Armored Cavalry Regiment (the Blackhorse Regiment). While serving, he met lifelong brothers-in-arms Jim Pitts, Carl “Skip” Bell, Tim O’Brien, Bob Klinkerman, and countless others. He was wounded and was awarded the Purple Heart. After Vietnam, he finished that degree in political science and was stationed in Fulda, Germany as a Captain. It was during this time in Fulda that he met Judi, a teacher with the Department of Defense Dependents Schools, in 1975.
His next station was in Tallahassee, Florida, where he taught ROTC at Florida A & M University. He asked Judi to marry him on a road trip to New York and they were married in 1978. They welcomed their first daughter, Jennifer, while in Tallahassee. In 1980, orders came through to go back to Germany, where their second daughter, Jamie, was born. After returning stateside, he earned his MBA from the Florida Institute of Technology. He was promoted to Lieutenant Colonel in 1988. The family transferred to Gurnee, Illinois, where he retired as a Lieutenant Colonel in 1993 after his last assignment at USMEPCOM at Great Lakes.

During his time in Gurnee, he completed all coursework towards his doctorate (ABD) in continuing adult education from NIU. After retiring from the army, he spent 12 years at the Cook Memorial Public Library as the network administrator, retiring in 2006. He had a natural interest in a broad range of subjects, particularly genealogy and military

history. He spent countless hours with his sister in libraries, archives, county court houses, and churches digging into the histories of the Ward, O’Neil, and Seeger family lines. Several of his genealogy compilations were award winning in the State of Oklahoma. Jay was an avid birder, gardener, and cook. He always had a pair of binoculars in the car, ready to pull over during migratory season to watch the birds, ducks, and geese that came to the area. We will terribly miss his sense of mischievous humor, quick wit, and gentle spirit.

Visitation will be held Wednesday, January 29, 2020 from 10 AM to 2 PM at Marsh Funeral Home, 305 N. Cemetery Rd, Gurnee. The funeral service will begin at 2 PM at the funeral home. Interment will be private at West Lawn Memorial Park in Racine. In lieu of flowers please consider making a donation to the Rocky Mountain Biological Research Institute, https://www.rmbl.org/donations/. 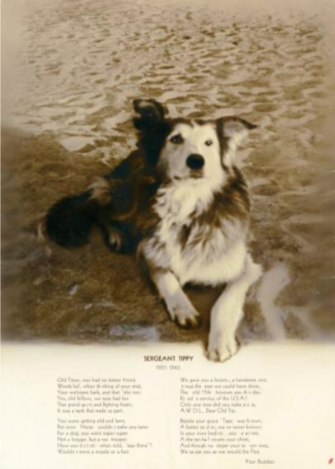 Old Timer, man had no better friend
Words fail, when thinking of your end,
Your welcome bark, and that ‘dry run’,
Yes’ old fellow, we sure had fun
That grand spirit and fighting heart,
It was a tank that made us part.

You were getting old and lame,
But even Horse couldn’t make you tame,
For a dog, you were super super
Not a beggar, but a real trooper
How you’d sit still when told, “Stay There!”
Wouldn’t move a muscle or a hair.

We gave you a funeral, a handsome one,
It was the best we could have done,
The old 11th honors you this day,
Killed in service of the U.S.A.!
Only one time did you make a slip,
A.W.O.L., Dear Old Tip.

Beside your grave, Taps was blown,
A better soldier, we’ve never known,
In your own bed roll, you are at rest,
A shelter-half covers your chest,
And though no longer your tail can wag,
We salute you as we would the flag.

“The Blackhorse in Vietnam”
By Don Snedeker 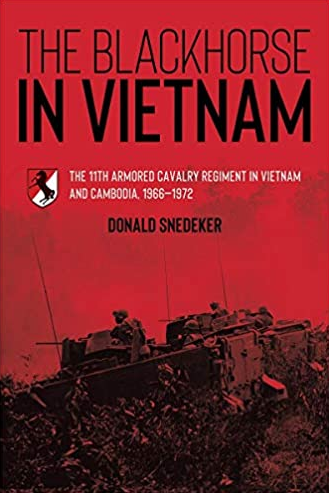 Now available:
Purchase the e-book on Amazon.com
or visit this link.