General McEnery also was awarded the Distinguished Service Cross for his actions in the Michelin Rubber Plantation during Operation Atlas Wedge, March 1969. 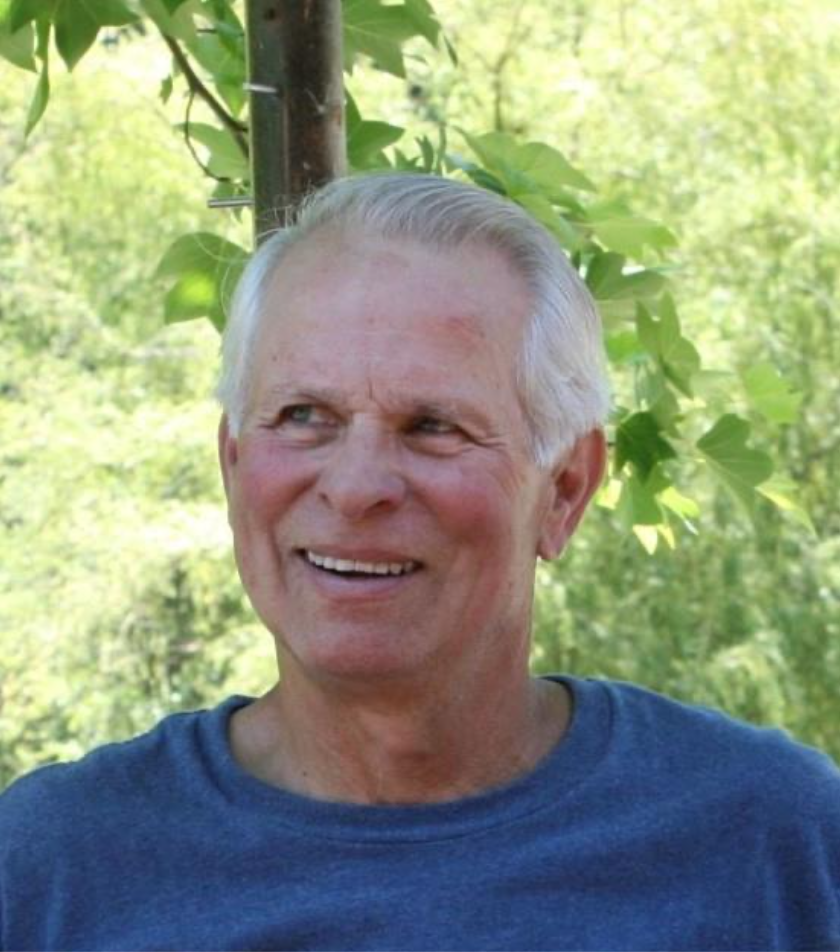 Edward “Allen” White, age 78, passed away peacefully at his home on March 14, 2021. He was born in Phoenix, Arizona and raised in Glendale; he was a longtime resident of the Bay Area where he owned his own business selling custom tailored suits and men’s shoes in downtown San Francisco. After selling his business, he retired to Poker Bar, CA, where he has resided for the past 15 years.

He loved the outdoors and enjoyed hunting, fishing, golfing, gardening; and he spent many evenings viewing the stars from his hammock overlooking the Trinity River with his beloved black lab, Ebony, by his side.

Per his wishes, there will be no service. A celebration of his life will be held at a later time.

In lieu of flowers, please donate to: Wounded Warrior Project at https://www.woundedwarriorproject.org/donate 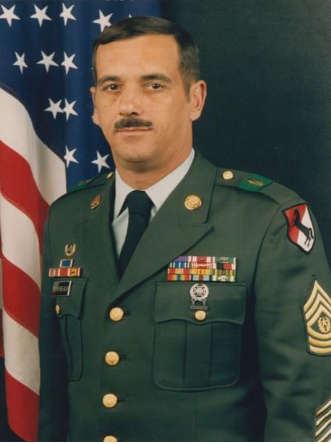 In February 1959, Ned enlisted in the United States Army. His first duty assignment was with the 3rd Squadron 2nd Armored Cavalry Regiment in Amberg, Germany as tanker, scout, and border operations trooper. Ned loved Amberg and Gearhart, and they were his favorite small towns for the rest of his life. He subsequently served in a variety of Armor/Armored Cavalry units (Charlie Troop, 2nd Armored Cavalry as 1SG with then- CPT Luke – a commander and 1SG match made in Cavalry heaven) as well as instructor, advisor, and operations sergeant assignments. During 1985-86, he served as the US Army Europe Operations Sergeant Major in Heidelberg. Besides service in Germany, he served in the United States and Vietnam; in Vietnam he was wounded in action with the South Vietnamese 11th Cavalry Squadron in Quang Tri province.

His final Army assignment was as the Command Sergeant Major of the 3d Squadron, 11th Armored Cavalry Regiment (Blackhorse) in Bad Hersfeld, Germany. During this assignment, he revitalized the Squadron’s Noncommissioned Officer (NCO) Corps and reactivated the NCO Spur Program that increased the unit’s Esprit de Corps immensely. During this same time, he worked to establish two new partnership units with NATO units – the British Blues and Royals and the 1st Royal Tank Regiment. These partnerships increased unit working knowledge of allied unit operations and built a bond with the British units that last to this day for many of the soldiers involved.

After the Army, he worked in the residential construction industry culminating with over twelve years as a safety consultant for Contractors Insurance Services. He was a life member of several veterans-related associations. Closest to him was the 2nd Cavalry Association where he spent eight years (June 2006-Present) as the editor of the Association’s newsletter “The Thoroughbred” and continued being a Sergeant Major with his advising the association’s president, which he thoroughly enjoyed.

He is survived by Doris, his wife of 55 years, who he met and wooed while assigned to the tank company in West Berlin; son Edmund IV (wife Rebecca); granddaughter Dorian (Concord, NC); grandson Levi (Depauw, IN); twin grandchildren Josie and Hunter of Portland; and great-grandson Cohen (Depauw, IN), who will soon be joined with a second great-grandson who will live in Portland. 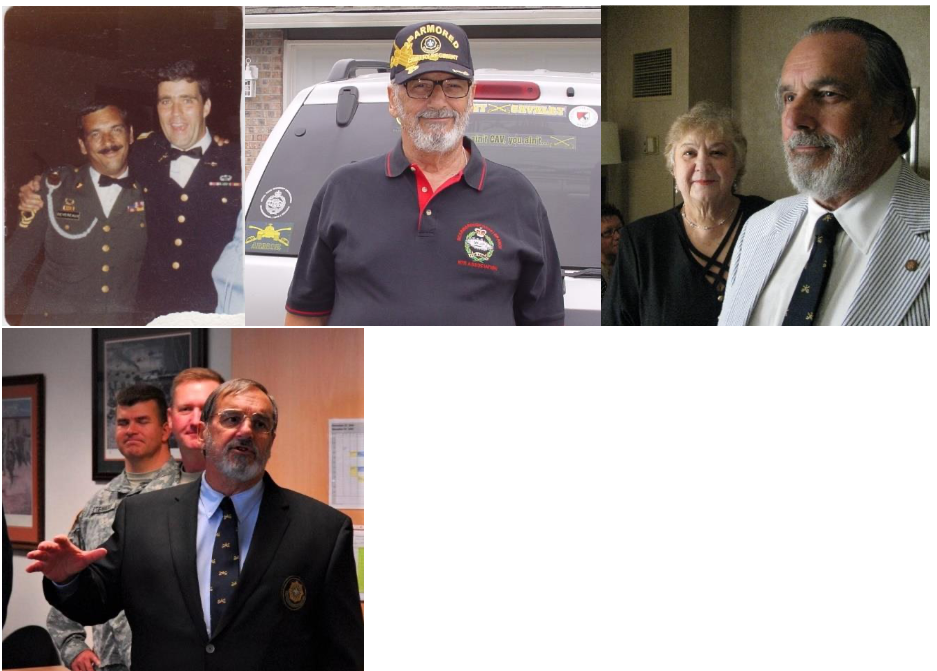 Gregory Jay Noble. March 19, 1966 – March 30, 2021. Greg Noble died at Salem Health Hospital of a MRSA infection in his lungs. He was born in Salem, Oregon to Robert and Nancy (Linscheid) Noble, and he leaves behind his partner in love, Sarah Frey, and his parents.

Greg graduated from Douglas McKay High in 1984 and enlisted in the U.S. Army shortly thereafter. He served with the Blackhorse Regiment, 11th Armored Cavalry. He was stationed in Fulda, Germany for two years maintaining Abrams M1 Tanks.

Later, he served in France during Operation Desert Storm. He worked in several different industries in Salem and around the Valley.

In addition to Sarah, Greg loved his many friends in Salem. He also loved all automobiles, water sports, heavy metal, birding, photography, and his best bud, his Yorkie “Cooter.” He perfected the art of smoking meats in his Traeger BBQ and loved to tantalize his neighbors while doing so. He took many, many wonderful photos of birds at their feeders – his specialty was photographing hummingbirds.

No funeral is planned; however, family and friends are invited to a celebration of Greg’s life at the Hong Kong Restaurant and Lounge at 3583 Commercial St. SE in Salem on April 17 from 11:00 a.m. to 2:00 p.m. 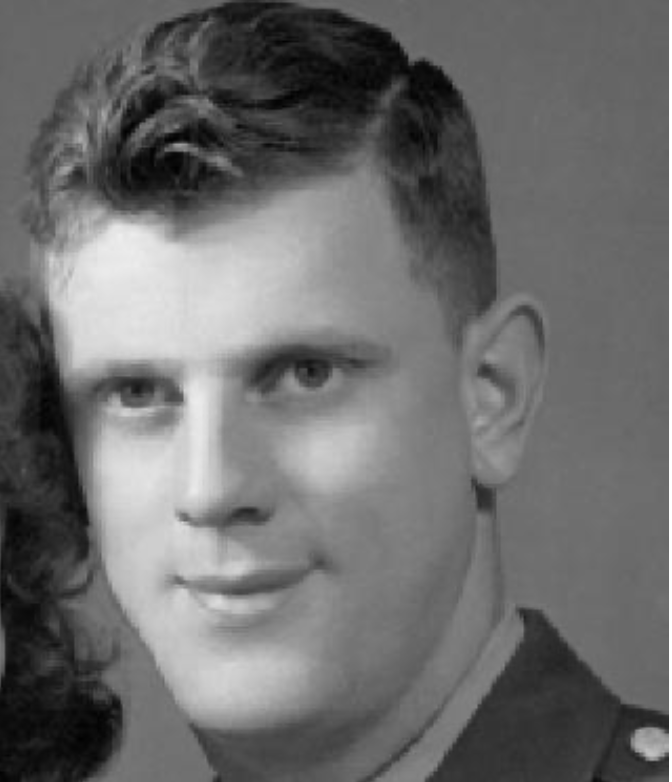 CSM Cooper was born and raised in western Pennsylvania, where he enlisted in the Army, retiring from over 30 years of service (he was both a Korean and Vietnam War Veteran).

Leonard enjoyed skiing and automobiles, was a great community member, and was always helping his neighbors and friends. He will be greatly cherished by all.

CSM Cooper was a longtime member of the Blackhorse Association and a frequent attendee of our Blackhorse Family Reunions.

Major General (Ret.) Robert Sunnell was laid to rest at Arlington Cemetery on March 29, 2021. Below is the program’s cover along with photos from the ceremony; these were provided by Glenn Snodgrass. The Regiment was well represented by its members, many of whom travelled long distances to attend the ceremony. 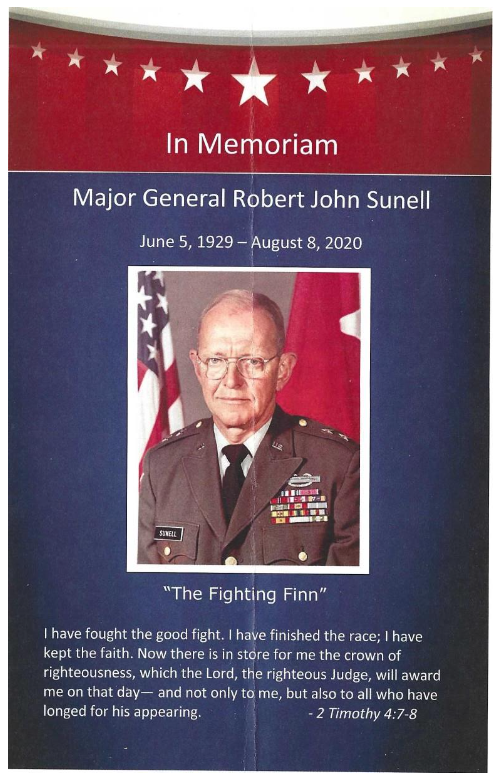 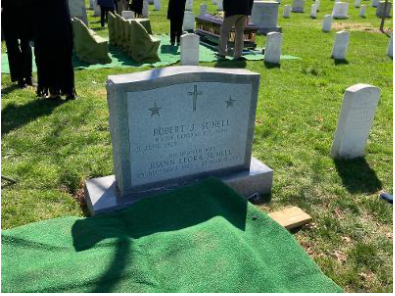 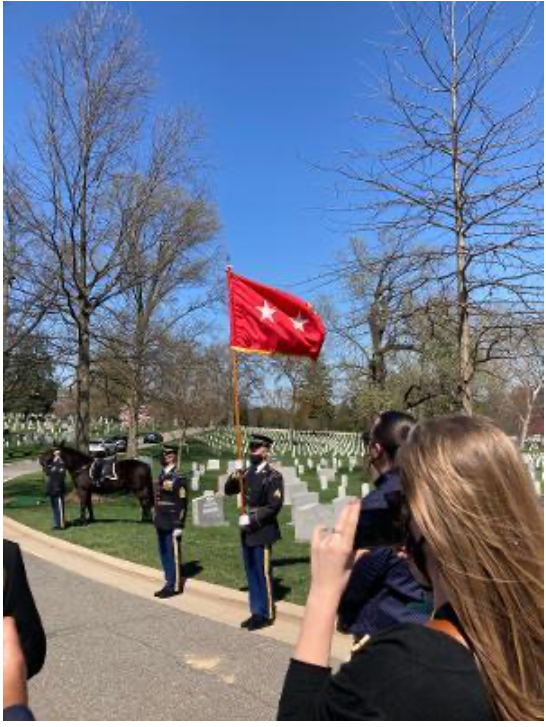 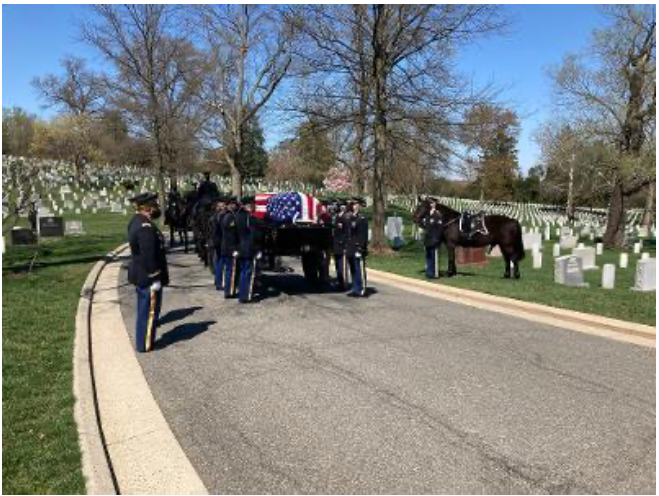 The Blackhorse Association has received notice of two new named scholarships that will bolster our scholarship fund.

Tahoe Reno Industrial Center/Don Roger Norman/Kris Thompson Scholarship. This new scholarship was funded in the amount of $3,500 for the 2021 round of awards. Kris Thompson, a former Commander of C Troop, 1/11, organized the award and won his employer’s support for its funding. The association is most grateful to Kris Thompson and Don Roger Norman of Norman Properties for their support.

BG John Sherman Crow. An anonymous donor informed the Association of arrangements to fund a named scholarship in honor of BG John Sherman Crow, the 49th Colonel of the Regiment. The donor further stated that the scholarship will be multi- year in nature in honor of General Crow’s contributions to the 11th ACR and The Blackhorse Association. The members of the Board and the Scholarship Committee are grateful for the donor’s generosity and professionalism.

Donations to either our operating or scholarship fund can be made online at the Blackhorse Association’s website; credit card, PayPal, or check can be used. If desired, your donation can be restricted to specific named scholarships by clicking on the tab to select the named scholarship.

Thank you for your contributions in support of the children of the Regiment.

The Blackhorse Regiment is offering a “box ride-along” opportunity to veterans of the Regiment during rotational maneuvers!

Blackhorse Association members will get the opportunity to travel into the box and witness the Regiment engage in a fight with the enemy. Afterwards, veterans will visit their old units, meet & greet the available command/unit members, and get a personalized tour of the Regiment’s “footprint” on Ft. Irwin.

The Regiment is offering this on June 10, 2021, with the intention of continuing to offer these events throughout the year during training rotations!

Here is a sample itinerary of your day on Ft. Irwin:

The only cost to the veteran is transportation (see below) and lodging at the Landmark Inn on Ft. Irwin during their visit.

The veteran would be responsible for travel to either Ft. Irwin or the Las Vegas, NV airport. If you book a flight to/from Las Vegas, the Regiment will procure transportation to and from Ft. Irwin for you at no cost.

Please be advised that Ft. Irwin currently has some restrictions in place for visitors. It is expected that these will be slowly lifted by June, but if they aren’t, the Regiment could sponsor you on post.

There will be a requirement to submit required documentation for the visit.

If you decide to take advantage of this offer, contact the Blackhorse Association Liaison with the Regiment, Aaron Nelson, who will coordinate your visit with the Regiment. He can be contacted at tnanelson@nullmsn.comcreate new email.

Update to the BHA Membership: The Reunion is a Go!

The BHA board recently met, and it confirmed that the Reunion will occur as scheduled. We hope to see you there!

Why: The Association’s 50th Anniversary

Who: All past and present troopers who served with the Regiment, including anyone who served in the Regimental Community or any of the separate units that supported the Regiment; families; and friends of the association.

How: Blackhorse Association 2021 Reunion hotel reservations. After you enter your reservation dates, “BLA” will show up in the Group Code block.

Reservations must be made by May 5, 2021. Feel free to take a closer look at our location at www.hiriverwalk.com. Please use the above link to make reservations or contact 1-800-Holiday. Our coordinator is Victoria Brock at 210-272-1514.

The registration fee is $150 for both days. The registration fee covers the buffet at the Friday evening “Stable Your Mount” social, the Saturday buffet, and other reunion costs (ARF fees, AV equipment, and Store support). There is no late registration fee. Additional fees for those tours provided by AFR will be charged separately. Attendee transportation (including airfare, rental car, parking) and lodging must be organized separately.

For more information, please contact Scott Harrison at 813-944-8808 or sharrson@nullgmail.com.

Enjoy a scenic ride to Fredericksburg to tour the National Museum of the Pacific War which is dedicated to everyone who served in the Pacific under Admiral Nimitz. The Museum includes over 34,000 square feet of indoor exhibit space including the George Bush Gallery, Admiral Nimitz Museum, Plaza of Presidents, Veterans’ Walk of Honor, Japanese Garden of Peace, Pacific Combat Zone, and the Nimitz Education and Research Center. A 43,000 square foot expansion was added in 2010, where you can explore the impressive display of Allied and Japanese aircraft, tanks, guns and other artifacts made famous during the Pacific War campaigns. Enjoy lunch at one of several restaurants or delis located on Fredericksburg’s downtown Main Street. There is shopping nearby on Main Street for those interested.

From the earliest Spanish Missionaries in 1691 to today’s traveler, San Antonio’s appeal continues to draw attention. Relax and enjoy a fully narrated tour of San Antonio’s unique blend of rich heritage, traditions and natural beauty. Points of interest include stops at the San Jose Mission which is still an active church and is part of the National Park service, the largest of the missions; San Fernando Cathedral, the original church of the Canary Island settlers; From there you’ll enjoy some time at the San Antonio River Walk or River Center Mall. Enjoy lunch on your own, possibly at Casa Rio, the first Mexican Restaurant on the RiverWalk. Its beautiful location and colorful umbrellas have come to symbolize the serenity and romance of the San Antonio RiverWalk.

12:00 am board bus, 5:00 pm back at hotel $37/Person includes bus, guide, and admission to the Institute of Texas Culture. Lunch on your own.