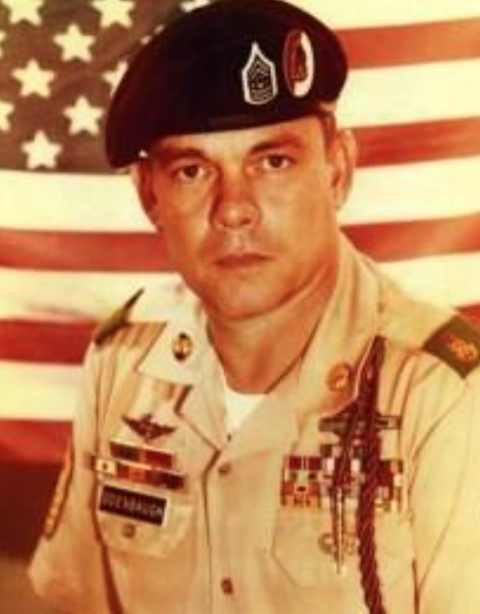 CSM (ret.) Lawrence Odenbaugh. Sergeant Major Odenbaugh received his final assignment on Saturday, June 18, 2016 with his family by his side. Larry passed away from cancer as a result of exposure to agent orange in Vietnam.
He was born January 1, 1934 in Tulare, CA to the late Lawrence Conrad and Edith Beaty Odenbaugh.
Larry joined the Army at the age of 17, and he served 30 years in Korea, Germany, the United States; he served three tours in Vietnam. He was a Special Forces soldier, and from 1973 to 1977 he was the Command Sergeant Major of the 3rd Squadron, 11th ACR in Bad Hersfeld, Germany. CSM Odenbaugh received 5 medals for valor and heroism.
Along with his parents, Larry was predeceased by his stepfather Larry Hollinger; son, Steven Lawrence Odenbaugh; former wife, Nancy Gail Odenbaugh; and son-in- law Randy Clark.
A Celebration of Life was held on June 23 at the Reeves Funeral Home Chapel and was conducted by Gerald Patterson. Interment will be at a later date at Arlington National Cemetery with full military honors.
Among those mourning his loss are daughters Anna Denise Clark, Sandra Lee Toole, and Tina Marie Fagan and husband Matthew; brother David Hollinger; special friend Karen Gore; daughter-in-law Paulette Odenbaugh; and six grandchildren and nine great-grandchildren.
Lawrence K. Fennell. Lawrence passed away on July 23, 2016. He served in the 11th ACR from 1968 to 1970 as an M-113 ACAV driver. He was a member the Purple Heart club and Disabled American Veterans. Originally from Lorain, Ohio, he was residing in Foley, Alabama at the time of his death. His memorial service was at Robertdale United Methodist Church on August 3, followed by burial in Veterans Memorial Cemetery at Spanish Fort, Alabama. He is survived by his loving wife of 44 years, and he was preceded into the Lord’s hand by his mother and father Lawrence Fennell, Senior.
Correction
In the July E-News, we reported that the 11th ACR RSS had participated in a memorial ceremony and that the honor guard had fired a 21-Gun salute. The following information was provided by member Rey Frutos:
"For your information: I too participate in a Rifle Squad with VFW and render honor to our Fallen Comrades at funerals. In this situation, the 21-Gun Salute is not a 21-Gun Salute–it is actually a Three-Volley Salute. The 21-Gun Salute is done in honor of high-ranking officials and is done with cannons."
Thanks to Rey for his sharp eye and taking the time to inform us.
Some Interesting History of the Blackhorse

This comes from Robert Branson, a platoon leader in H Troop and B Troop in Germany in the 1960s.

"As far as ‘Blackhorse,’ Colonel Boyer brought the motto with a passion! I’ve attached a section from my tribute, but it went much deeper than even that. Although we actually feared the old man’s wrath, we pulled up our bootstraps and became the fulfillment of HIS vision. Many of those habits were so deeply instilled that they follow me today. When someone asks me why I always have a pen and pencil in my shirt pocket, they get a brief summary of what Blackhorse means and who COL Boyer was. The symbol did not appear until the regiment went back stateside. ‘Allons’ was the prevalent symbol–black on a traditional yellow background. We wore the ‘Seven Steps to Hell’ on our sleeves, and "Allons" on our scarfs. Here is an old picture of a young lieutenant in khakis. The note on the back reads, ‘Your Blackhorse Cavalryman’ in my hand writing." 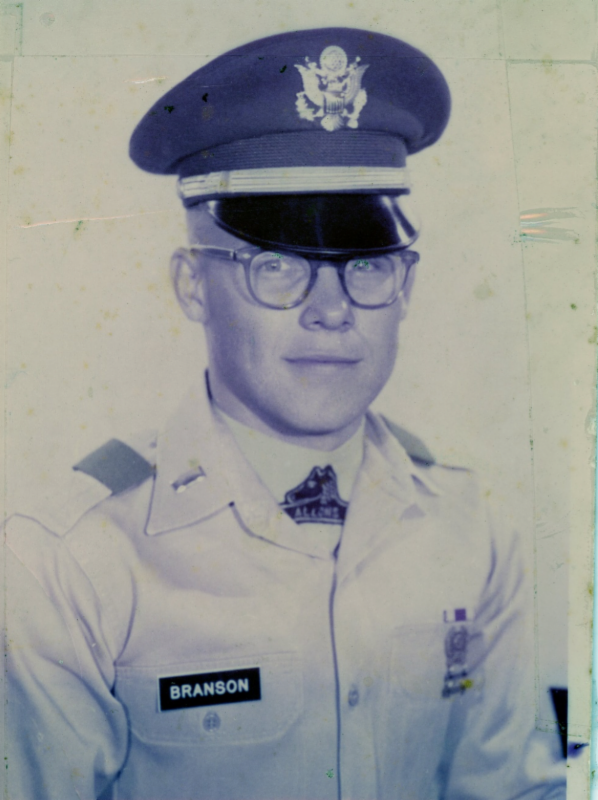 Our Historian, Don Snedeker provided this background information on Colonel Boyer:
Col. Donald P. Boyer was the 33rd Colonel of the Blackhorse Regiment. He was in command in Germany and continued when the Regiment rotated to Ft. Meade, MD in 1964. He changed command with Col. William Cobb in late 1965.
Col. Boyer was a hero of the defense of St. Vith, Belgium during the Battle of the Bulge in 1944. He was captured during that battle and spent the rest of WWII as a Nazi POW.
A Long Overdue Award to a Blackhorse Trooper
Several months ago, Fred Rivera, a Blackhorse Association member, contacted us asking for any information on an action with C Troop in 1969; Don Snedeker was included in the e-mail. Fred was good friends with Herman Johnson, also of C Troop. In this firefight Herman was wounded. Fred came to his aid and apparently in the "fog of war" and confusion, Fred thought Herman died that day. The link below tells the story.

For 47 years, Fred has thought that Herman had died. Fred Rivera and Herman Johnson met for the first time in 47 years on Sunday, July 10, at the Vietnam Veterans Memorial. It was a good day for these two soldiers and all who know their story. Thanks to Lieutenant General (ret.) Guy Swan for his help in getting the Purple Heart approved and for presenting the medal to Herman after 47 years. Herman was completely surprised.
Below are three photos related to the event. 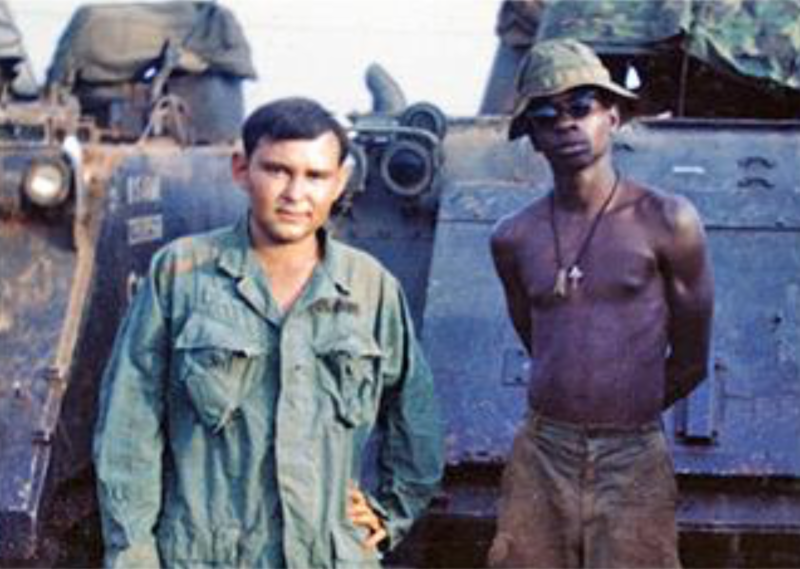 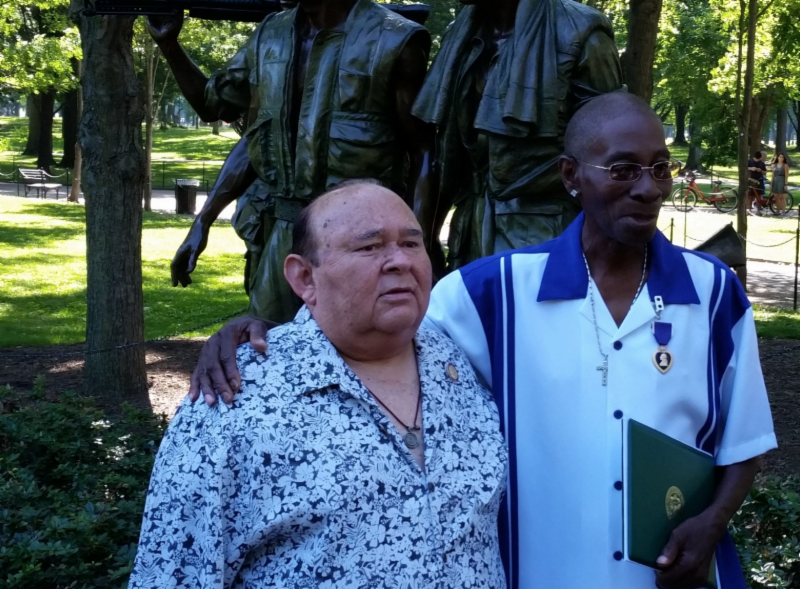 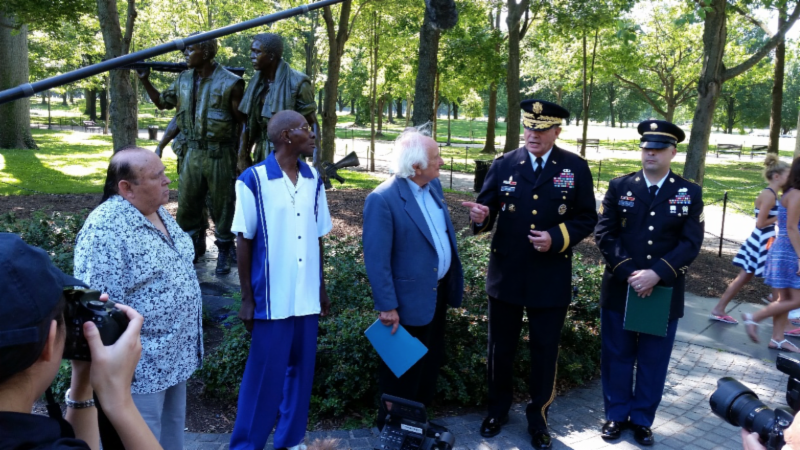 Fred Rivera (far left), Herman Johnson (second from left), and LTG (ret.) Guy Swan (2nd from right) at Herman Johnson’s Purple Heart Ceremony at the Vietnam Veterans Memorial
More photos are at the 11th
ACVVC Facebook page along with the newspaper article.
2017 Blackhorse Association Family Reunion
It’s not too early to start planning for attendance at next year’s Reunion in Atlanta. Below is the current information for the 2017 Reunion. Although we do not have all of the information on registration costs and activities, we are making the hotel information available to the Association’s members. Our hotel has blocked off rooms June 4-13, 2017 to help accommodate family vacations as well as early and late departures. The rate is "locked in" for this time period.
Draft schedule of events:
* June 4-7, 2017: Early arrival
* June 7 (Wednesday): Set-up of registration and hospitality
* June 8-10: Blackhorse Association Family Reunion
* June 8 (Thursday): Registration, Silent Auction and Hospitality are open
* June 9 (Friday): AM: Bike rally and 3rd Annual Ernie Ford Memorial Golf Tournament;
PM: Friday Social
* June 10 (Saturday): AM: Bus tour to Ft Benning and 11th ACR Memorial;
PM: Saturday Formal
* June 11 (Sunday): Departures * June 12-13: Late departures
Reservation deadline (to get the early-bird rates): May 15,2017
Group Information
Group Name: 11th ACR Blackhorse Association Group Code: ACRC
Check-in: June 4, 2017
Check-out: June 13, 2017
Hotel Name: Hilton Atlanta/Marietta Hotel & Conference Center Hotel Address: 500 Powder Springs Street; Marietta, Georgia 30064 Phone Number: 770-427-2500
Hotel Website: http://www3.hilton.com/en/hotels/georgia/hilton-atlanta-marietta-hotel- and-conference-center-ATLMAHF/index.html
Fourth of July Parade!
An annual tradition here in the area of Myrtle Beach, South Carolina is the Golf Cart Parade on July 4. This year, there was a record 400 golf carts participating that were decorated with an Independence Day Theme. The top decorated carts were awarded prizes and our Blackhorse cart received Honorable Mention. While all the other carts’ decorations came off after the parade, ours is permanent. The Judge noted that, and he made a point of letting everyone know it. I thought our Troopers might get a kick out of it.
Allons
Mike Kathman
L Troop 66-67 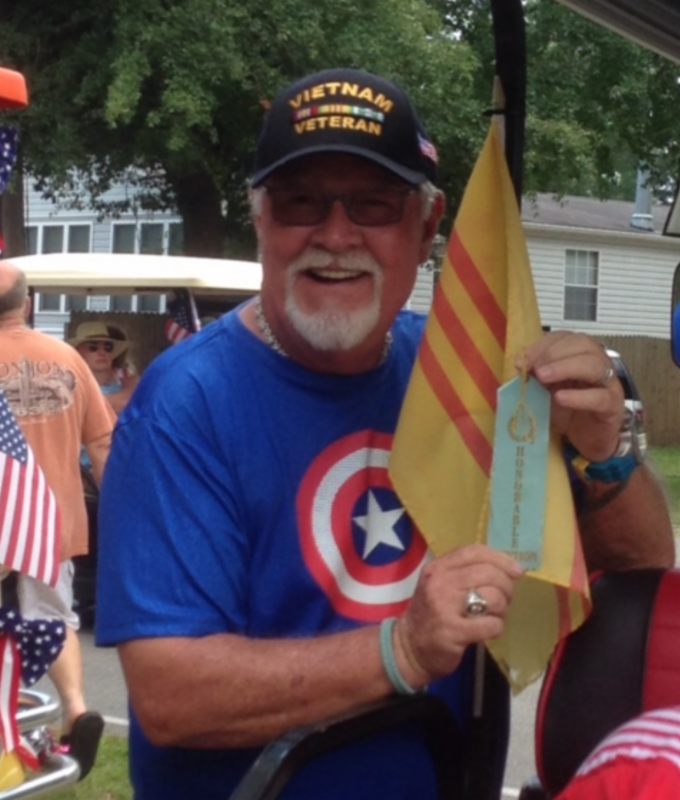 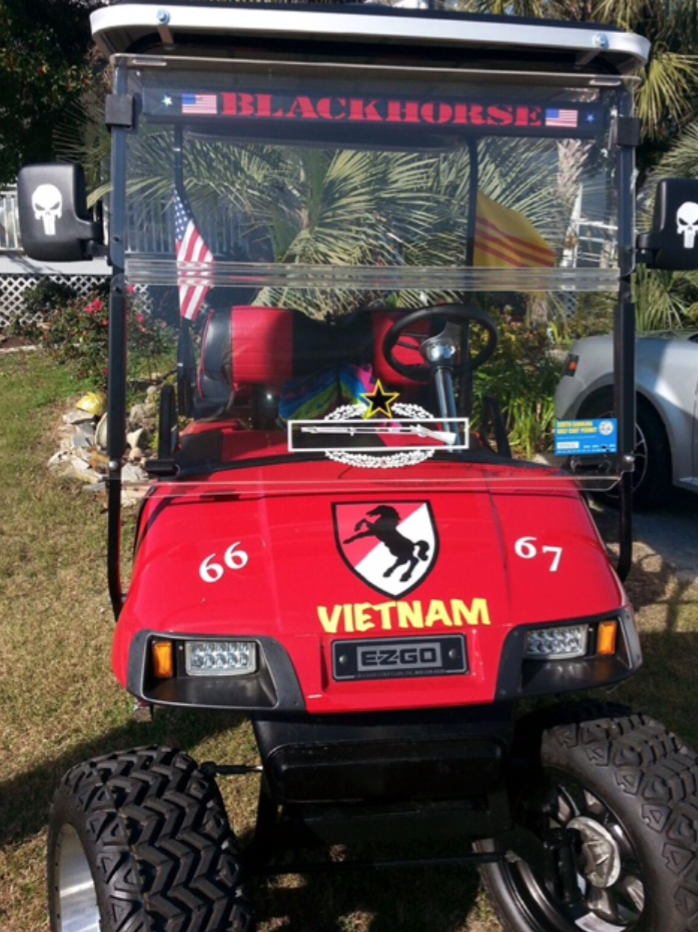