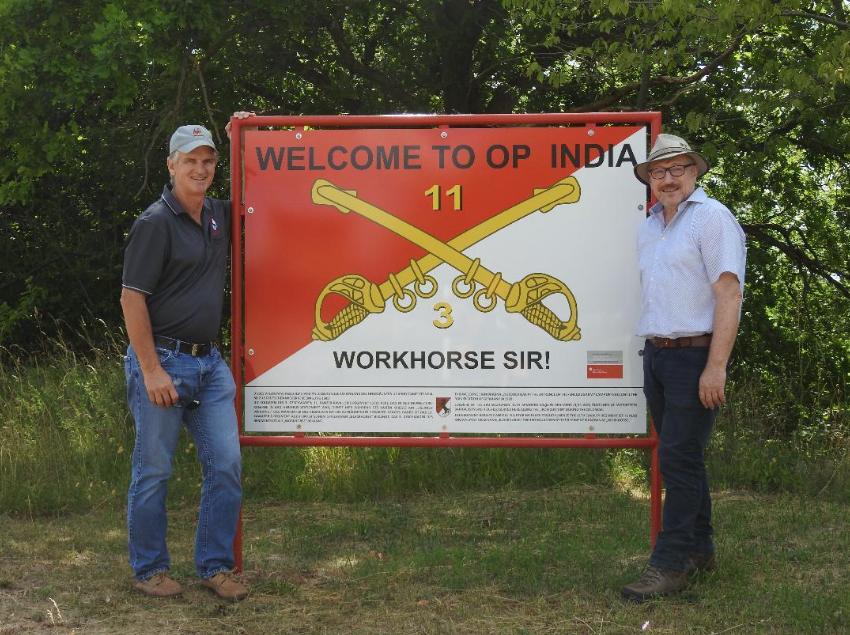 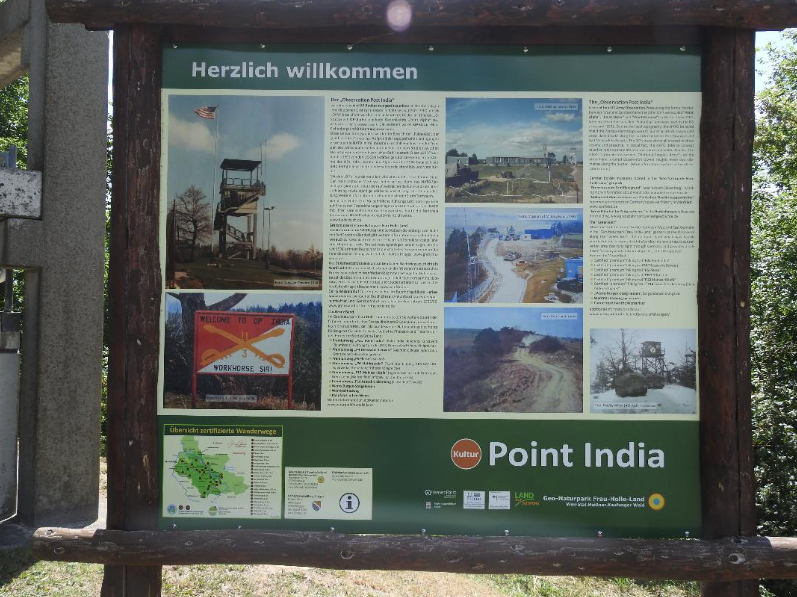 At the board meeting during the recent Blackhorse Family Reunion, I volunteered to engage with the German leadership of both OP/Point Alpha and OP/Point India to develop points of contact for us to engage with. The Blackhorse Association
was interested in being a formal partner to the Point Alpha Foundation. I am personally interested in the OPs because I did several rotations at Alpha as a platoon leader and as Acting Commander of B Troop (during a major exercise in 1981 when the rest of the Regiment was maneuvering). I had a platoon at Alpha, India, and Romeo.

I traveled to both OP India/Luederbach and OP Alpha recently. I had a terrific several hours with Reiner Methe at Point India and in Luederbach.

Reiner is the driving force behind promoting Point India in his volunteer role as leader of the Luederbach Voerderverein, an umbrella club/non-profit that promotes the town of Luederbach and its activities. He is mid-60s, a life-long resident of Luederbach, a town of 150 people just down the hill (~1500m) from the former OP. His wife had
been working in the dining facility at OP India for about four years when it closed in 1990; his mother-in-law retired out of working in the kitchen at the OP. As a young man, he was BGS (Bundesgrenzschutz or Federal Border Police), one of the agencies we worked with closely in the Border Legion days.

The following is the post-reunification story of Point India. Reiner and his organization engaged with the State of Hessen in 2014 to gain control of the tower, the only building remaining as the barracks and other buildings had been badly vandalized and were torn down in 2000. His group now owns the tower and pays a Euro 10 annual lease on the land, which sits on Hessenfoerst (Hessen state forest service). Reiner and team restored the tower (also badly vandalized) with support from the Sparkasse (savings bank) Foundation, private donations, and a lot of volunteer labor, opening it in September 2017. Much of the well-built signage Reiner showed me was funded by the Sparkasse Foundation; the Workhorse sign in the picture sign below was a fairly recent addition paid by the Sparkasse. The layout of the signage is Reiner’s design, as well as the German text. A former Army employee in Fulda did the English translation which is pretty good, and everything is in English and German. Reiner told me he cuts the grass around the tower because they are on a shoestring budget.

Reiner’s group has built several hiking trails around Luederbach including P21 that works its way back and forth across the former border into the state of Thuringen, integrating pieces of the former border fence and other East German historical items along with Point India. That rural area of east Hessen is a hiker’s mecca. While stopped at the hikers’ parking lot and waiting to link up with Reiner, we saw two carloads of 30-somethings from Kassel head off on the 14 km P21 Point India trail.

Reiner has a thick album of pictures sent to him at the P21 Point India Facebook page by former Blackhorse troopers. Many of those pictures are in the signage at Point India. They are currently funded by small donations and selling bratwurst and beer to hiking groups. The next upgrade on his list is a flagpole on the tower with a US flag.

The lines of sight from the tower to the former Inter-German Border are almost completely blocked by trees that have grown up in the 30 years since our last border patrol (Reiner attends the Last Patrol Ceremony at Point Alpha each spring). You can still see into Thuringen – though not the border trace – from the top deck of the tower, but you can hardly see anything from the watch room one flight of stairs lower. Most of the land around the OP has been declared a nature preserve and Hessen foerst has denied him permission to trim or remove trees to establish a couple of key viewing angles (even the mounting of the Workhorse sign was a bureaucratic drill for Reiner).

According to Reiner the only things at the former OP Romeo about 30 kilometers away are the plaque below and a sign. The OP Romeo group is apparently jealous of the OP India tower, and nobody is quite sure why one was torn down and not the other. 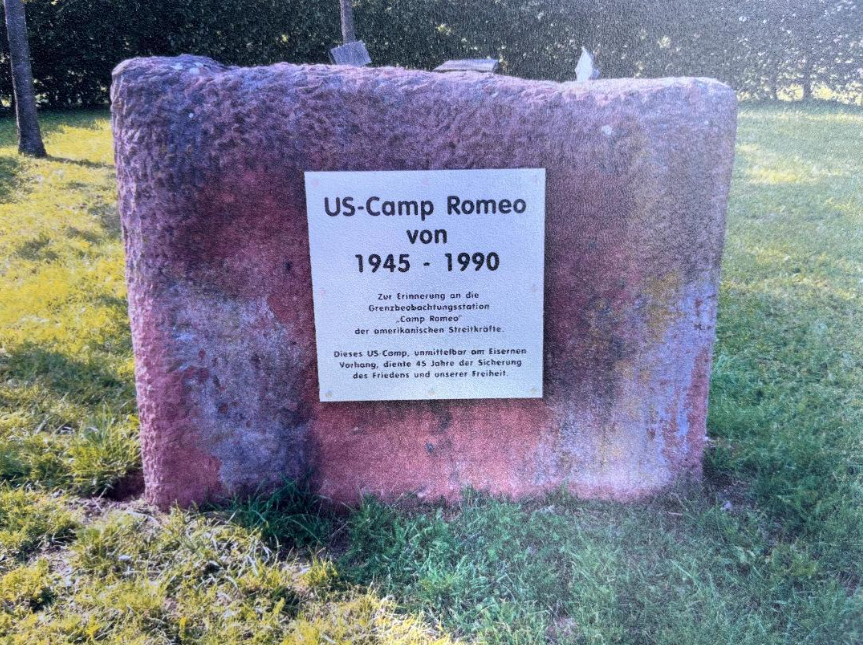 There is one further note on the relevance of these sites. I was sitting at Point India flipping through Reiner’s Facebook picture collection when a former colleague from the 80s in 3rd AD (Friedberg) walked by me to the tower. This is a guy I hadn’t seen since 1989. His tank company had manned OPs India and Romeo in 1988 while Workhorse went to Grafenwoehr for gunnery. Then at Point Alpha I ran into three Army veterans groups. The point is that people visit and value these places. 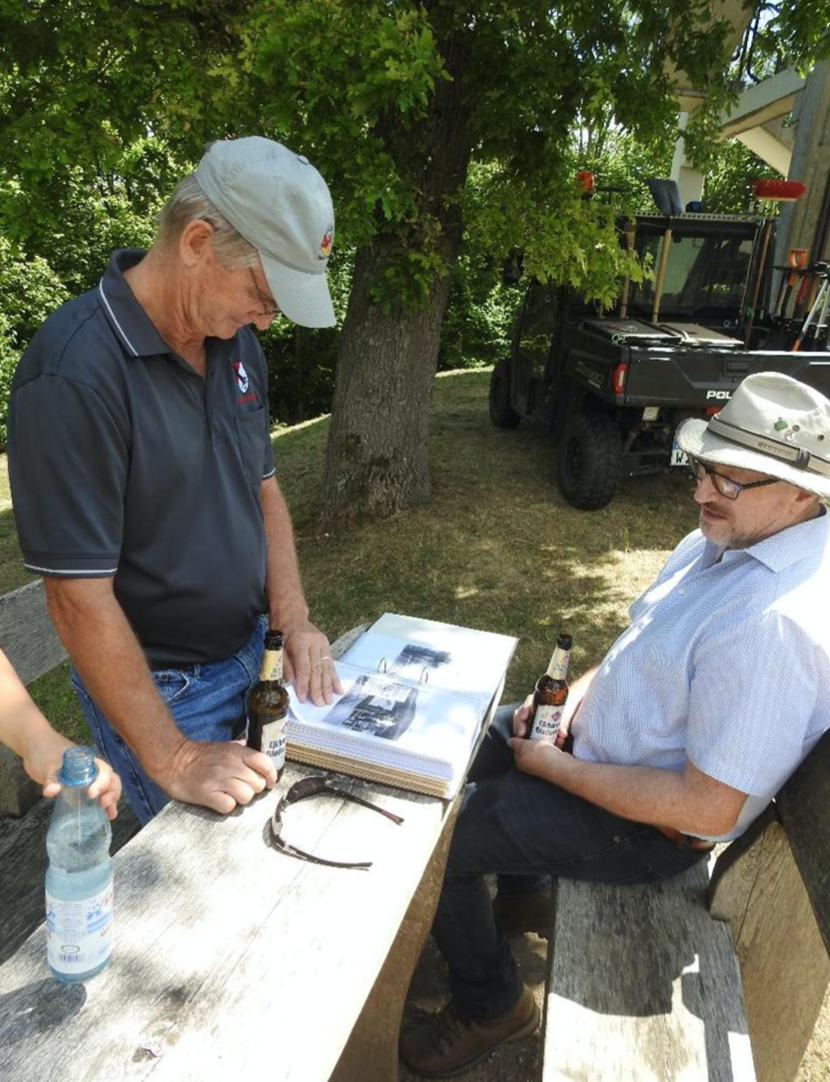 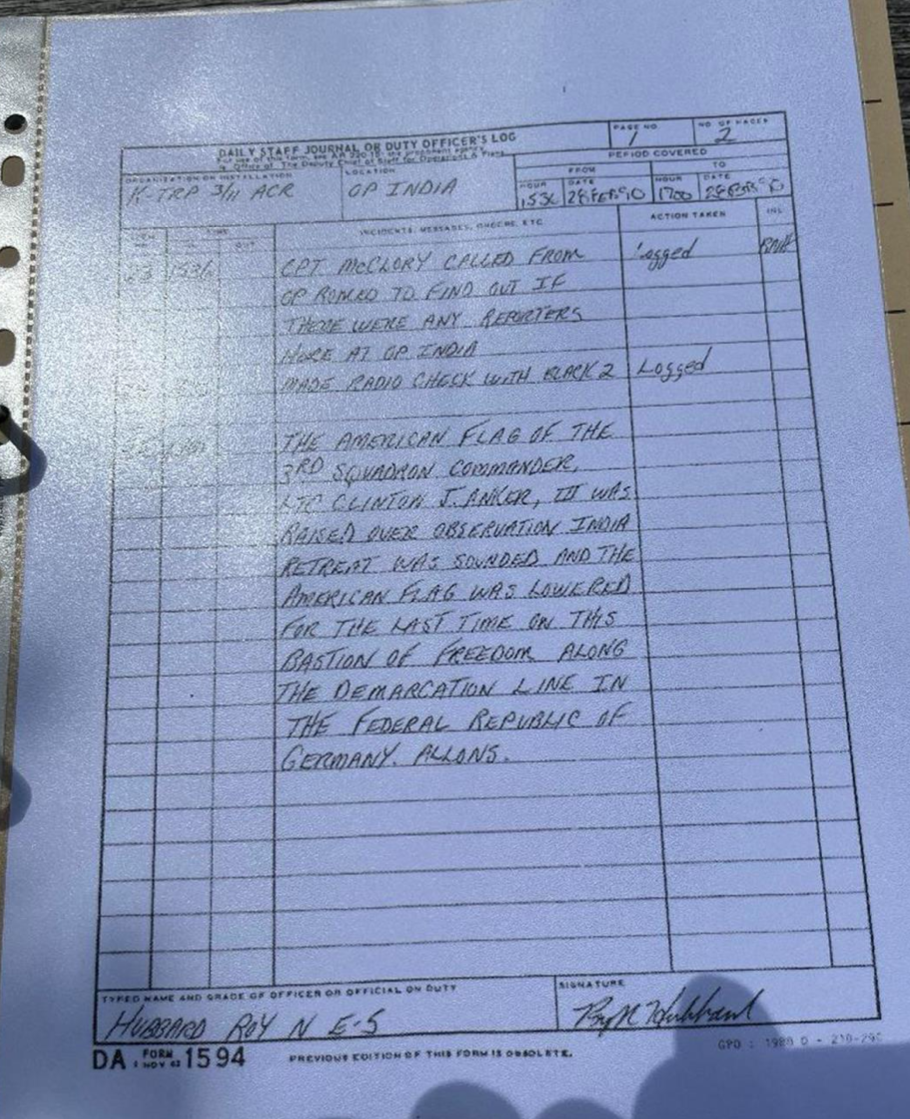