Walter R. “Sonny” Frick, Sr., 69, died on November 7, 2015 in Enumclaw Washington. A longtime resident of Buckley, he was born in Guthrie, Oklahoma, on July 26, 1946. He was drafted into the U.S. Army in 1966 and proudly fought for his country as a member of the 11th Armored Cavalry Regiment (“Blackhorse”) in the Vietnam War. Upon returning home, he had a long and dedicated career in the logging industry, and he retired as a heavy equipment operator from Edman Company of Tacoma, Washington. Sonny was a devoted family man, a friend, a hero, and a loved man. We will never forget his laughter, funny stories, and his kind sparkling eyes. Walter is preceded in death by his infant son, Robert Scott Frick; father, George Walter Frick; and son, Walter Ray Frick, Jr. He is survived by his wife, Colleen Frick; mother, Opal Frick; son, Matthew Frick and his wife, Jennifer; daughters, Stefani Frick and Sami Frick (Steve); sisters, Karolyn Flork and husband Bob, Joyce Bowen, and Phyllis Frick, all of Buckley, and Katherine Cornelius and her husband, John of Yuma, Arizona. He is also survived by his brother-in-law, Tom Brewer, of The Dalles, Oregon; 9 grandchildren, 10 nephews, and 10 nieces; and numerous great nephews & nieces. A military burial was held on November 23, 2015 at the Buckley Cemetery. Memorials may be made to Buckley Log Show, PO Box 944, Buckley, Washington 98321.

William Clyde Mize of Macon, Mississippi, passed away at his residence on Wednesday, November 11, 2015. A graveside service with military honors was held at Salem Cemetery in Macon, on Monday, November 16. Clyde was born in Macon to the late Charles Ross and Maudie Cordelia Wood Mize, and he attended school in Macon. He joined the U.S. Army and served during the Vietnam War with the Blackhorse and was awarded the Bronze Star, the National Defense Service Medal, the Vietnam Service Medal, and the Vietnam Campaign Medal. After his military service, he returned to Macon where he was employed as a mechanic. Most recently he was self-employed as a used car dealer. Mr. Mize attended West Side Baptist Church in Macon. Mr. Mize’s survivors include his wife, Kay Mize of Macon; and three daughters: Michele Summers of Denham Springs, LA, Heather Charlton of Louisville, MS, and Ashley Richardson of Columbus, MS. He is also survived by two sisters: Joann Bartlett of Toomsuba, MS and Laura Clark of Columbus, MS; one brother, Charles A. Mize of Mammoth Cave, KY; and by six grandchildren.

The following note was received from Volker Bausch, Director of the Point Alpha Foundation, after receiving the Blackhorse Association’s donation of $5000 towards the Foundation’s upkeep, and regarding the status of the memorial/museum at the former OP Alpha.

The funds have arrived – thanks a lot again! We will publish your donation on our homepage, our Facebook page, and on your homepage if you want. Today I received an official letter by the Federal Government that they will support the planned exhibition project “Everyday Life” in the former Camp. Great news for us – it means that we can start the project; nevertheless, we’ll be looking for further support to maintain the character of the German-American effort.

On Thursday, I’ll be having a phone conference with Gen. Sullivan on the mobile exhibition I mentioned. He saw it in the Mission Command Center in Wiesbaden and was so impressed by it that he plans to bring it to D.C. (and later to other locations). We have inaugurated a very nice Point Alpha exhibition in the Mission Control Center in Wiesbaden. Below are some recent photos of the Point Alpha exhibits. 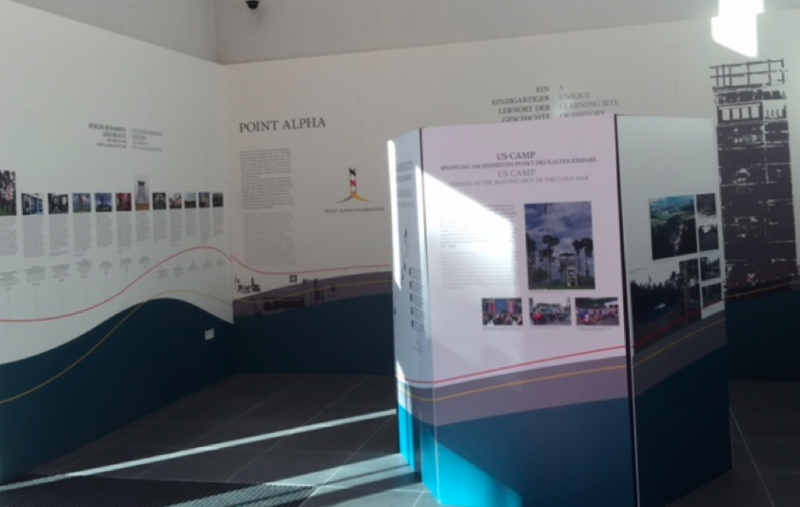 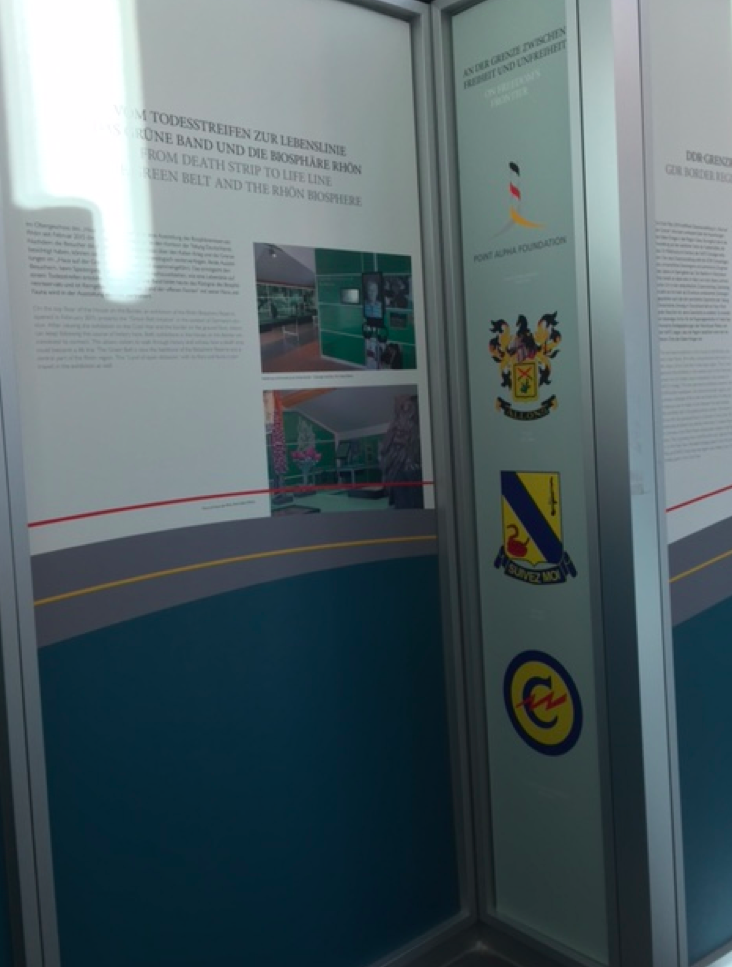 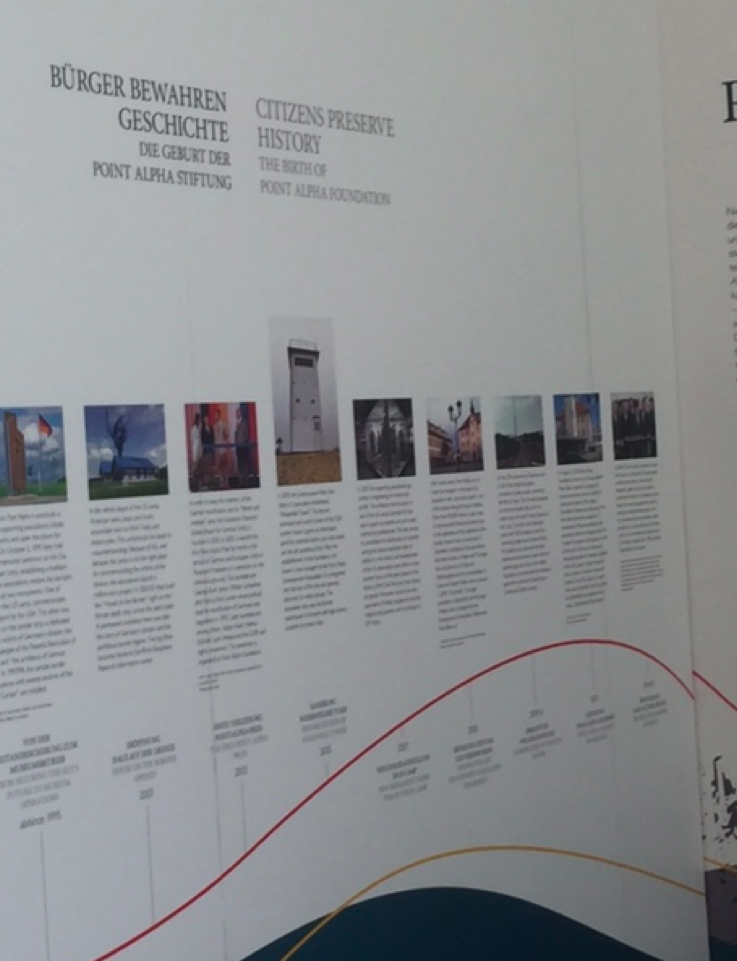 Our sister cavalry regiment, the 14th ACR, has a lot of information and photos on the internet from its border days. While this time frame precedes the Blackhorse’s last tour on the Frontiers of Freedom, there is a lot of good information on kasernes and the border itself that will bring back memories to those members of the Border Legion. Definitely worth a look.

This is just a reminder about our annual 1901 Club Fundraising. Details were sent out in recent E-News and in our annual fundraising letter, but we want to reiterate the importance of this event for our Association’s success.
If you would like to contribute by credit card, please provide the following information:
Mail this information to:

If you prefer to pay by PayPal, please go to our web site, www.blackhorse.orgopens in a new window, select “Donate”, and select “Click here to donate to the 1901 Club” red bar. Please complete the information.
_______________________________________________
A Soldier Remembers a Moment from the Cold War
The following note and photo were sent to us by former B Troop Soldier Anthony Wade.
I am one who thinks things or events happen for a reason, and a childhood friend sent me this photo last night after we had spent the last day or so reminiscing of our days in B Troop, 1/11 ACR. I had no idea she was sending it to me.

This photo was taken in April 1978 in Communist East Berlin when the Berlin Wall still divided the city. Don, you afforded me the opportunity to go on the Berlin Orientation Tour; I am forever grateful for that.

As an 18-year-old with a general sense of The Cold War, this photo is one of the most poignant moments in my life. While I was excited to take the picture with the youth of East Berlin, a moment of sadness occurred at the same time with the realization that they were living under a totalitarian regime, which limited their ability to live the ideas and values of a democratic society. Luckily, the Berlin Wall came down 11 years later in 1989 and there’s a good chance that some of the youth in the photo were finally able to experience the freedoms that we and others around the world take for granted. 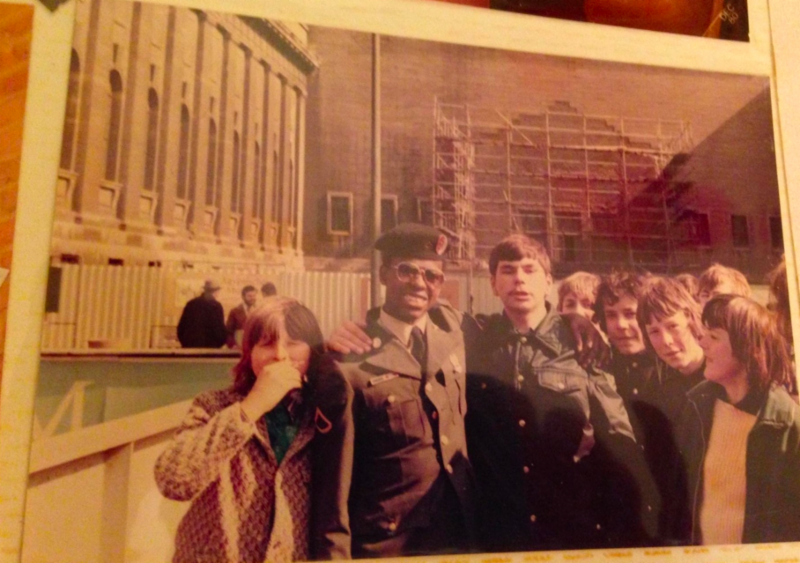 http://www.armymagazine.org/2015/11/12/ntc-the-armys-training-oasis-in-the-mojave/opens in a new window

At precisely 11:11 a.m. each Veterans Day (Nov. 11), the sun’s rays pass through the ellipses of the five Armed Services pillars to form a perfect solar spotlight over a mosaic of The Great Seal of the United States. The Anthem Veterans Memorial, located in Anthem, Arizona, is a monument dedicated to honoring the service and sacrifice of the United States Armed Forces. The pillars provide a place of honor and reflection for veterans, their family and friends, and those who want to show their respects to those servicemen and women who have served and continue to courageously serve the United States.

Additionally, the brick pavers within the Circle of Honor are inscribed with the names of over 750 U.S. servicemen and women, symbolizing the “support” for the Armed Forces. The pavers are red, the pillars are white, and the sky is blue to represent America’s flag. The circle represents an unbreakable border. Anthem resident and chief engineer Jim Martin was responsible for aligning the memorial accurately with the sun.

For more details:
http://www.onlineatanthem.com/anthem-veterans-memorialopens in a new window 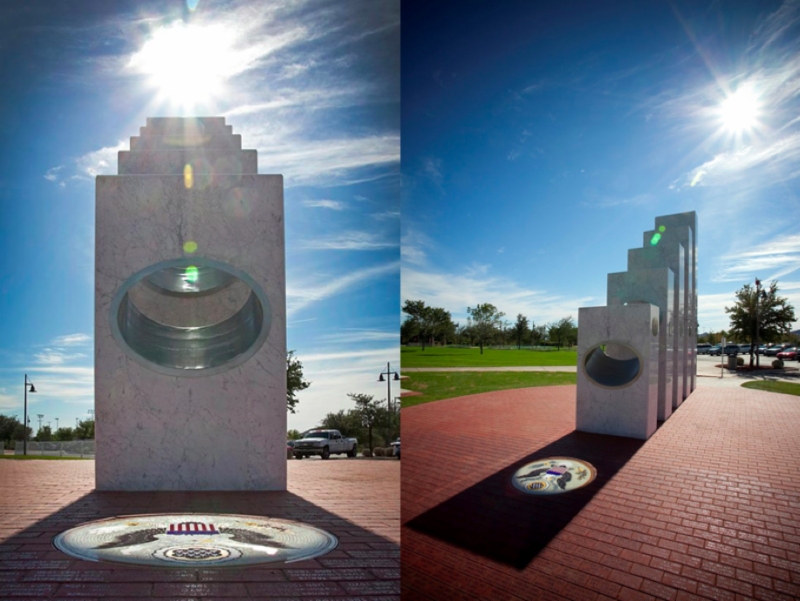 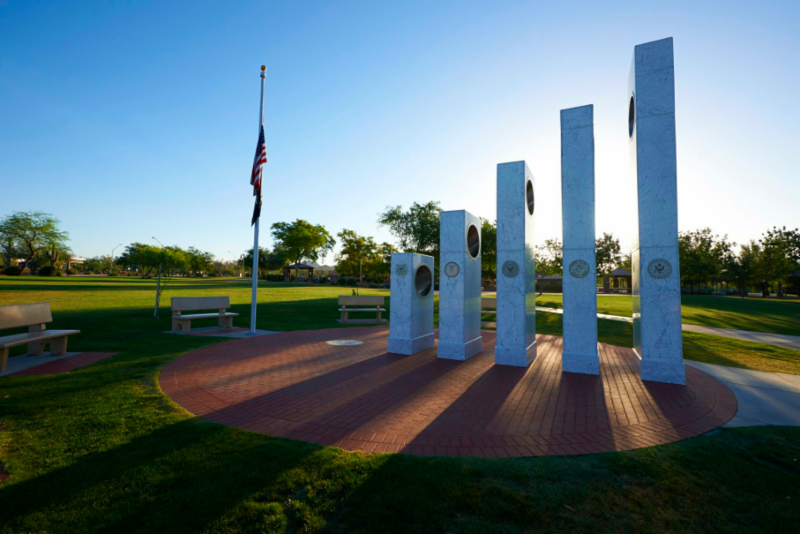