Skip to content
Blackhorse Scholarships
One of the original purposes of the Blackhorse Association was to take care of the children of members of the Regiment. This originated in a promise made by then- Colonel George Patton, Regimental Commander, to a dying trooper. Once again this year, we are able to do this thanks to the generosity of our members. Thanks to all who contributed, to Bob Hatcher who runs the program, and to the members of the scholarship team who review the applications and select the winners! Below is Bob’s report on this year’s winners.
The Blackhorse Association continues to grow in the support of named scholarships, which provide $3000 annually to “take care of our kids,” as stated in the founding purpose of the Association. We are excited about the growth and potential of this program and encourage others who might want to designate an annual scholarship to contact our Scholarship Director. See our Blackhorse Association website for details at www.blackhorse.org. Named Scholarship Recipients for 2018:
Other Scholarship Recipients for 2018:
Blackhorse Trooper Honored for Service to His Community A Blackhorse Congratulations on a Job Well Done! 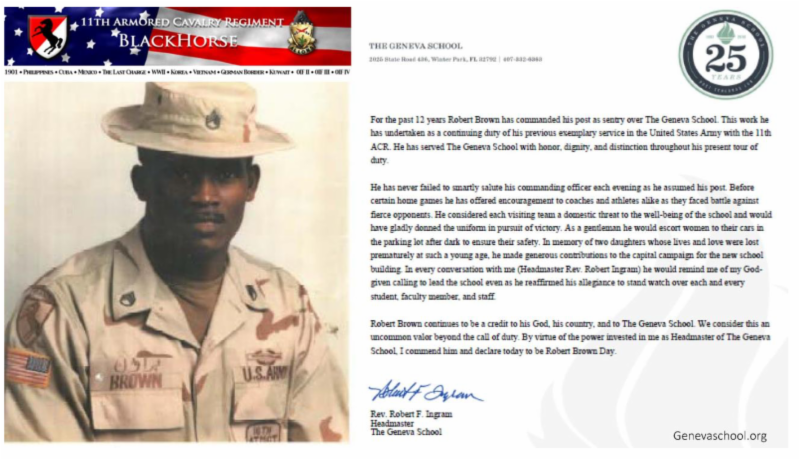 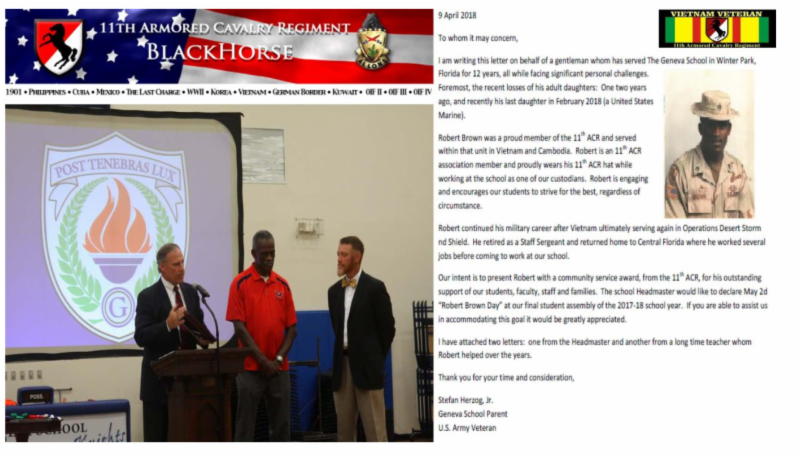 Below is a link to a website that advertises the opportunity to drive former Soviet armored vehicles. Although the website is in German, it might be worth a look anyway. This comes to us courtesy of Robert McMurray, former SIGINT specialist in the 511th MI Company of the Regiment while in Germany.

https://bit.ly/2Ia8FL3opens in a new window

A Display of Pride in His Service with the Blackhorse
The following note is from Don Gray: I recently became a life member of the association. Attached is a PDF of my personalized license plate. PLTOH6 means “Pilot of an OH6”, the scout helicopter I flew in Vietnam in 1971-72 for the Air Cav Troop in the 11th ACR. I thought you might like it for publishing in your newsletter since I have seen other such plates published in the past. 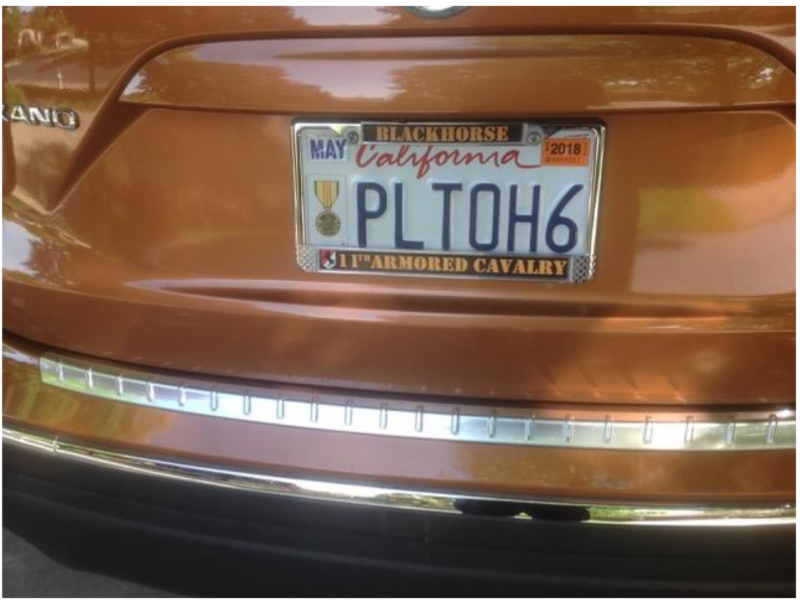 11th Armored Cavalry helps young man with rare disorder live his dream of being a Soldier By Sgt. Justin May 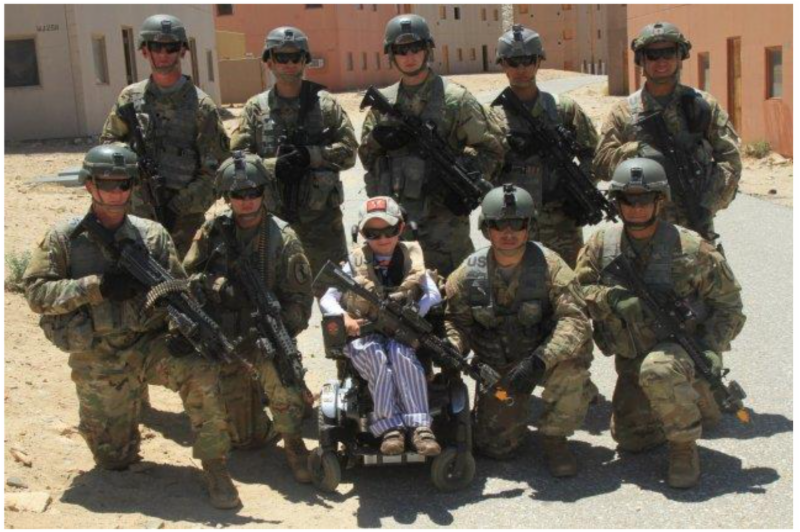 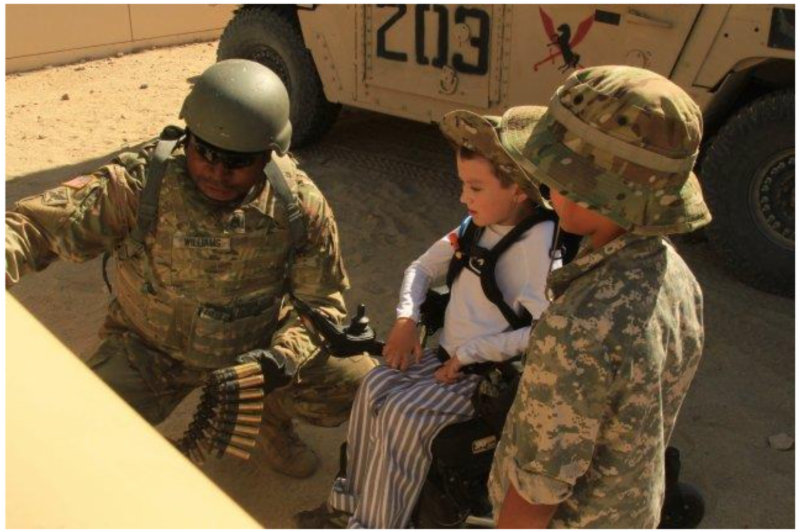 Ethan Larimer, center, 11th Armored Cavalry Regiment Honorary Blackhorse Trooper, and Grant Averill, Ethan’s friend, are briefed about the capabilities of the vehicle mounted Browning M2 .50 Cal. Machine Gun at the National Training Center, Calif., on June 1, 2018. The M2 was one of many weapons reviewed by Ethan during his day in the life of a Blackhorse Trooper. (Photo Credit: U.S. Army photo by Sgt. Justin May) 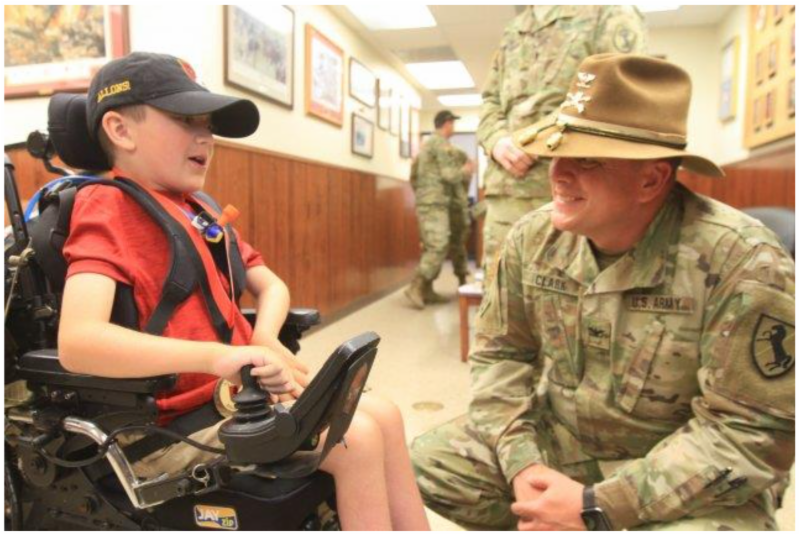 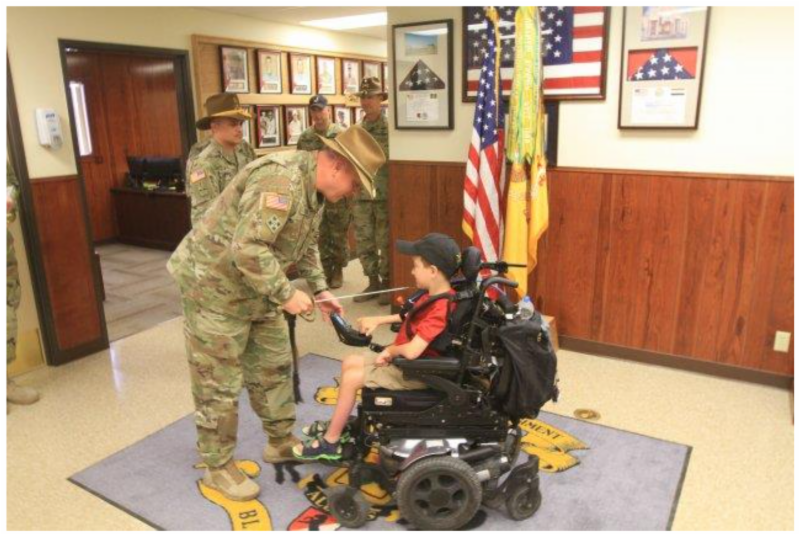 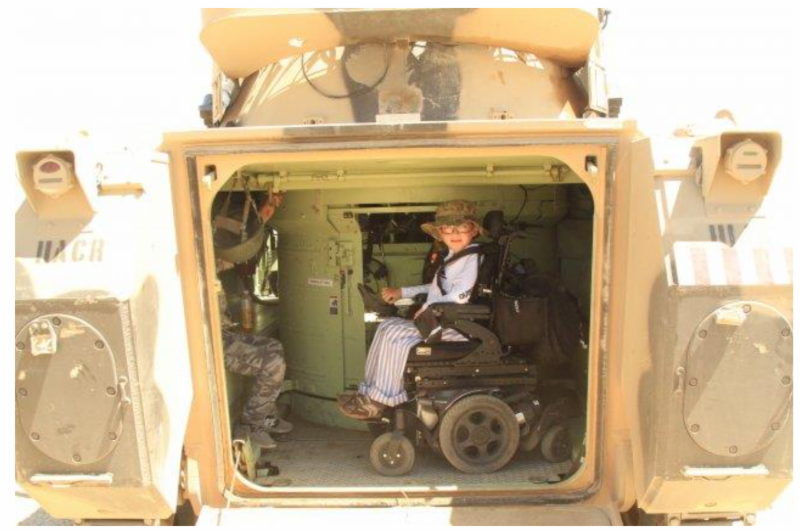 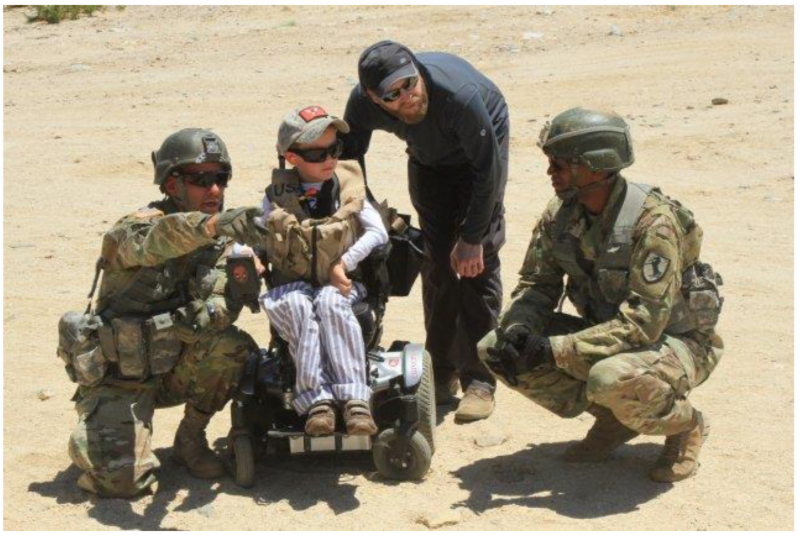 The 11th Armored Cavalry Regiment Troopers explain building clearance drills to Ethan Larimer, 11th ACR Honorary Blackhorse Trooper, and Daniel Larimer, Ethan’s father and former Blackhorse Trooper, at the National Training Center, Calif., on June 1, 2018. (Photo Credit: U.S. Army photo by Sgt. Justin May)
IRVINE, Calif. — Young Ethan Larimer has always dreamed of joining the Army and following in the footsteps of his father, Daniel Larimer, who was a “Blackhorse Trooper,” as Soldiers of the 11th Armored Cavalry Regiment are known.
However, Ethan has a unique neurological disorder — Charcot-Marie-Tooth neuropathy type 4J, or CMT4J — that will prevent him from joining the military. Because of his medical condition, Ethan has difficulty with motor functions and uses a wheelchair.
“Ethan has dealt with his disease very well,” said Daniel Larimer. “He has been hospitalized for weeks on end at times as well as continuous physical therapy. One thing Ethan has taught me is that even if you have some barriers or limitations, that doesn’t need to be your life.”
Though Ethan will never be able to serve in the Army due to his disability, he still dreams of riding into battle on the back of tanks. When Ethan’s mother, Victoria Perkins, contacted the 11th Armored Cavalry about fulfilling Ethan’s dream, the famed Blackhorse Regiment was happy to oblige.Ethan recently spent a day with Soldiers of the 11th Armored Cavalry, who helped Ethan check off all the items on his bucket list. Upon arrival to Regimental Headquarters, Ethan was inducted into the Blackhorse Honorary Rolls, an honor set aside for those who have served the regiment above reproach. The regimental commander then presented Ethan with the Regimental Command Team coins.
Ethan was able to see demonstrations of several guns, including the M240B Machine Gun, Browning M2 .50 Cal. Machine Gun, M249 Squad Automatic Weapon, and M4A1 Carbine. He also got to drive his wheelchair into a tank and see a helicopter.
“Through his diagnosis and living with CMT4J, Ethan has shown great resiliency,” said Col. Joseph Clark, Regiment Commander, 11th Armored Cavalry Regiment. “My interaction with Ethan was inspiring, because he maintains positivity, and refuses to allow his disability to stop him. Throughout the day, he was curious and asked many questions about what we do. His personality, his drive, and his grit are exactly what I look for in my troopers, and I am honored to have made him a Blackhorse Trooper.”
Ethan was given a personal “Box Tour,” an event where people are shown the ins and outs of training and battles at the National Training Center in Irvine, California. Then he led a platoon during building clearance drills through the streets of “Razish,” a simulated town at NTC.
Later the 11th Armored Cavalry’s Horse Detachment gave Ethan a tour of the stables and brought some of the horses out to greet the young Blackhorse Trooper. The Horse Detachment conducted a special demonstration for Ethan and his family to mark the end of Ethan’s day.
“Even though I am no longer a service member, the post and the unit I was a part of really pulled out all the stops to accommodate my son,” said Daniel. “We are all really grateful to come back and see what the Blackhorse has become and to hear ‘Allons’ again.”
Another Example of Blackhorse Pride Blackhorse Regiment Cavalry Motorcycle (BHRCM) Guidon Courtesy of Beau Richards 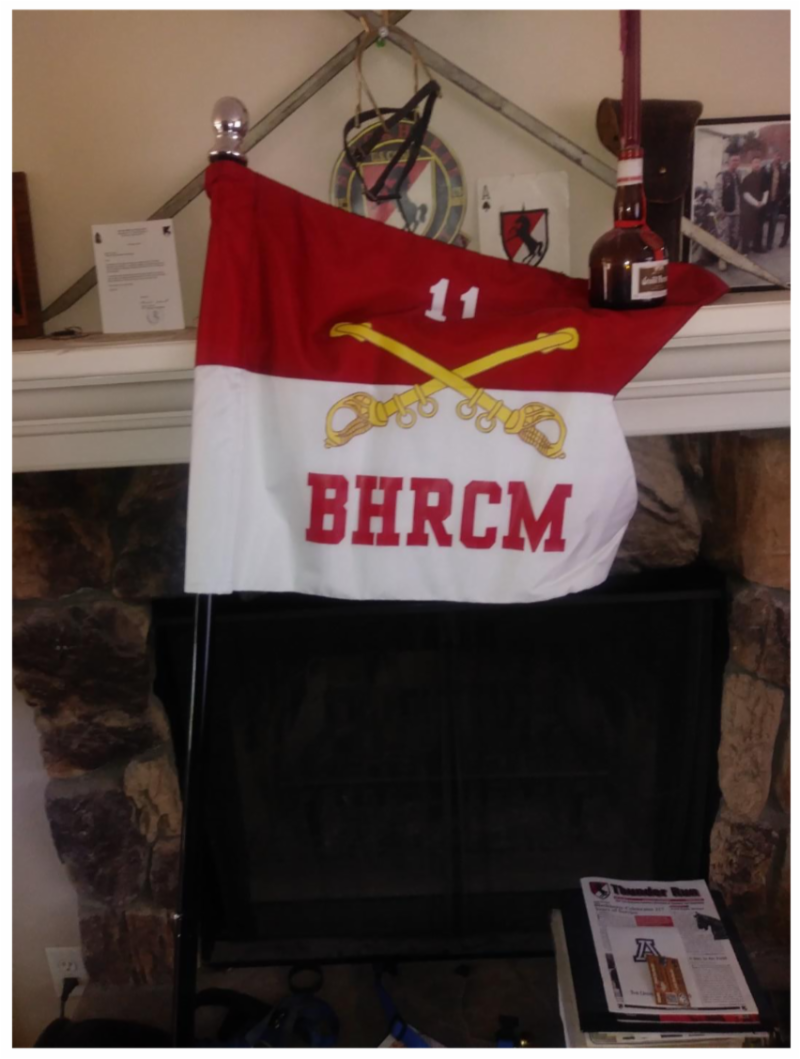 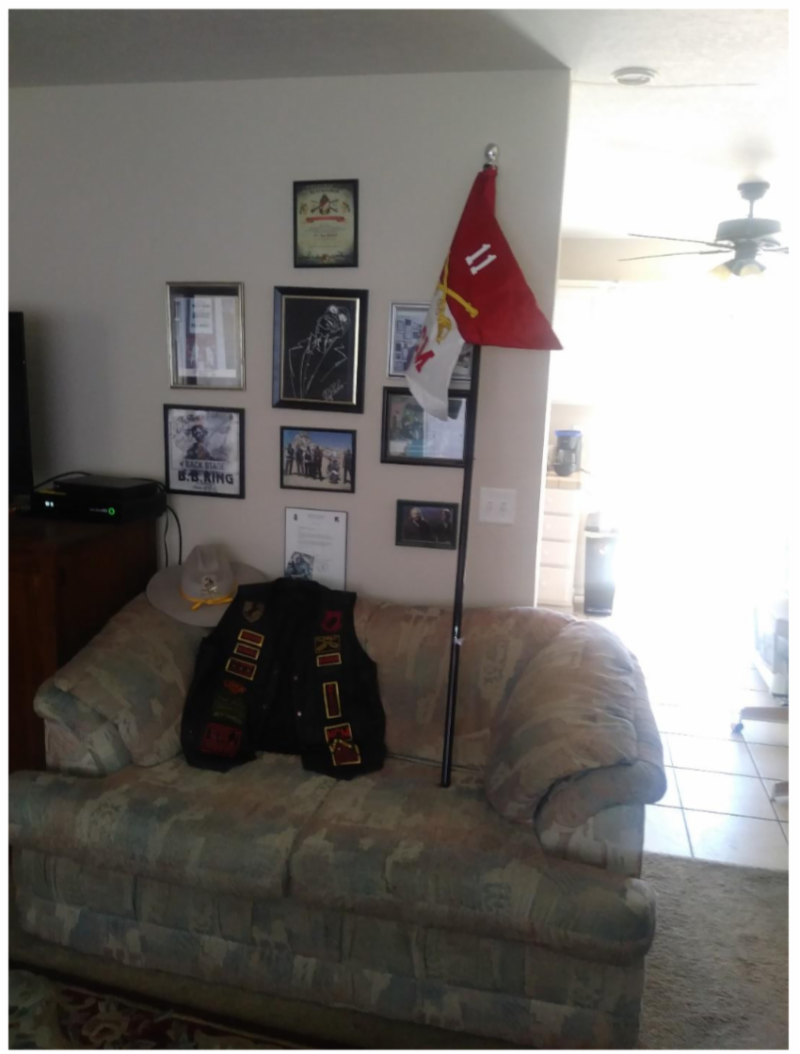 It’s Not Too Early to Reserve Rooms for Next Year’s Reunion!
Next year’s Blackhorse Association Family Reunion will be in Las Vegas June 6-9. Everyone can book rooms for next year’s reunion by using group code A9BAC06 on the Gold Coast Casino group reservation website: http://www.goldcoastcasino.com/group.opens in a new window
To get the group rate, reservations must be made by May 3, 2019.
We had some confusion this year with reservations and it’s imperative that everyone check their calendars and make certain to book the exact dates they plan on arriving
and leaving. If attendees fail to show on the arrival date they provided, they risk having their reservation cancelled as a “No Show.”
Reservations are “first come, first served”; the rates we have for 2019 are outstanding for our early arrivals, and we encourage you to book now.