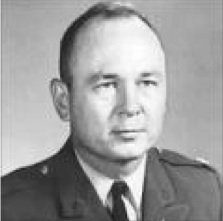 He was born in Auburn, New York, July 11, 1927, the oldest child of the late George C. and Irene (Schreck) Hoffmaster. He grew up in Philadelphia and graduated from St. Thomas More High School in 1944 and attended Valley Forge Military Academy in 1945. He received an appointment to the United States Military Academy at West Point and graduated in 1949. He retired from the United States Army in 1979, completing a distinguished career of 30 years. During that time, he served at U.S. military installations in Korea, along with Straubing, Heidelberg and Baumholder, Germany. His service also included a combat assignment in Vietnam, where he was the executive officer of the 11th Armored Cavalry Regiment and was awarded the Purple Heart, the Bronze Star, the Air Medal and the Legion of Merit. In retirement, he enjoyed spending time with his children and grandchildren, and vacationing in Garden City, South Carolina. He was an avid sports enthusiast, in particular a fan of the Philadelphia Phillies, Philadelphia Eagles, the Army Black Knights, and the Lee Lancers. A military burial service will be held at Arlington National Cemetery at a later date. Arrangements are by McCoy Funeral Home, Blacksburg, Virginia. Please see more information at:

opens in a new windowhttp://www.legacy.com/obituaries/washingtonpost/obituary.aspx?pid=174897278#sthash.40OwDWJW.dpuf

CSM (ret) Horace Baxley. Horace Baxley of Smiths Station, Alabama, passed away on May 6, 2015; he was 78 years old. CSM Baxley served 20 years in the Army as a cavalryman, to include service as First Sergeant, A Troop, 1st Squadron, 11th Armored Cavalry Regiment in Vietnam in early 1968. He loved soldiers and he loved to travel in his RV and on his bike.

After his retirement from the Army he worked at the Fort Mitchell National Cemetery. His awards include the Vietnam Service Medal w/4 Bronze Stars, Good Conduct Medal x 5, 2 Overseas Ribbons, the Combat Infantry Badge, Bronze Star w/V Device, Army Commendation Medal, Vietnam Campaign Medal w/60 Device, Presidential Unit Citation Award, Expert Rifle, Meritorious Service Medal, and the Cross Of Gallantry with Palm. He is survived by Jeri, his wife of 56 years, son Van, and daughter Laura. CSM Baxley truly loved Alabama football, fishing, riding his Harley Davidson, working outside on his garden, and doing many other outdoor things. He was a devoted member of the Patriot Guard Riders. He was also devoted, loyal, honest, respectful, and a man of integrity and standards. On all the Patriot Guard Rider missions that he rode on, the folding of the U.S. flag was one of his pet peeves. He was a very dedicated Patriot Guard Ride member and touched the lives of many. He could be called day or night when in need and he only had two questions: “When?” and “Where?”

The following is a note from Rob Butler. His service was nice and quick, which is what he wanted. He said one time: “Hell. Just cremate me, put me on the back of my bike, and take me home.” The Patriot Riders did just that. His urn was placed over his saber and Stetson. The family asked that I read “Fiddlers Green” and I was proud to do so. It was a very tough day.

Peter grew up in Wyncote, Pa., near Philadelphia, and graduated from Wyncote High School in 1965. He attended Virginia Military Institute for one year, and he then went on to four years at the United States Military Academy at West Point, graduating in 1970 and following a long line of West Point graduates in his family. He served his country for 30 years (6 years on active duty, 24 in the Army Reserve), retiring in 2000 as a Colonel. During his active duty, he served in the Vietnam War (1971-1972) as a platoon leader in G Troop, 2nd Squadron, 11th Armored Cavalry Regiment, and as a Battalion Commander during Desert Storm in Saudi Arabia and Iraq (1990-1991). Peter was an equally accomplished businessman, finishing his career as President of U.S. manufacturing company WEXCO.

Peter loved hiking through the Blue Ridge Mountains, and he loved his church, his work at the Mission, and his family. Peter was remembered at a memorial service on May 14, 2015 at the Blacksburg Christian Fellowship Church, in Blacksburg, Virginia; he will be interred later this summer at West Point.

In lieu of flowers, the family suggests that those wishing to honor Peter’s memory consider making a charitable donation in Peter’s name or sending a cherished story about Peter to betsycjones@nullaol.com.

Master Sergeant (ret) Rick “Gunner” Wagner. Gunner passed away on May 22, 2015. Gunner was beloved by all those who knew him, and not only from the Vietnam era. He was a decorated trooper, and he was a frequent attendee at our reunions, often coming all the way from his home in the Philippines (to claim his gift for coming the longest distance!!). Gunner was inducted into the Regimental Honorary Rolls in 2011 at our Las Vegas reunion. There is no formal ceremony planned.

A Note from the Director of Point Alpha

Some days have passed since the Last Border Patrol event, and I am still overwhelmed by the echo we have received.

I want to thank you all for your participation; you made this day a milestone in our foundation’s history! I’m sure you understand that I didn’t have the opportunity to talk to each one of you–as much as I wanted to.

I am on tour in the States at the moment and had the chance to tell YOUR story, which is also OURS, to a lot of students and an interested audience in Chicago; Canton, OH; Atlanta; and Columbia, SC so far. Thanks to the cooperation with the Goethe-Institute Washington and the American Council on Germany (ACG), we were able to work on that part of our foundation’s mission.

You may remember that I previously mentioned our project to extend our exhibition by adding the topic “everyday life”, thus focusing the attention a bit on the long-lasting German-American civil-military relations, especially in the Fulda/Bad Hersfeld region.

Our vision is to make this a true bi-national project; therefore, we created the attached website with the possibility of a different kind of donations by way of crowdfunding. Together with the possible support of the German Federal Government, funds of the foundation, and veteran donations, we hope to realize the exhibition project together with you–the ones who formed part of the region’s life for such a long period.

You will find all the necessary information at the attached site: opens in a new windowhttp://igg.me/at/pointalpha/x/10646607. Naturally we are also interested in all kinds of documents, pictures, etc. of that time which you can forward to me at any time. If you have any questions, please don’t hesitate to contact me at any time.

My best regards to all of you!

Progress on the Blackhorse Memorial

The creation of the Blackhorse Memorial, which is the resting place for our Monument that was moved from Fort Knox to its new home in Fort Benning, is proceeding apace. Click the link for a series of photos on the work for the new setting and some of the new stones that will adorn the Memorial. The work is stunning!

opens in a new windowClick here for more info and to view a gallery of our progress.

We all cite 1969 as the time when the Blackhorse Association and 11th Armored Cavalry Veterans of Vietnam and Cambodia received the impetus to take care of our own. The following is an earlier example taken from the pages of our Regiment’s history.

1969 was not the first time that Blackhorse troopers took care of one of their own. Six decades earlier, the cavalrymen assigned to the Eleventh United States Cavalry were also deployed on foreign shores. Second and Third Squadrons were part of the U.S. Army of Occupation chasing guerrilla fighters seeking to overthrow the government of Cuba. Garrisoned in Pinar Del Rio – the heart of the insurrection – troopers routinely conducted reconnaissance in force and show-the-flag operations throughout the countryside. It was during one of these operations that Trumpeter Harry Nelson, F Troop, Third Squadron, came down with typhoid fever.

Harry Nelson joined the Eleventh Cavalry on his first enlistment just a few months after marrying his sweetheart back in Fort Dodge, Iowa. Shortly after arriving in Cuba, Bugler Nelson had submitted a request for a compassionate reassignment. That request was approved by the 3rd Colonel of the Regiment (Colonel James Parker), and Nelson was just days away from returning to Iowa, reassigned to the Second Cavalry Regiment at Fort Des Moines. However, the fever took him before he could get back to his wife and new-born child.

His fellow Fox Troopers held Harry Nelson in high regard, so they began to take up a collection for his widow. Word spread, and within a short period of time, the officers, troopers, and ladies of the Eleventh Cavalry had donated $235.10 – a tidy sum at a time when a private like Trooper Nelson earned but $13 a month.

As one contemporary report put it, the donation reflected “the high type of fraternity that exists in the service among the men and the deep sympathy they have for Mrs. Nelson, the young wife and mother.” *

It’s Not Too Late to Sign up for the Reunion!

We’re expecting a great turnout and a great time in Las Vegas. If you haven’t signed up yet, it’s not too late. Walk-ins are also welcome. We can sort out the details and find you lodging. opens in a new windowClick here for more details!