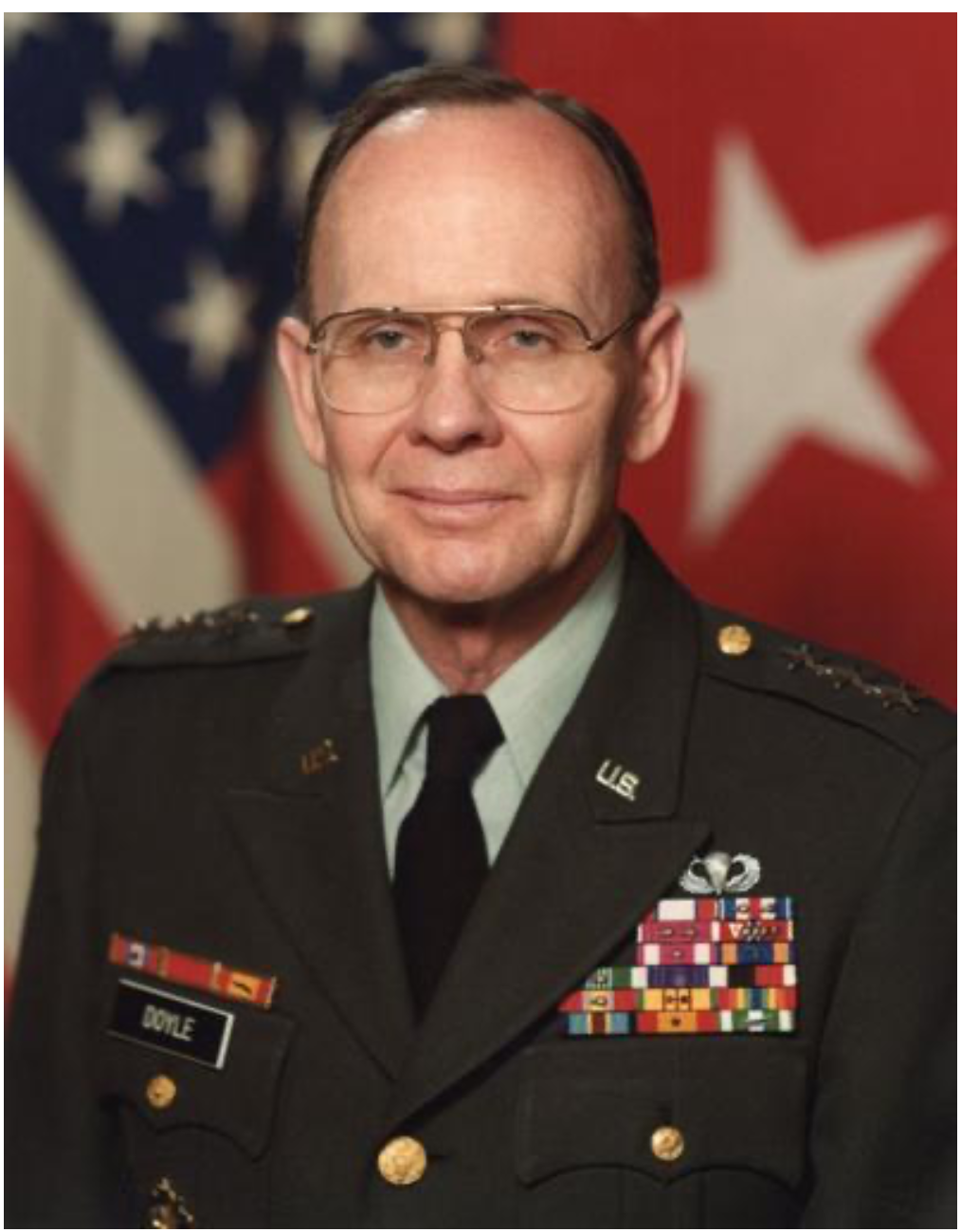 He was born December 8, 1931, in Pottsville, Pennsylvania, to the family of Edward and Emily Doyle. He graduated from Woodrow Wilson High School in Washington, D.C. In November 1942, David’s father, Col. Edward Doyle, was killed in the North African Campaign. A couple of years later, Dave’s mom remarried to Lynford Alexander.

In 1951, he enlisted into the U.S. Army as a private. He remained in the Army for 33 years and rose to the rank of lieutenant general.

Dave married the love of his life, Janet Leah Doyle, on July 26, 1952. They would go on to have three sons: David, Jeff and Steve. David was a devoted husband and great family man. He earned a BS degree from the University of Maryland, an MS degree from George Washington University, and a MMAS degree from the USA Command and General Staff College.

Some of Lt. Gen. Doyle’s most memorable assignments include service with 3rd Squadron, 11th ACR as a major in 1966-1967; 3/11 Squadron Commander from June – December 1969; commander of the 3rd Armored Cavalry Regiment; Deputy Commanding General of the U.S. Army Armor Center; Deputy Commanding General of III Corps; Chief of Staff for U.S. Army Forces Command; and Assistant Chief of Staff for Information Management for the U.S Army.

His other awards include the Distinguished Service Medal, Legion of Merit, Bronze Star, and Purple Heart; his personal interests included soccer, international affairs, and military history. Lt. Gen. Doyle had a long-standing relationship with the 3rd Armored Cavalry from Fort Hood. He was the 54th Colonel and designated the honorary colonel for the regiment.

After retiring from the Army, David worked with EDS, Wels Research, and Hughes Training. David Doyle’s remains will be flown to Arlington National Cemetery, where he will be buried with his life-long sweetheart, Jan Doyle. Jan passed on June 1, 2016.

David is preceded in death by his father, Edward Doyle; his mother, Emily Doyle; his brother, Jim Doyle; and his stepfather, Lynford Alexander.

Survivors include his sons David, Jeff and Steve. He is also survived by his sister-in-law Sara Wenner and brother-in-law Rolfe Wenner; his daughter-in-law Marilyn Doyle; his son-in-law Robert Vega; and three grandchildren (Melissa, Alex and Martin).

The family thanks him for always being there for them. Remembrances may be shared at www.wcfish.com.

Blackhorse Gathering In Gettsyburg, PA May 14-16, 2021  Just as in the summer of 1863, a group of determined military men converged upon the crossroads village of Gettysburg with a purpose. The purpose this time was peaceful: to renew the bonds of brotherhood earned some 45 years ago while performing our border mission.

Bill Hutton and Bob Mark put out the call to H Company nearly a year ago and the word spread. We were joined by John Caldwell, 2/11 ACR S-3, and Roger Sturgis of India Troop. Twelve came from all points of the compass (Pennsylvania-4, Florida-2, California-2, Texas-1, Mississippi-1, Virginia-1, and South Carolina-1).

Harry Owens, with his experience doing this with ROTC cadets, led the stop-by-stop battlefield tour and discussions over two full days. At each point we discussed leadership, tactics, weapons effectiveness, terrain appreciation, and command and control. 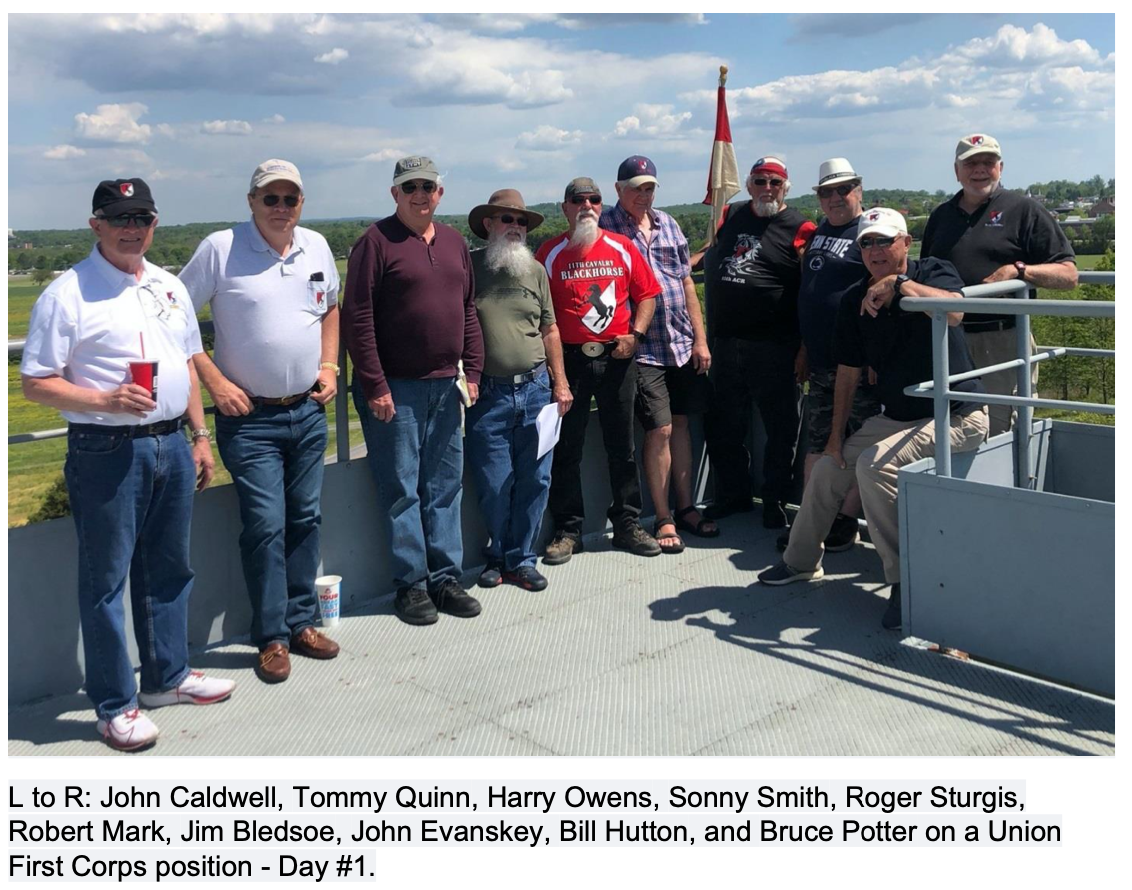 We posted our H Company guidon when we made stops on the battlefield. It made me recall the popular Jody “Everywhere we go, people want to know, who we are, where we came from…” Other tourists made us part of their “Gettysburg Experience” by asking questions and taking photos of us. It was quite humbling.

The evenings were for comradery and refreshment. On Friday, we sat in a circle poolside and got caught up. One by one, we each reviewed our lives over the last 43+ years. The twelve different paths followed by each of us were truly fascinating! Saturday was very emotional as we spoke a few words about those who have gone Fiddler’s Green; we toasted in their memories. 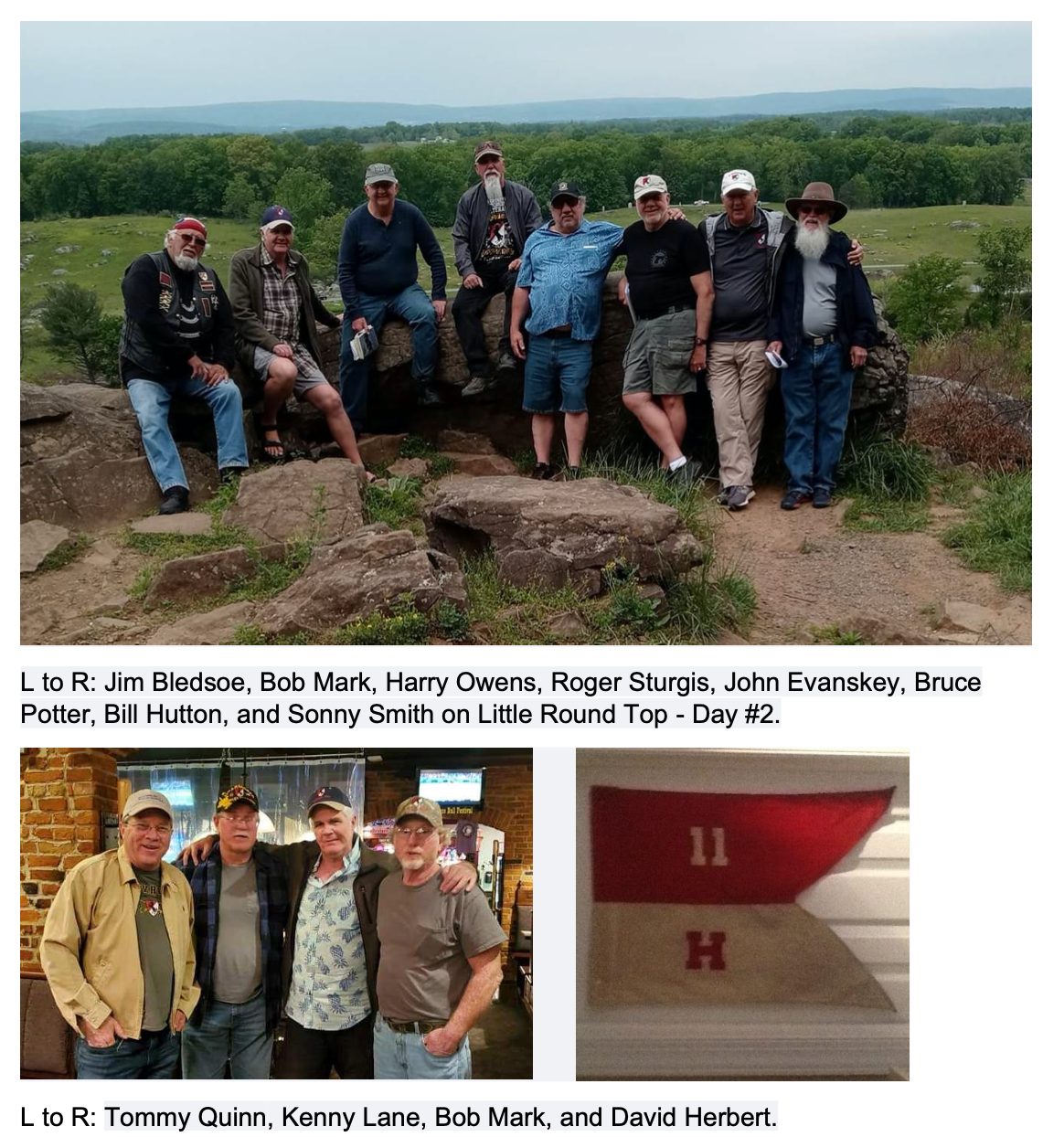 As we finally parted, we all agreed that it had been too long, and we vowed to stay in touch. To those who read this and could not make it, we are so sorry that you missed a great event. But don’t worry, we told and retold stories about all of you! PROSIT!

The Blackhorse Association and Blackhorse Scholarships were born of a promise made by Colonel George S. Patton and Sergeant Major Paul Squires (both now deceased) to a dying L Troop trooper on May 2, 1969 on a battlefield in Vietnam.

The vow to “not let people forget us” and “take care of our kids” became the inspiration to form the Blackhorse Association. The association was formed 1970, and the scholarship program was created in 1970 at Fort Knox, KY.

Since the founding of our association, we have provided over $900,000 to help educate the children of our Troopers.

The scholarship amount is $3000 annually payable at the beginning of the Fall Semester each year for no more than four years total. The Patton scholarship is funded at $5000 and is awarded to the annual top applicant.

There were 32 qualified applicants this year; 16 will be awarded scholarships.

The winner of the Patton Scholarship is the son of a Vietnam Veteran wounded in action with the Blackhorse.

These kids are a smart group. The average GPA is 3.69, which is a little higher than in 2020. Three students are in pre-med, two are in business, and two are in nursing.

We continue our newest tradition of named scholarships this year, a trend that started in 2015 and we hope will continue. Members can designate a scholarship for a $3000 donation.

Thanks to our Scholarship Committee for its support and hard work in rating our candidates. Thank you all for your support of this important effort. These scholarships add up, and to support our scholarship fund, we need your continued support.

This year, we reduced our traditional funding level, though we are confident that our Association will maintain a viable program as the economy and country return back to normal. Please visit our scholarship page and look at the opportunities to contribute; help us continue to support these scholarships for deserving children.