Skip to content
Troopers Down
Michael A. Lemire. Michael, 62, of Benton Harbor, Michigan, died Wednesday afternoon, February 11, 2015, at Hanson Hospice Center in Stevensville, Michigan. Michael was born in St. Joseph on December 16, 1952 to Richard and Betty Lemire. He married Kathryn Brooks on March 19, 1983, and they celebrated 31 years of marriage. Michael worked at Bosch Braking for more than 17 years before retiring. He loved spending time on his computer. He was a member of the Blackhorse Association, the Blackhorse Regiment Cavalry Motorcycles, and a life member of the VFW. Michael was very proud of his Army career, both in the active Army and many years as a tanker in the Michigan National Guard. He was a very loving husband. Michael is survived by his wife, Kathy; his “children”: Sasha, Clancey, Baby, Peanut, Bella, and Kiley; and his sister-in-law, Janice (Jim) Tull.
Malcolm Stanton (Gil) Gilchrist. Gil Gilchrist, Colonel, U.S. Army (retired), age 72 of Sevierville, Tennessee, passed away Monday, February 9, 2015. Col. Gilchrist graduated from the U.S. Military Academy and earned Master’s Degrees from Rice University and the U. S. Army War College. He retired after 26 years in the U.S. Army, having served two tours in Vietnam with the 11th Armored Cavalry Regiment. Gil was a platoon leader and troop executive officer, 1965-1967, and he served with C Troop, 1969-1970. He was awarded the Silver Star for Valor, two Bronze Stars, and a Purple Heart. He served in various leadership positions throughout his Army career, including a tour in the Pentagon on the Army Staff. Following retirement from the Army, he held a key position with and retired from the National Rifle Association. He was always a Soldier and loved reading all things military. He served as the secretary of the Sevierville Salvation Army Council, and he was also a Mason and Shriner. He was preceded in death by his parents, Colonel (retired) Malcolm Frank and Mrs. Mary Stanton Gilchrist, and his sister, Ann Gray Gilchrist. Survivors include his wife, Martha Carden Gilchrist; son, Malcolm Thomas Gilchrist and wife Tracy and their daughters Maddy, Morgan, and Katie; daughter, Ann Gray and husband James D. Shell and their son Andrew J. Young and wife Julia, daughter Abigail, son John T. Young, and daughter Haley Shell; brother, Michael Gilchrist and wife Shannon; sister-in-law, Diane Bannister Carter; niece, Lynn Gates Mazurkiewicz and husband Anthony; niece, Lee Carden Martin; niece, Holly Carter Ackerman; nephew, Alan Gates and wife Vail; nephew, Lane Gilchrist and wife Wendi; nephew, Jack Gilchrist and wife Katie; nephew, Courtney Carter; and numerous great-nieces and great-nephews. In lieu of flowers, the family requests donations be given to the Sevier County Humane Society Building Fund, P. O. Box 976, Pigeon Forge, TN 37868. Interment will be at Arlington National Cemetery at a later date.
______________________________________
Fundraising Update

The paver campaign, to help pay for the move and enhancement of our monument at Fort Benning, is officially complete! Over 240 pavers were purchased, and we give a great big Blackhorse “Thank You” again to everyone who bought a paver. We now have sent the final listing to the contractor/vendor for final processing. As a direct result of these efforts and that of the 11th ACVVC, our new monument will begin to take shape in March 2015 with the pouring of the concrete pads and sidewalks. We will provide future updates to you as the monument progresses in its completion.

The 1901 annual fundraiser is still open and we will gladly accept donations that will earn chances for the drawing at the reunion in Las Vegas. For more information, please visit opens in a new windowhttps://www.blackhorse.org/donate.cfm.

Everyone is welcome to join us for a casual picnic in the park. Bring something to BBQ, something to share (salad, dessert, or munchies), and your beverage of choice.

Directions:
I-80 to Davis. Take the Mace Blvd exit. Go North around bend (Mace becomes Covell Blvd). Turn Left on Monarch Lane. Take 1st right onto Temple. The Park is one block ahead on left.

I-5 to Woodland, exit at Road 102 to Davis. Proceed South to Davis, approx. 8 miles. Turn left at the 1st major intersection, which is Covell Blvd. Go about 1 mile to Monarch Blvd, turn right, and go 1 block. Turn right onto Temple. The Park is one block ahead on left. 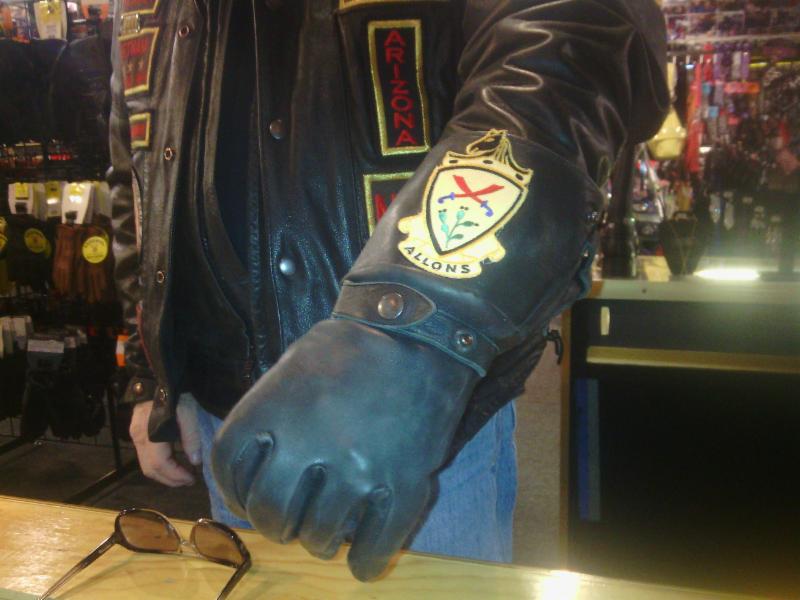 This great motorcycle glove comes to us compliments of Beau Richards. What a great way to show Blackhorse pride. Well done Beau!

Our new address is below. Please use this for all official communications.

The Germans are planning a ceremony to commemorate the last border patrol of the Cold War on April 24, 2015 at the former OP Alpha, now the Point Alpha Museum. Several veterans of the Regiments will attend to take part in the ceremony and to rekindle old friendships. Dave Cowan is honchoing the Regiment’s participation. If you have not been contacted but are interested in attending, please contact Dave at opens in a new windowdave.cowan@nullacrpros.comcreate new email as soon as possible.

On June 12, 2015 at the Blackhorse Association Reunion in Las Vegas, there will be a drawing for two 1901 Campaign Hats. There is no cost to participate in the drawing. opens in a new windowClick here to download an entry formopens PDF file .

Regimental NCO and Soldier of the Quarter 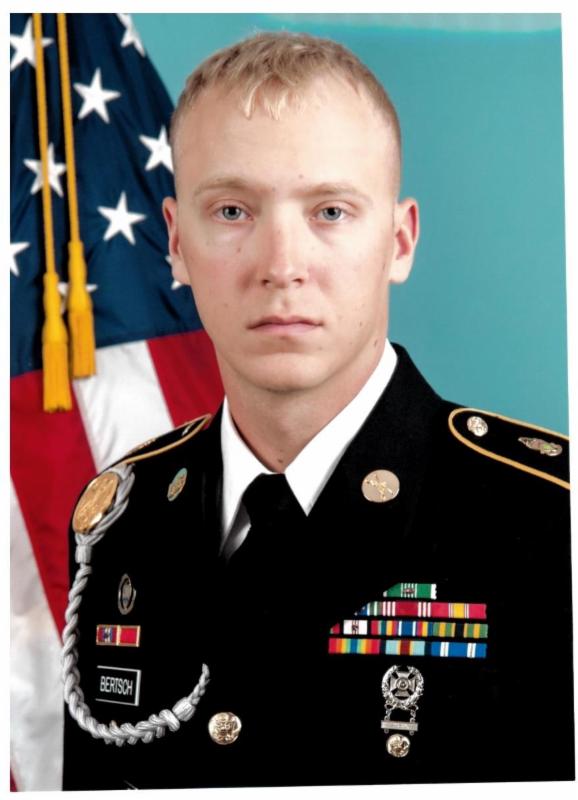 SGT Tyler C. Bertsch entered the military in October 2010 from his hometown of West Fargo, North Dakota. He attended One Station Unit Training at Fort Knox, KY. He graduated as an M1 Armor crewman 19K10 on March 4, 2011.

SGT Bertsch was Battalion Soldier of the Month in March 2013 and Brigade Soldier of the Quarter of April 2013 while in Fort Stewart. Sergeant Bertsch deployed in support of Operation Enduring Freedom from February 2012 to October 2012 in which he drove over 12,000 miles and delivered much needed supplies to Village Stability Platforms spread out across RC North and RC West. He is an expert with the M9 Pistol.

He has loaded for two Abrams gunneries and was a gunner for an additional two gunneries. As a gunner, he shot 901 and 879. All four of the gunneries resulted in first round qualification.

SGT Bertsch’s short-term goals are to attend Advanced Leader Course, earn Excellence in Armor, and be promoted to Staff Sergeant. His long-term goals are to retire from the Army as a First Sergeant, become an M1A2 SEP Master Gunner, achieve a bachelor’s degree in Mechanical Engineering, participate in the Sullivan Cup competition, and become a member of the Sergeant Audie Murphy Club. 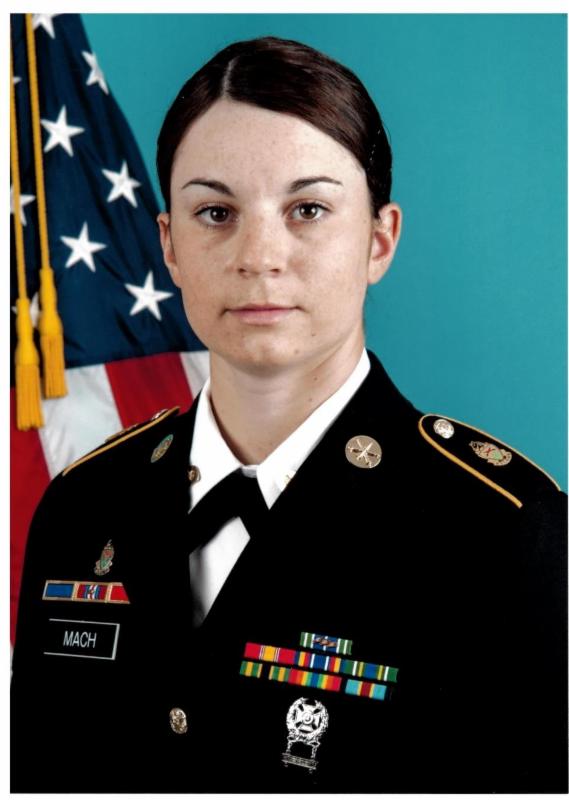 SPC Holly Jo Mach was born March 31, 1993 in Lincoln, Nebraska. She graduated high school in May 2011 and attended college for a year at Hastings College of Nebraska before joining the Army in March 2012. SPC Mach attended basic training in Fort Leonard Wood, Missouri and graduated in June 2012. She then attended her Advanced Individual Training at Fort Sill, Oklahoma where she graduated and became a qualified Avenger Crewmember in August 2012.