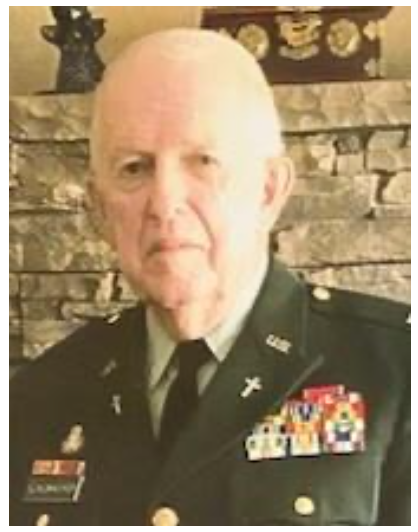 Chaplain (Colonel) John W. Schumacher (U.S. Army, Ret.) went to his heavenly home on February 5, 2021. He was born in Osceola, Indiana on June 21, 1934 to Herman John Schumacher and Julia Beatrice (Needham) Schumacher. He married Martha Ann (Catching) Schumacher on June 8, 1957, in Springfield, Missouri. Together they raised four children: Laurie (Lou Huesmann), Julie, John (Christine), and Eric (Janetta). They have eight grandchildren and one great-grandson. Those who knew him knew how much he loved his family.

John graduated from Bob Jones University with a degree in education, which he used for three years before answering God’s call to full-time Christian service. He attended Grace Theological Seminary in preparation for ministry in the Army chaplaincy. During his 30 years of active military service, he also earned a Master’s degree from Long Island University. He had two combat tours in Vietnam. His first assignment in the Army was with the 11th Armored Cavalry Regiment starting in July 1965. He trained with them and deployed to Vietnam with the regiment in 1966; he served the regiment in Vietnam as a chaplain from 1966 to 1967.

John was a graduate of the U.S Army Command and General Staff College and the United States Army War College, where he later was assigned as faculty to teach ethics. He served in several senior chaplain positions but never forgot serving the soldiers in their units. He is the author of “A Soldier of God Remembers.”

After his Army retirement, the Schumachers eventually moved to the Phoenix area where John served as a chaplain for three different law enforcement agencies. He also represented his denomination for 22 years as the Endorsing Agent with the Department of Defense for those who applied to enter the military chaplaincy.

John had a love for hunting and fishing, especially in his beloved Alaska, where he served for 22 years as part of the volunteer staff and as the chaplain for the fishing camp.

John was preceded in death by his father Herman, mother Beatrice, three brothers, and one sister. He is survived by his wife of 63 years, his four children, grandchildren, great-grandson, and sister Phyllis Smith of Winona Lake, Indiana. He will be buried in the National Memorial Cemetery in Phoenix with military honors. There will be a Celebration of Life at Palmcroft Baptist Church, in Phoenix, Arizona, when Covid health guidelines allow.

The annual Blackhorse Family Reunion will be in San Antonio, TX June 3-6 at the Holiday Inn San Antonio River Walk. The last day to register for the hotel at the discounted rate is this Friday, May 7.

Registration for the reunion can be done in person or online. Please visit the Blackhorse Family Reunion webpage at https://www.blackhorse.org/reunions/ to make reservations for the hotel and reunion.

Call for Donations:  As we approach our 2021 Reunion in San Antonio, the Blackhorse Association is requesting donations for the Silent Auction.  Proceeds from the Silent Auction assist in funding our annual scholarships.  We had a great response last year and exceeded our expectations.  So, we have set our goal to exceed last year in both participation and funds raised for the scholarship.  To that end, we ask that you to set-aside items for donation and ensure they travel with you. The hotel can be contacted directly at 210-272-1514

Request for Assistance from the Regiment

The Regimental Public Affairs Officer, CPT Cain, is planning on creating a Memorial Day slideshow/video. He is soliciting input via social media.

Any veteran of the Regiment who is no longer with us can be added to the video. There is no requirement for the veteran to have died in combat or in the line of duty.

Here is the information he requests: Photo Rank Name Timeframe and unit served Date of birth Date of death

If interested in including your veteran in this project, please email the information to CPT Cain at Blackhorsepao@nullgmail.comcreate new email.   The cutoff date for emails is May 23.