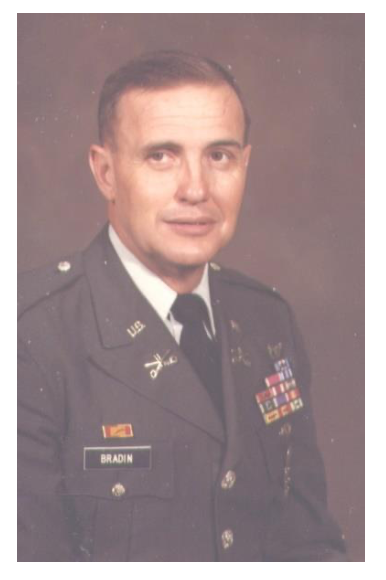 Colonel (Ret.) James W. Bradin. It is with great sadness that we announce the peaceful passing of James W. Bradin, Colonel, U.S. Army Retired. The family was able to be with him in his final moments, and we now reflect on his life.

Jim was born in Pinehurst, North Carolina, son of Benjamin M. Bradin and Anna Bower Bradin. As he grew into a rebellious teenager, his parents thought it best to send him to the Carlisle Military Academy in Bamberg, South Carolina. During his time at Carlisle, he met a girl from Orangeburg who would forever change his life.

After graduation from Carlisle, he enrolled in The Citadel, in Charleston, South Carolina. Jim loved The Citadel and the military program, but he was having a little too much fun and found it hard to study. During his time at The Citadel, he began to date that young girl from Orangeburg, Jervey Gramling. In 1958 and by the grace of God, Jim graduated from The Citadel with a degree in history and was commissioned as a 2nd Lieutenant in the U.S. Army.

In June 1958, Jim made the best decision of his life when he married Jervey; they began a journey that would last for 62 years.

Over the next 30 years, Jim and Jervey moved to military bases all over the US and to Germany. In 1980, as fate would have it, Jim returned to The Citadel. He was assigned as the PMS and Commandant of Cadets and later served on the Board of Visitors.

Jim served in many armor and cavalry positions in his early career, but he was eventually assigned to the 11th Armored Cavalry Regiment in Vietnam as the Commander of Air Cavalry Troop. During the period of April to July of 1969, he was awarded 4 Silver Stars and the Distinguished Flying Cross for heroism for his actions.

Jim dedicated himself to his career but also made time for his family and community. He enjoyed sailing and camping with the family. Jim was the first American dependent to become an Eagle Scout in Germany, and this led to his active role in the Boy Scouts for many years.

On September 14, 2020, Jim Bradin was given his final assignment to Fiddler’s Green, where he will be reunited with all of his fellow cavalrymen. His service to his family and nation was one of total commitment – he never did anything halfway. He was an avid boater, military historian, and a published author. He is survived by his wife Jervey; his three children James Bradin, Jr., Stuart Bradin, and Michelle Holtzclaw; and their 6 grandchildren and great-grandchild. Jim will be cremated and, upon the passing of Jervey, they will be buried together in the Beaufort National Cemetery. 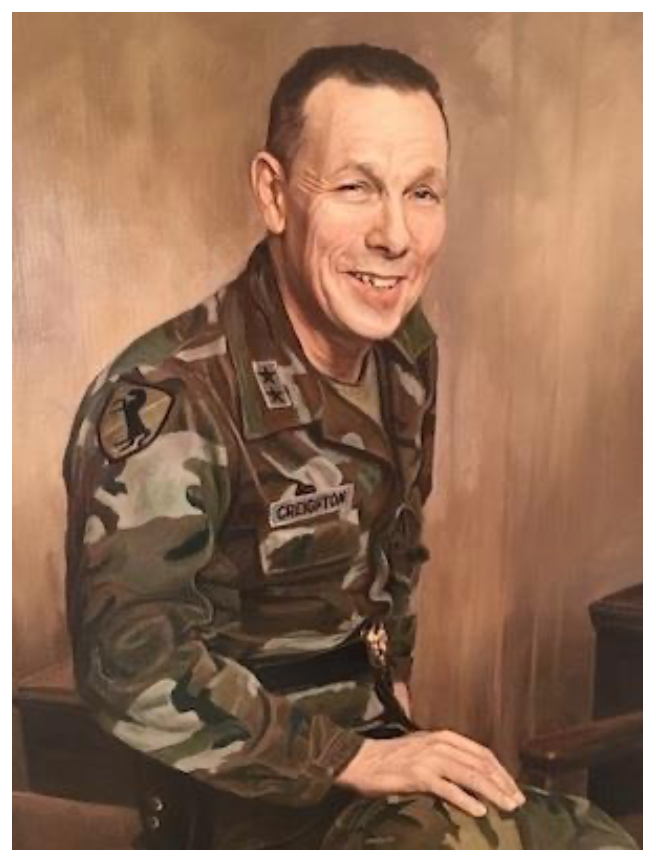 Major General (Ret.) Neal Creighton, September 15, 2020, Louisville, Kentucky. Neal Creighton was born in 1930, and his father, Neal Creighton, was a career Army Air Corps officer who served in World War II as Headquarters Commandant of the 8th Air Force. Neal’s mother was Charlotte Gilliam Creighton, and his sister was Bettie Creighton Hannan. Neal spent most of his childhood years in Chapel Hill, North Carolina, and he graduated from Chapel Hill High School where he played football, basketball, and baseball.

After high school, Neal attended Sullivan’s Preparatory School in Washington DC and entered The United States Military Academy at West Point, NY with the class of 1953. In 1958, while stationed at Fort Knox, Kentucky, Neal married the love of his life, Joan Hicks. Joan and her family were longtime residents of Louisville, and her mother Euthelda “Tola” Hicks passed away in 2010 and rests in Valley Station with Joan’s father, Raymond “Si” Hicks. Raymond was a career employee of the Illinois Railroad, and both he and Neal were Kentucky Colonels. After Fort Knox, Neal served on the faculty at the United States Military Academy, first as an instructor and later as Assistant Professor of Spanish. Neal and Joan became parents to their daughter Linda while stationed at West Point and later to daughter Lisa and son Neal while serving in Panama.

After graduating from West Point, Neal served 31 years in the military, rising to the rank of Major General. He commanded units from platoon to division, including command of 3rd Squadron, 11th Armored Cavalry Regiment in Vietnam in 1968. Later in 1982-1984, he was the Commanding General of the First Infantry Division at Fort Riley, Kansas. After his military service, he was the President and CEO of the McCormick Foundation in Chicago, Illinois. Neal received numerous military decorations, including seven for valor; one of these decorations was the Silver Star when he was in the 11th. In 2005, the United States Military Academy designated Neal as a Distinguished Graduate.

Neal was a great patriot and leader of soldiers, but most of all, he was a husband and a father. He lived his life loving his family, and he passed away with great memories and no unfulfilled dreams. Grief is the price you pay for love, and the Creighton family’s grief is profound; however, they would pay that grief over and over again to have one more day in this world with Neal. He passed peacefully on September 15, 2020 holding his wife Joan’s hand, and he left his family and friends behind to reunite in heaven.

Neil Creighton earned a Silver Star in March, 1968 as the 3rd Squadron Commander in Vietnam, along with several Bronze Stars for Valor. He was instrumental in 3rd Squadron being awarded the Presidential Unit Citation. 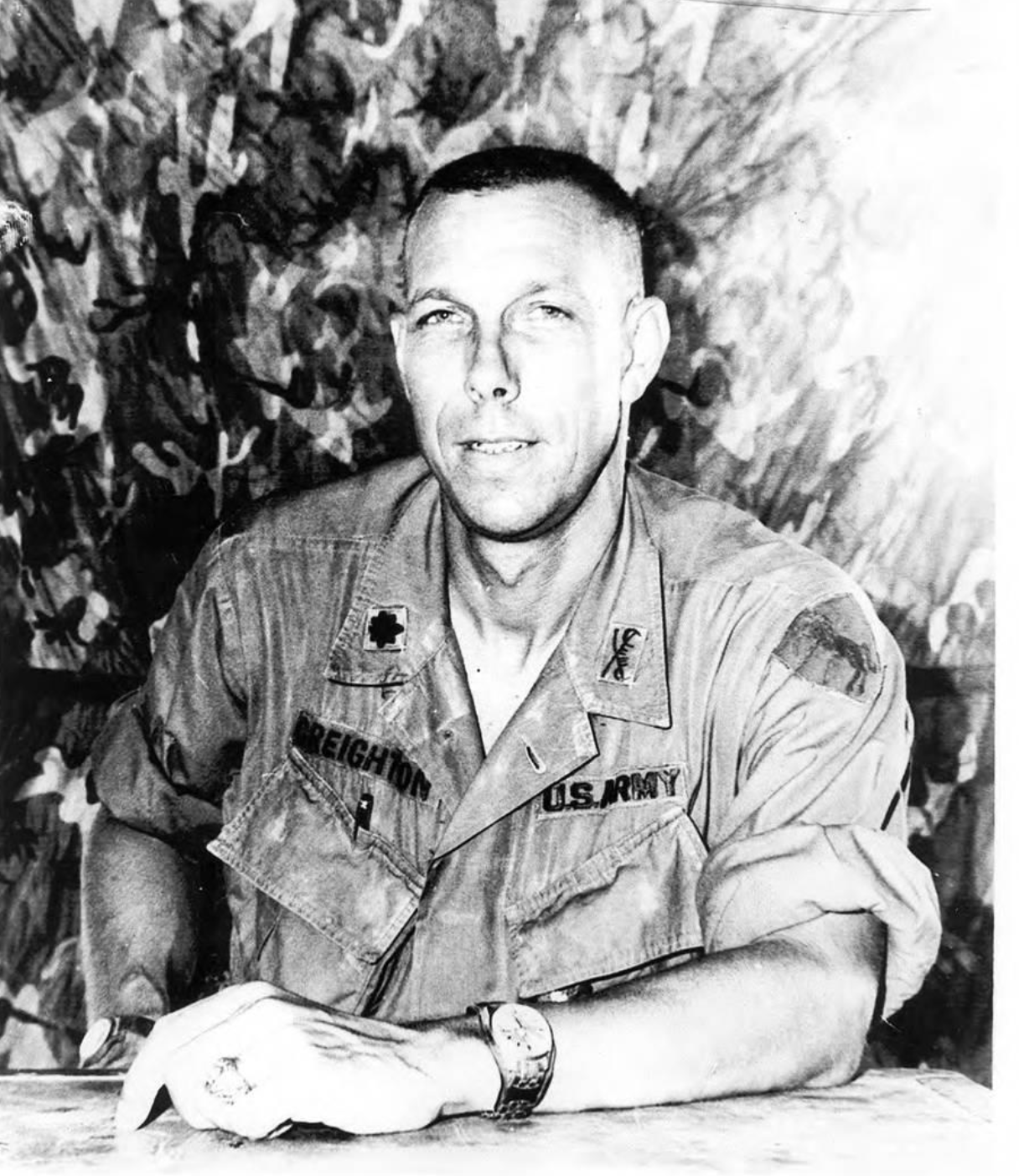 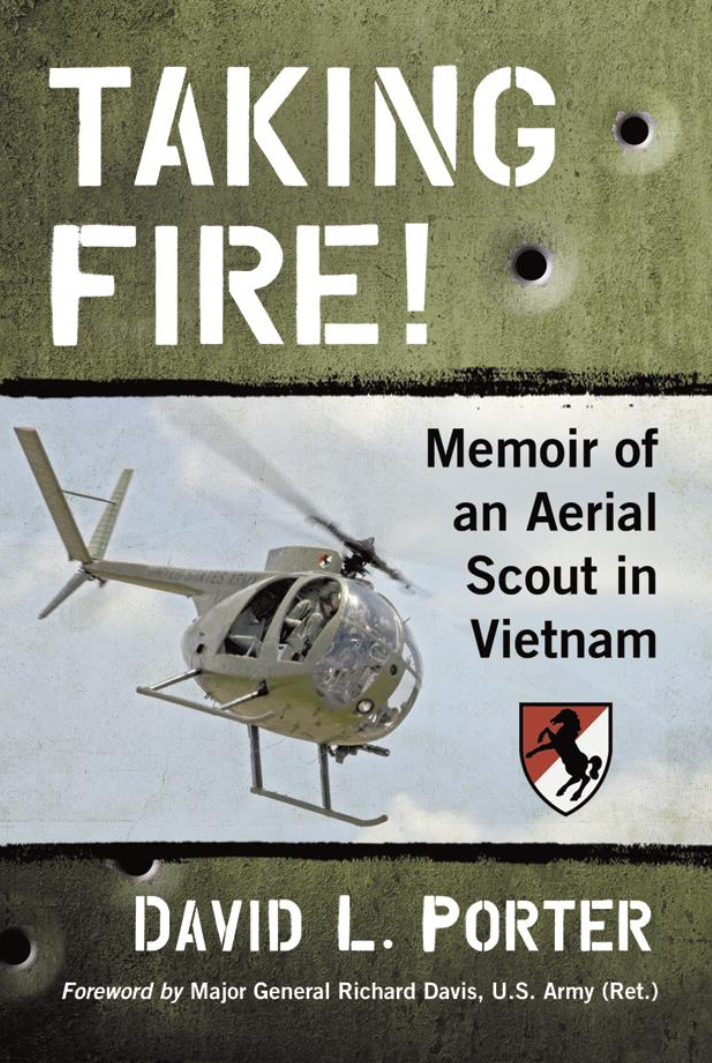 As a first lieutenant in the 11th Armored Cavalry Regiment, U.S. Army pilot David Porter was section leader in an Aerial Scout platoon in Vietnam. Their mission was to conduct reconnaissance in OH-6 aircraft (a.k.a. Light Observation Helicopter or “Loach”) near the Cambodian border. Finding and engaging the enemy at low altitude in coordination with an AH-1 Cobra gunship circling above, these units developed a remarkable method of fighting the Viet Cong: Hunter-Killer Operations. The tactic had great local success but died with the war. Few today are aware of the hazards these pilots faced during times of intense combat. Porter’s vivid memoir recounts the internal workings of a legendary air cavalry troop, in-the-cockpit combat actions, and the men who were key players on this perilous battleground. Colonel David L. Porter retired after twenty-seven years in Combat Arms. In addition to Vietnam, he served multiple tours as a cavalryman on the German border, and he commanded a cavalry squadron during the collapse of “the wall” in early 1990. He served in multiple combat divisions, at the Armor School, and in various staff positions, including the Pentagon. In retirement, he became the Director of Admissions at Colorado Technical University and is currently a government contractor training America’s soldiers. He lives in Jackson, Tennessee.

Below are a draft program and a related “Tulsa World” article from the August 30, 2020 edition. 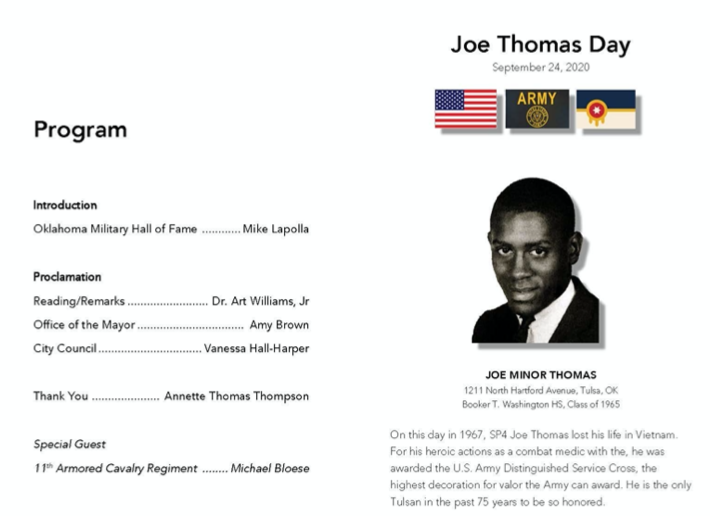 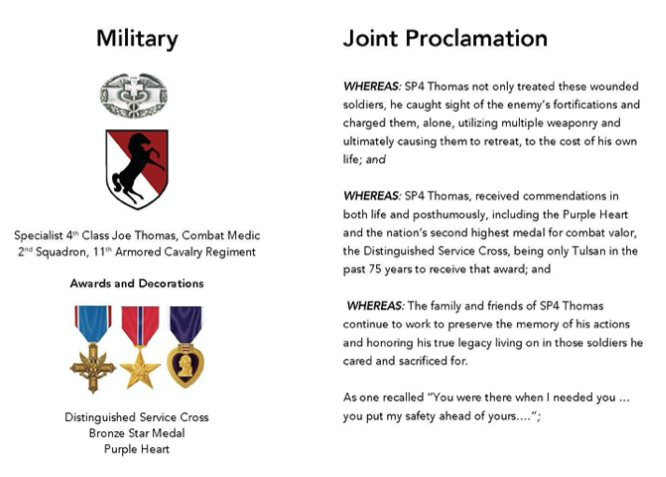 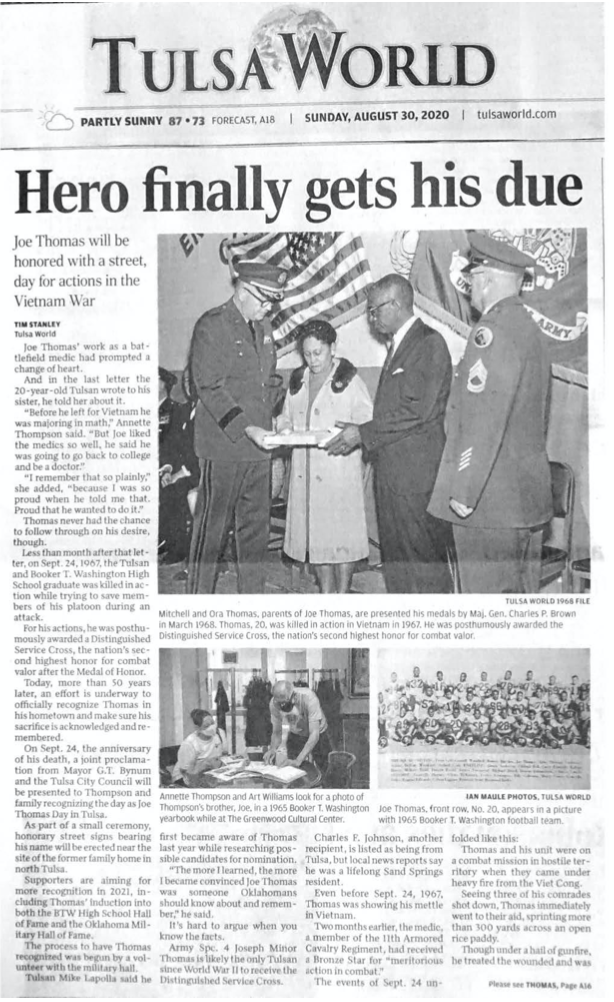 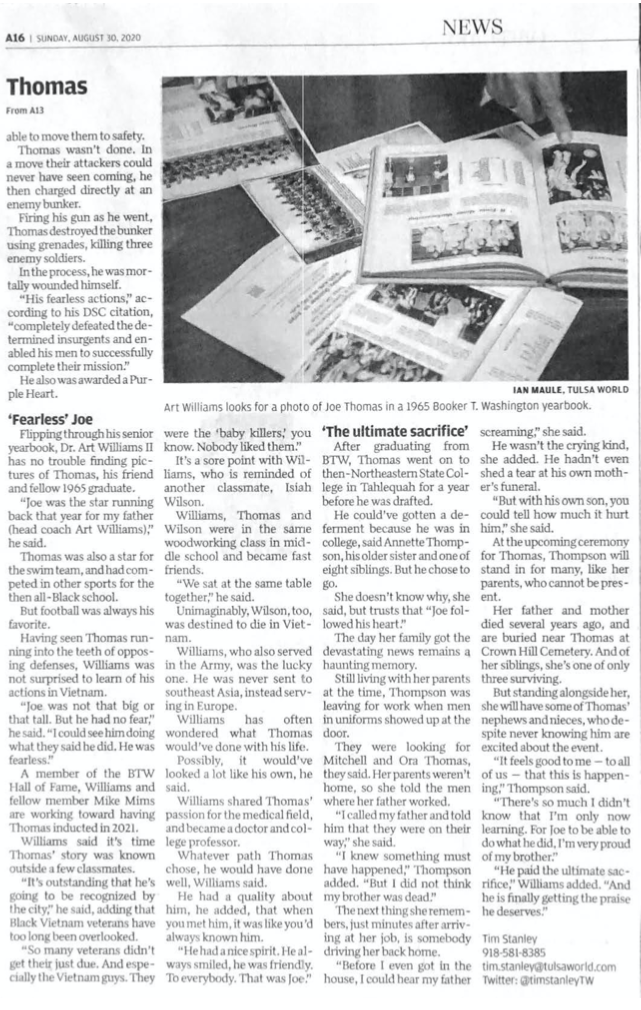 After cancelling our 2020 reunion, we are returning to San Antonio for our 2021 Blackhorse Family Reunion.

(this includes taxes and breakfast). Self-parking is an additional $10 per day. Guestrooms include:

Feel free to take a closer look at our hotel at www.hiriverwalk.com.

Information on the registration process and timing will be released by November 1, 2020. Hotel reservations can be made right now by contacting the hotel. 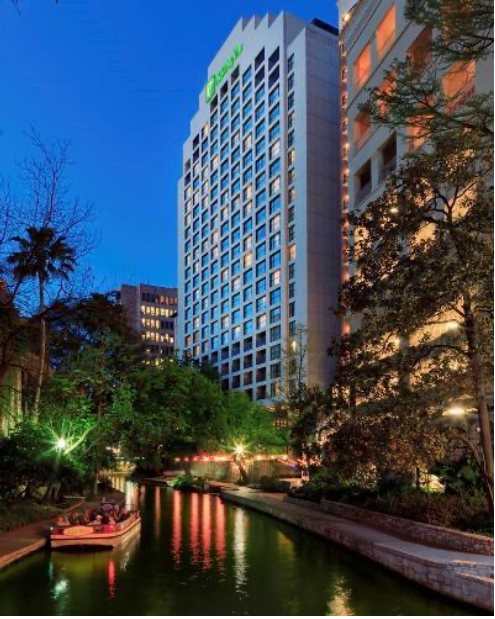 AmazonSmile Update Thanks to those who have used this program for our association!

The Blackhorse Association recently received its quarterly update from Amazon:

This is your quarterly AmazonSmile donation notification to inform you that Blackhorse Association Inc received a new donation of $171.55.

Thanks to customers shopping at AmazonSmile, everyday purchases generated over $200 million in donations to charities worldwide so far.

The Blackhorse Association has an exciting opportunity for someone to serve as its volunteer Database Manager. The BHA moved its membership records to a secure Customer Relationship Management system to better serve the Troopers of the Regiment, and we are looking for a motivated individual who has practical experience in membership databases and data quality management. The position takes just a few hours each month and will improve our organization’s capacity to serve our Troopers and their families.

If you want to ride with us in an active role on the board, please contact Bob Hatcher at robert.lee.hatcher@nullgmail.comcreate new email.