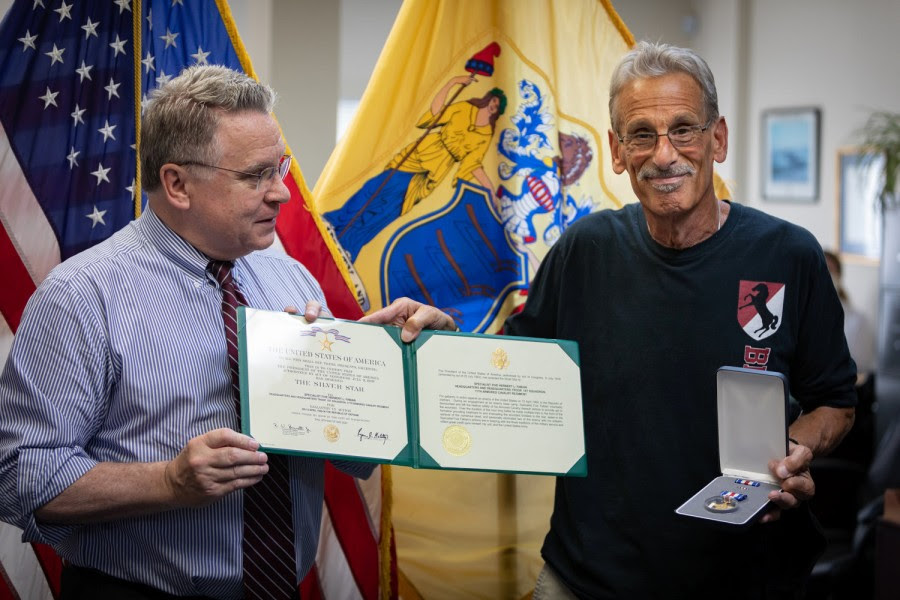 Rep. Chris Smith, left, presents Vietnam War veteran Bart “Doc” Fabian with his second Silver Star at a ceremony in Smith’s office in Freehold, NJ, July 18, 2020. Fabian earned the medal for saving the lives of ten fellow soldiers in a battle on April 13, 1969.

A Vietnam veteran has received his second Silver Star more than five decades after he earned it in a fierce battle at an enemy base camp, where he saved the lives of 10 other soldiers.

Bart “Doc” Fabian, a medic with the 11th Armored Cavalry Regiment during the war, received the medal during a ceremony in Rep. Chris Smith’s office in Freehold, N.J., on Saturday.

He’d been promised the medal a day after the roughly hourlong battle of April 13, 1969, but “it just never happened and I let it go,” Fabian said.

But he began seeking it out two years ago, hoping to share it with the twin sister of one of the 19 soldiers killed in the battle — his vehicle commander — he said in a video interview recorded by MidJersey.news after the ceremony.

During the April battle, Fabian left the “relative safety of his armored cavalry assault vehicle” to tend to wounded comrades, making several trips to the front of the formation to treat them and move them to safety, said a citation Smith read from at the ceremony.

Fabian also killed two enemy fighters with his sidearm and recovered the bodies of several slain comrades, the citation said.

Six men from his cavalry troop were killed, including a close friend, said a statement from Smith’s office.

“Thank you for your bravery — it’s just extraordinary,” Smith told Fabian at the ceremony.

The Silver Star is the military’s third-highest decoration for combat bravery. Fabian also earned two Bronze Stars, two Purple Hearts and an Army Commendation Medal with Valor during the year he served in Vietnam.

He earned an earlier Silver Star on January 11, 1969, in Binh Long province, where the entire crew of his personnel carrier was wounded when their platoon was ambushed.

Fabian took a fully exposed position as he treated and evacuated the wounded. Then, returning to the fight, he grabbed a machine gun and laid down suppressive fire before breaking an enemy assault that nearly overran another group of wounded Americans.

“It’s about your buddies. You just try to do your best so we all get home,” Fabian said.

Harold Fritz, his troop commander during the January battle, earned the Medal of Honor for gallantry that day. Among other heroic actions, the wounded officer, armed with only a pistol and bayonet, led an effort to repel a second wave of attackers.

After Fabian shared his story of the April firefight at an event attended by Fritz and other Medal of Honor recipients a few years ago, his former commander encouraged him to seek out the Silver Star, Fabian said.

“He told me that you don’t give your awards away, the awards are to be shared with everybody — don’t individualize it,” Fabian said. “And I follow orders.”

The following note is from Aaron Nelson, the Blackhorse Association’s Regimental Liaison.

On behalf of the association, Ricky Pring and I recently awarded campaign hats to the

Regiment’s NCO and Trooper of the year. The event was live-streamed by the Regiment on their Facebook page. 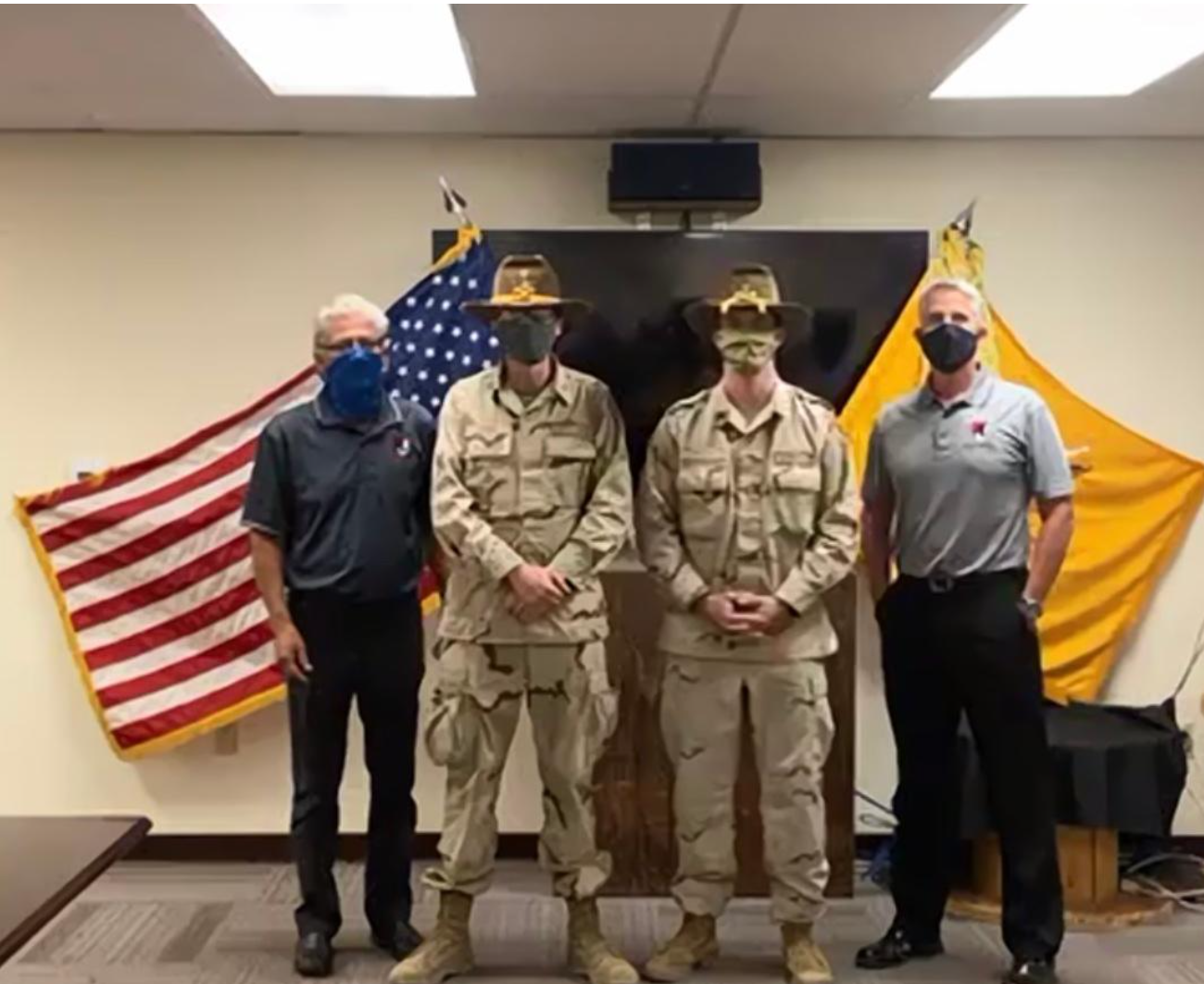 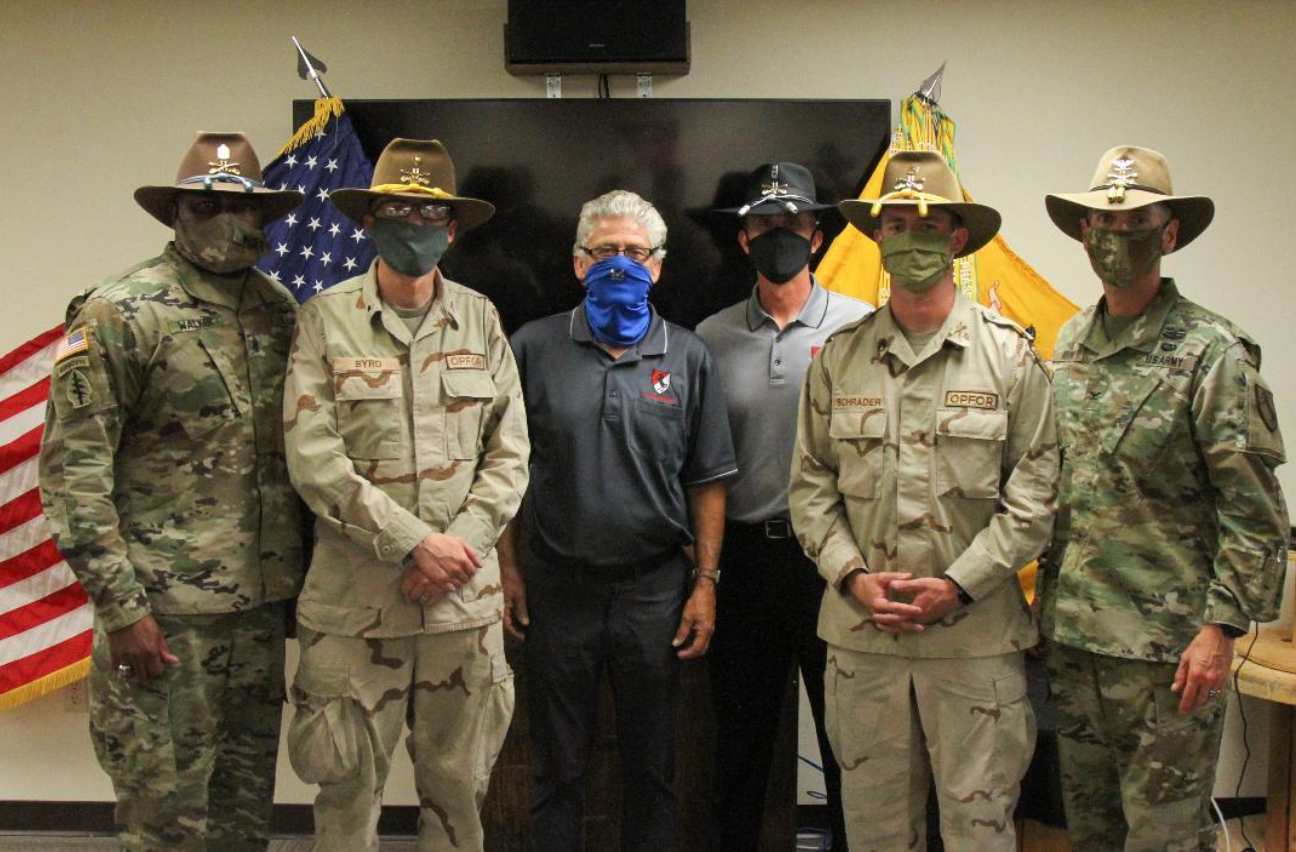 SPC Alexander Byrd, Trooper of the Year. SPC Alexander Byrd was recognized by the Regiment as the 2020 Trooper of the Year. He was born in Visalia, California and primarily raised in Modesto, California where he attended Thomas Downey High School. From 2006 to 2009, he attended Modesto Junior College and then transferred to CSU Stanislaus and earned a Bachelor’s Degree in Criminal Justice. SPC Byrd served in the 1-43 Field Artillery Regiment in the CA Army National Guard from 2014 to 2017. In late 2017, he transferred to the Army Reserve and was assigned to the 368th Military Intelligence Battalion. In August, 2019, he transferred to Active Duty, where he has been assigned to the 511th MI Company, Regimental Support Squadron. He plans to gain leadership experience as an NCO and has future plans of attending OCS.

SSG Brian Schrader, NCO of the Year. SSG Brian Schrader was recognized by the Regiment as the 2020 NCO of the Year. He was born in Clearwater, Florida and grew up in New Port Richey, Florida where he graduated from River Ridge High School in 2013. He then enlisted in the Army and earned the MOS 19D, Cavalry Scout. He has been stationed in Kuwait and Fort Hood. While at Fort Hood he met and married his wife Georgia, and they have two children. Their son Preston is almost 3 years old, and their daughter Paisley is 18 months. SSG Schrader is currently stationed at Fort Irwin and serves as a Section Leader in the 2/11th ACR Scout Platoon. Two of his goals are graduating from the Scout Leader Course and eventually retiring from the Army.

The Blackhorse in Vietnam 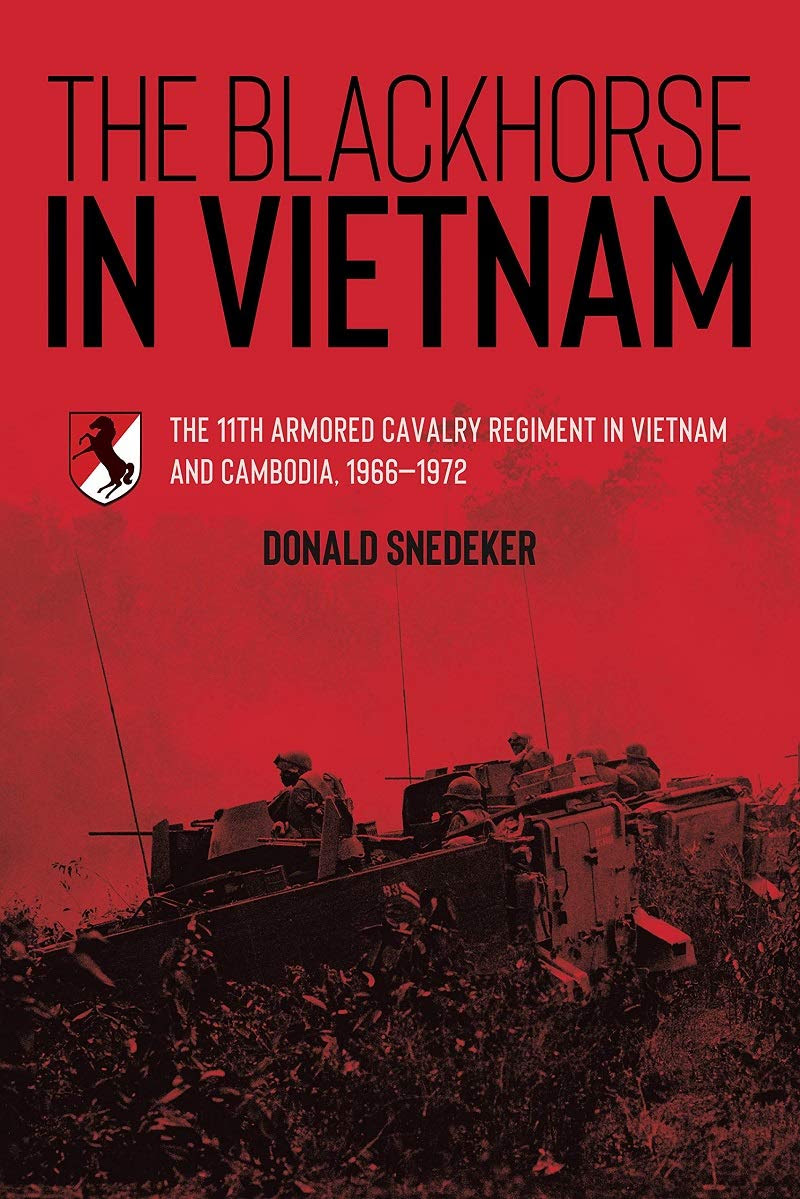 For those who missed the podcast with Don Snedeker on his book, “The Blackhorse in Vietnam,” the interview can be viewed at https://youtu.be/aX89PU2dzfEopens in a new window.

Update on the Point Alpha Foundation New Head of the Foundation Board Says in Inaugural Visit: “First impression very good” 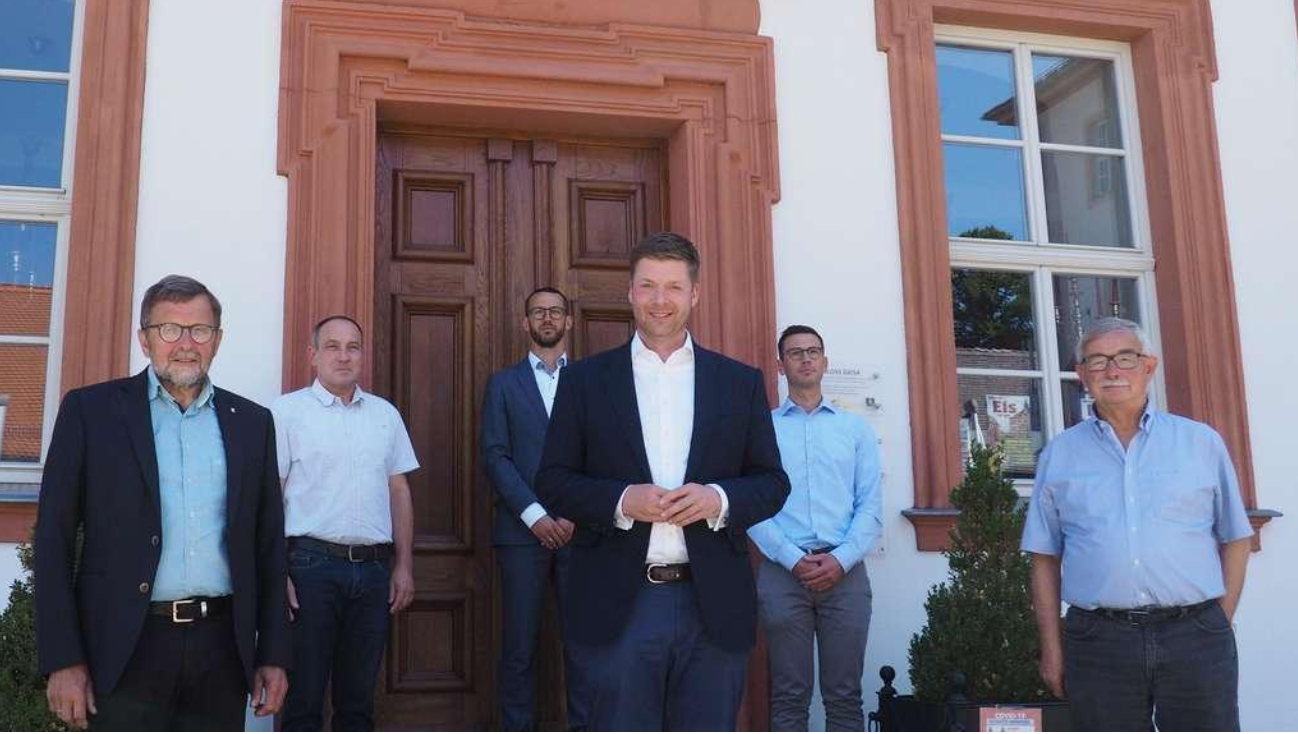 “The Point Alpha Foundation not only enjoys a good reputation within Germany, but also with international partners,” said Dr. Stefan Heck, State Secretary in the Hessian Ministry of the Interior and for Sport, and the new Chairman of the Board of Trustees.

Point Alpha/Geisa. In his role as the new Chairman of the Board of Trustees of Point Alpha, the 37-year-old came to the Geisa Foundation from the Hessian state capital Wiesbaden for his first work and inaugural visit .

Heck informed himself extensively about the situation of the authentic historical location, also under the aspect of the Corona effects, as well as about the structures, current projects and a possible design of the learning and history location in the future. The focus was on the status of negotiations on institutional funding by the State of Hesse and the Free State of Thuringia.

The new version of the foundation statutes was discussed in this context. In addition, the awarding of the Point Alpha Prize and the celebrations for “30 Years of German Unity” on 2/3 October is the theme of the memorial. “My first impression is very good, especially since I met an energetic and motivated team. Now it is important to develop the foundation nationally and internationally together with all those involved in the coming years and to preserve the memorial for the future,” says Heck describing his intentions.

A joint approach by the states of Thuringia and Hesse is very important to him. Communicating the history of German-German division to the younger generations is particularly important to him. Comprehensive data, facts and figures were provided by the honorary board of directors with Dr. Eberhard Fennel and Berthold Jost, the future managing director Sebastian Leitsch and the scientific director Dr. Roman Smolorz. “Our first meeting was very constructive. The new chairman of the board of trustees familiarized himself intensively with the topics and problems of the foundation,” says Fennel. Through his previous activity as a member of the Board of Trustees, Stefan Heck is already familiar with many processes. On the basis of his political experience, one can be confident about funding from Thuringia and Hesse.

The BHA is asking for your support of our scholarship program; please enroll in the AmazonSmile program and select “Blackhorse Association Inc” as your charity of choice.

To encourage your participation, new registrants in this program will be recognized through a limited-time, monthly prize drawing. The next drawing, which will be enhanced from August, will include those who register from September 1 to September 30. We just had some lucky winners in our August drawing, and they’re happy Troopers as a result!

All that is needed is a quick 30-second enrollment in AmazonSmile, which is an Amazon-sponsored charity program where Amazon donates part of its revenue to various charities. In our case, .5% of our members’ total purchases will be sent to the BHA; we will use this money to fund two or more scholarships for our children.

Today, we ask that you visit our website to see more details on how the program works, sign yourself up, and enter the September prize drawing. Please visit:

https://www.blackhorse.org/amazon/opens in a new window.

We appreciate your help, and when you (or a family member or friend) enroll from September 1 through September 30 (at the link above), this is what you’ll qualify to win in a random prize drawing:

* Seven new registrants will win 60%-off coupons to be used on any item in the Blackhorse Store: www.BlackhorseStore.orgopens in a new window.

* Two new registrants will win an item from the Blackhorse Store. For September’s drawing, we’re offering your choice of any polo or shirt, cap, fleece vest, sweatshirt, or youth & toddler item (all are great gift ideas). You select it, and we’ll ship it to you for free.

* All new registrants will be entered into the 2021 Blackhorse 1901 Club drawing. The drawing will be conducted during the 2021 Blackhorse Family Reunion in San Antonio. Although we hope you’ll attend the reunion, you don’t need to be present to win. Five 1901 Club winners will choose a free prize of either a saber, set of spurs, or cavalry hat.

Last step: When you receive your registration confirmation email from Amazon, please forward it to our copy editor, Randall Ponder, who is coordinating our AmazonSmile 2020 campaign; he’ll enter your name into the prize drawing. If you have any questions about signing up or anything involving our new incentives program, please contact him as well. His email is RandallPonder@nulloutlook.comopens in a new windowcreate new email.

We thank you, and the college students of our troopers thank you too!