Chaplain Larry Haworth is now passing through Fiddlers’ Green on his way to a well- deserved reward and an honored seat in His Savior’s presence.

Larry died of natural causes on August 15, 2022 at the Army Residence Community in San Antonio, Texas.

Chaplain Haworth and his wife Deanna were known and loved by the phalanx of Blackhorse Troopers, not only those who served in Vietnam, but also many of the Fulda Gap Legion in Germany. Both were ever present at all the 11th ACVVC reunions from 1986 through 2015, when their debilitating health no longer permitted them to travel. They moved into the Army Residence Community in San Antonio, with Deanna passing in January of 2021 and Larry, in August. Both will be interred together at a cemetery in Newhall, California in September.

During 1969-70, Captain (Chaplain) Larry Haworth was assigned to the 2nd Squadron, 11th Armored Cavalry Regiment. It was Larry’s second tour in Vietnam, and he kept his drive and enthusiasm for staying with the cavalry troopers in the field. Larry was given the well-earned call sign of “Saint 6.”

His connection with the cavalry was only beginning. A few years later, the 11th ACR was in Germany, and Larry was a community chaplain in the Cav’s area. Once the 11th Armored Cavalry’s Veterans of Vietnam and Cambodia was formed, Larry continued his ministry in attending every reunion for the next 30 years.

On February 14, 2019, ten members of the 11th ACVVC went to San Antonio to present Larry with a Lifetime Achievement Award, in testimony to his many years of dedicated ministry. The surprise visit was headed by 11th ACVVC Vice-President Frank Church, who read:

“Captain Lawrence E. “Larry” Haworth was the chaplain for the 2nd Squadron, 11th Armored Cavalry Regiment in Vietnam during the period of 1969 and 1970 (8/1/69 – 7/31/70). Every Sunday he would make his rounds to all the front-line troops by air or land, across rice paddies and through jungles. He would travel to where we were.

“He would bring in his bag, his Bible, his robes and set up a make shift altar on sandbags, C-Ration boxes, or whatever was available. He would hold religious services for anyone that felt a need to attend.

“I attended some of these services and always came away with a better feeling in my soul. After the service he would always give everyone an opportunity to speak with him privately. I took advantage of that at least once. I don’t remember what the topic was, but I do know that it meant a lot to me for him to listen and offer spiritual guidance, for those were horrific times in the life of a soldier. There is no doubt that many young men enduring the ugliness of war felt the same as I did.

“In 1986, the veterans of Vietnam formed an organization known as the 11th Armored Cavalry’s Veterans of Vietnam and Cambodia (11th ACVVC). Col. Haworth was one of many that joined our organization. Annual reunions were planned and held with Larry once again traveling and serving as our chaplain.

“For over 30 years, he made every reunion across the country and once again donned his robes and Bible and presided over our memorial services and Sunday Worship. Offering his spiritual guidance and love for us.

“He also wrote an article in every Thunder Run quarterly newsletter. They most often were based on experiences from Vietnam that we could all identify with. He would add a passage from the Bible that related to that article. He always signed off with, ‘God loves you and so do I.’” 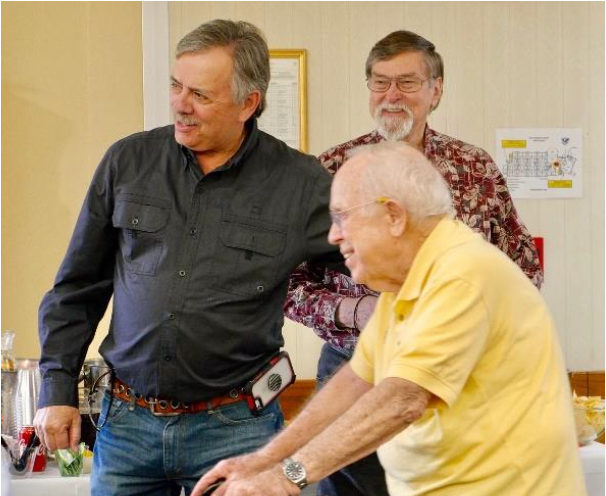