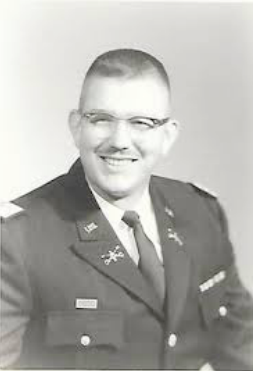 Major Voelkel was born on June 13, 1938 in Orlando Florida, to the late Richard and Doris Walker Voelkel. He served his country in the U.S. Army until his retirement and received the rank of Major. During his service, Major Voelkel received a Silver Star, 2 Bronze Stars, 13 Crosses of Valor, a Purple Heart, and several Meritorious Service Medals. Major Voelkel was a graduate of the University of Florida and received his masters from Texas Christian University. He was of the Catholic Faith. Major Voelkel was preceded in death by his daughter, Mrs. Julie Ann Simonson.

The below submission is from Glenn Plyler. Glenn and Lou served together in 2nd Squadron, 11th ACR, in Germany in the 1970s.

Funeral Mass for Lou Voelkel was held near his home of The Rock, Georgia. Family, friends and members of 2/11 ACR Border Cavalry Germany attended. Fort Benning Honor Guard performed last respects to an “Old Cavalry Solider”. Our friend and fellow solider was interned at Andersonville National Cemetery. Family values and team sports were the foundation for Lou’s ethical behavior. Respect for life, liberty, and duty are examples of Lou’s loyalty to all. Enlisted and commissioned service gave Lou the wisdom to match his bravery. Robert Louis Voelkel was my trusted fellow veteran and friend of many years Highly decorated for combat duty, Lou was an excellent mentor of junior officers. Lou, thanks for all you have given to me, to others, and to your country. Lou, as we talked about many times, your Southern grandma would be proud.

Ed Mathews is trying to locate information on a patch worn by members of How Battery. His description is below. Anyone who knows about this patch, please contact him at: opens in a new windowed_mathews@nullyahoo.comcreate new email

Though the patch below is not the issued patch that was worn on our uniforms in How Battery, elements of this one are similar to the How Battery patch. Ours was more of a “D” shape, as the patch below is. I do know our patch had the 3rd division triangle, and was worn above the right-side name tape. It would also be a great help if we were to be able to contact the Company Commander, who I believe was Captain Smith, but I’m not positive; the XO was Lt. Ehlers. Hope this might be of some help. Thank you for any information you may have. 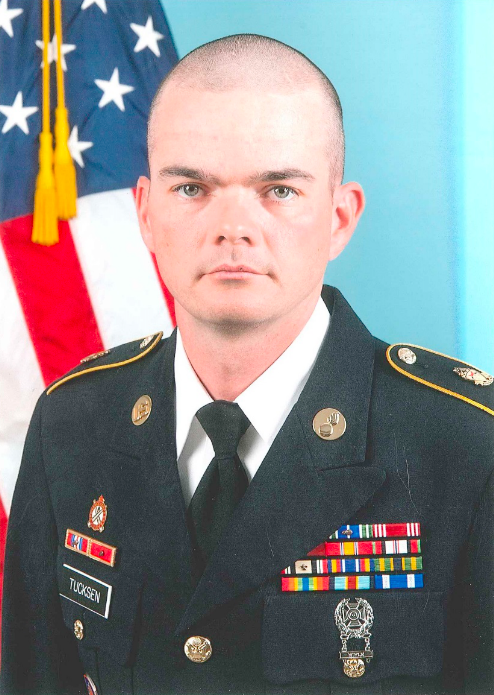 John R. Tucksen was born to Michael Lynn Tucksen and Cathy Lynn Gotberg in Payson, Utah. He graduated from Reynolds High School in June 1999. In August 1999, he enlisted into the United States Marine Corp. He attended Basic Training at Marine Corp Recruiting Depot (MCRD) San Diego, California. He was awarded the MOS of 2111 Small Arms Repair Technician and assigned to MAG 46 Det B HMH-769 as the Unit Armorer. Over the course of his assignment, he became the Armory NCOIC. At the end of his assignment he was honorably discharged from the United States Marine Corps at the rank of Corporal in August of 2003.

In October 2008, SGT Tucksen enlisted into the U. S. Army, where he attended MOS training at Fort Gordon, Georgia. He was awarded the MOS 94L Avionics Communication Repair Technician. In February 2009, he was assigned to B Co 412th ASB Katterbach, Germany. He deployed with B Co 412th ASB in support of Operation Iraqi Freedom 09-10 and Operation Enduring Freedom 12-13. During his time with the unit he worked himself up to the position of Team Leader. His MOS was merged into 94E, Radio and Communications Security Repairer.
He is currently assigned as a Squad Leader, Technical Inspector, and Communication Security (COMSEC) Custodian for Maintenance Troop, Regimental Support Squadron, 11th Armored Cavalry Regiment.

SGT Tucksen’s short-term goals include winning the NCO of the Year board and getting promoted to Staff Sergeant. His long-term goals include retiring from the U.S Army as a Command Sergeant Major, earning a Bachelor’s Degree in General Studies, and owning a house. 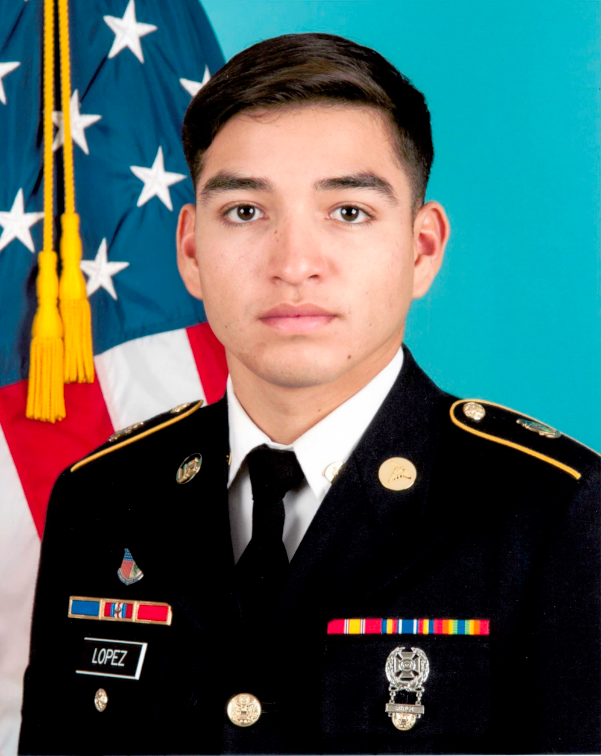 Specialist Jose M. Lopez was born on December 18, 1993. Raised in Harlingen, Texas, he is the oldest of three siblings.

SPC Lopez enlisted in the US Army on December 8, 2011. He attended Basic Combat Training at Fort Sill, OK in July 2012 and Advanced Individual Training for MOS 68W at Fort Sam Houston, Texas in October of 2013.

His first assignment was to HHT, 1/11th Medical Platoon, Fort Irwin, California in April 2013. He served as a line medic for Blackjack 1/11th ACR and for India Battery 1/11th ACR. While attached to the medical platoon, he completed his Associates in Health Science through Kaplan University Online. SPC Lopez won Soldier of the Month in October 2014.

SPC Lopez’s near term-goals are to become the Fort Irwin Soldier of the Quarter and complete his Bachelor’s Degree in Health Science. His long-term goals are to pass Special Forces Assessment and Selection (SFAS) and successfully complete the Special Forces Qualification Course (SFQC).

I was just searching through my old history about the base (Bien Hoa) I was on in Nam during 67-68. When I typed in Bien Hoa AFB, a lot of sites came up. And one of the sites was about the TET offensive. I was there then, and I didn’t need to look at it & dig up memories that I would rather forget. But I did, and to this day it still drags out too many memories.

For a long time I wondered what tank corps saved our bacon then. And, I found out that it was you guys. This is long overdue on my part sirs, but–Thank you!!! Thank you for saving & protecting us!!

The deadline to submit scholarship applications for the 2015-16 school year is fast approaching: April 1, 2015. Go to the Blackhorse web site opens in a new windowhttps://www.blackhorse.org/scholarships.cfm for details and the application form.

The complete application must be postmarked not-later-than March 31, 2015 and mailed to:

The application can also be emailed to opens in a new windowbobhurt3@nullcomcast.netcreate new email. If you have any questions, call Bob at 281-298-8446. Last year’s winners must reapply (that is, complete the full application as if it were the first time) to be eligible for the upcoming year’s awards. 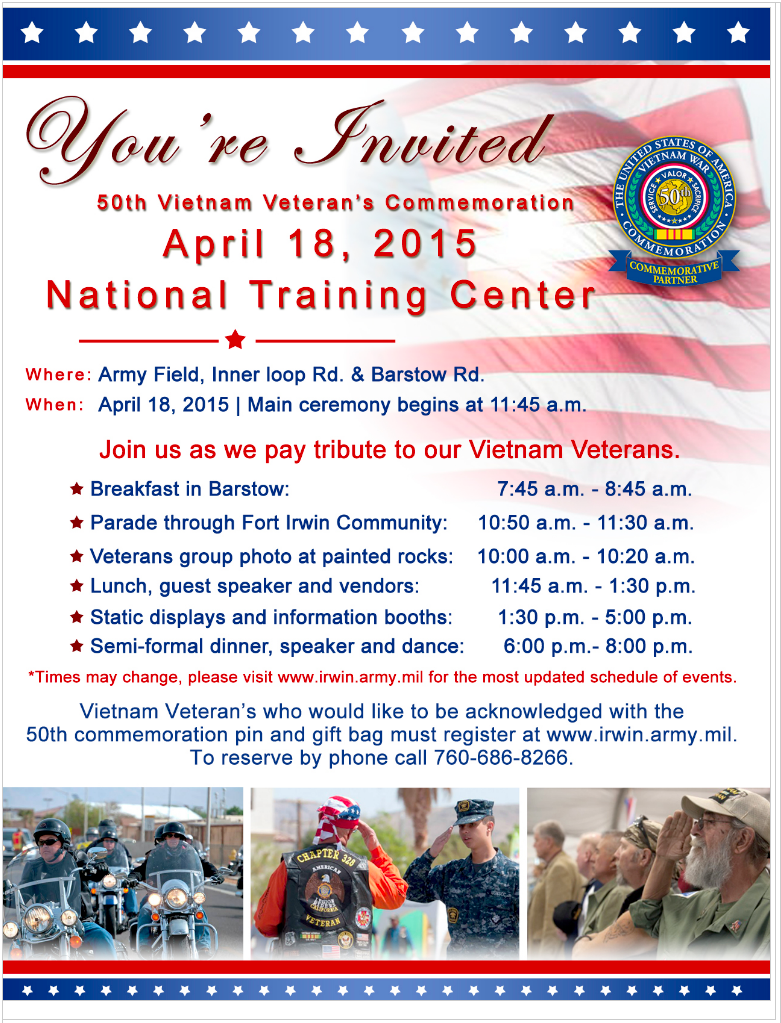 We sold 211 pavers at $100 each and reached our goal. We, along with the 11th Armored Cavalry’s Veterans of Vietnam and Cambodia, now have enough money collected to pay for the move of our monument from Fort Knox to Fort Benning, and for the construction of our new monument this spring. The Blackhorse Association sends a special thanks to all of you who contributed:

On June 12, 2015 at the Blackhorse Association Reunion in Las Vegas, there will be a drawing for two 1901 Campaign Hats. There is no cost to participate in the drawing.

opens in a new windowClick here to download a signup formopens PDF file . 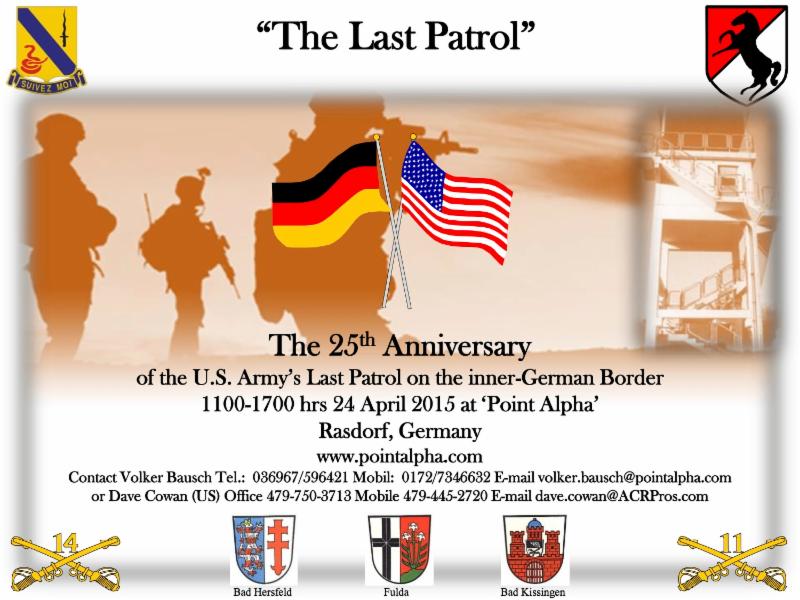 Planning continues for the Last Border Patrol commemorative celebration in Germany on April 24, 2015. The latest news is that the United States Army Europe band will participate. If you need further information or would like to attend, please contact Dave Cowan at: opens in a new windowdave.cowan@nullacrpros.comcreate new email.
Hotel information and locations can be found at the following links:

Further information is also available on the Point Alpha website in a series of outstanding videos at the following link:

opens in a new windowhttp://pointalpha.com/en/press-media-centre/image-movie