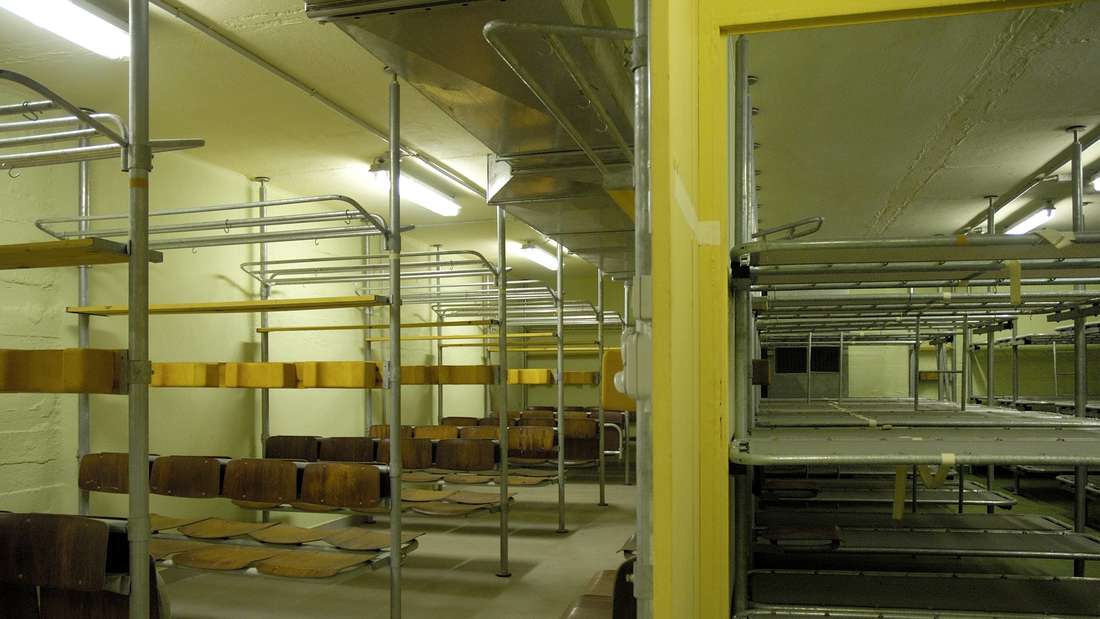 This nuclear bunker with space for a total of 4000 people is located in Bremen – built in 1975 on the lowest level of the underground car park at Sedanplatz. The photo was taken in 2008, since 2020 the facility has been under monument protection. © imago/stock&people
Russia’s invasion of Ukraine has brought back into the public consciousness a type of building that had long been forgotten: the air raid shelter. In contrast to the Ukraine, however, things look bleak in Germany.

Fulda – Many a Fuldaer will still remember: In the upper part of the Uniplatz in Fulda there were telephone booths and next to them, behind a fence, an inconspicuous staircase led down – there were two public shelters, each with space for 50 people and two emergency exits in the street pavement. In 2009 everything for the new underground car park was demolished. To date, no replacement has been created.

However, this is not an oversight, but intentional: in 2007, the federal government under Angela Merkel (CDU) decided to give up public shelters. The Cold War was over, Germany was surrounded by friends – and the facilities were very expensive to maintain. (Also read: Refugees from Ukraine: How best to help in the Fulda region )

War in Ukraine: Hardly any bunkers in Germany – civil defense comes into focus

Added to this was the progress in military technology: With cruise missiles, stealth bombers and missiles, would there even be enough time to be able to go to a shelter after a warning?

The answer of a spokesman for the Federal Agency for Real Estate Tasks (BImA) is clear: “Such an advance warning is no longer given given the threat situations that can be assumed today.” Founded in 2005, the BImA has been responsible for “dedicating” the shelters “from the civil defense obligation” since 2021. With success: “The de-designation is already well advanced,” it says.

In other words, there are no longer any public shelters in Germany (and most of the old air raid sirens have also been disposed of). Of the 2,000 public spaces in the old Federal Republic, 1,400 have so far been “reconverted”. The shelters of the former GDR were not even considered.

In many places the rooms have survived, but today they serve other purposes, such as storage. Many were also designed for multiple functions from the outset and are still used today as underground car parks or underground stations.
Dale Lawless
US Cavalry (Retired)
479-856-1660
Cavalrymen “MSH”