Skip to content
Troopers Down
Edwin Ramsey passed away March 7,2013. He was buried at Arlington National Cemetery on June 28, 2013. Edwin Ramsey was born in Illinois, raised in Kansas, and graduated from the Oklahoma Military Academy. Commissioned a 2nd Lieutenant in the Cavalry Reserve in May of 1938, he entered active service in February of 1941 with the famous 11th Cavalry Regiment, at Campo, California. In June of 1941, he volunteered for service in the Philippines with the elite 26th Cavalry Regiment (Philippine Scouts). With Regular Army officers and Filipino soldiers, the regiment was considerably smaller than a normal stateside cavalry regiment. It consisted of six line troops in two squadrons, with a total of 54 officers and 784 enlisted men.
In December 1941 when Japan attacked Pearl Harbor and then invaded the Philippines, the regiment was ordered north as part of the North Luzon Force to oppose the Japanese landings in Lingayan Gulf. Additional landings elsewhere forced the withdrawal of the outnumbered American and Filipino forces, whose retreat was covered by the 26th Cavalry into Bataan. Leading a 27-man Platoon, as advance guard for the 1st Regular Division of the Philippine Army, on January 1st, 1942 at the village of Morong, Bataan, Lieutenant Ramsey encountered a Japanese infantry force in the village and immediately ordered a charge. General Wainwright later awarded Ramsey the Silver Star for gallantry in action for leading what became the last Horse Cavalry charge in U.S. history.
Escaping after the surrender of Bataan, Lieutenant Ramsey formed the guerrilla forces in Central Luzon. Then came three years of agonizing guerrilla warfare, waged by courageous Americans and Filipinos on Luzon Island, fighting both the imperial Japanese Army and communist Huk guerrillas to prepare the way for the return of General Douglas MacArthur. Ramsey also sent critical intelligence information to General Douglas MacArthur in preparation for the liberation of the Philippines. After his return, General MacArthur personally awarded Ramsey the Distinguished Service Cross for his guerrilla activities. 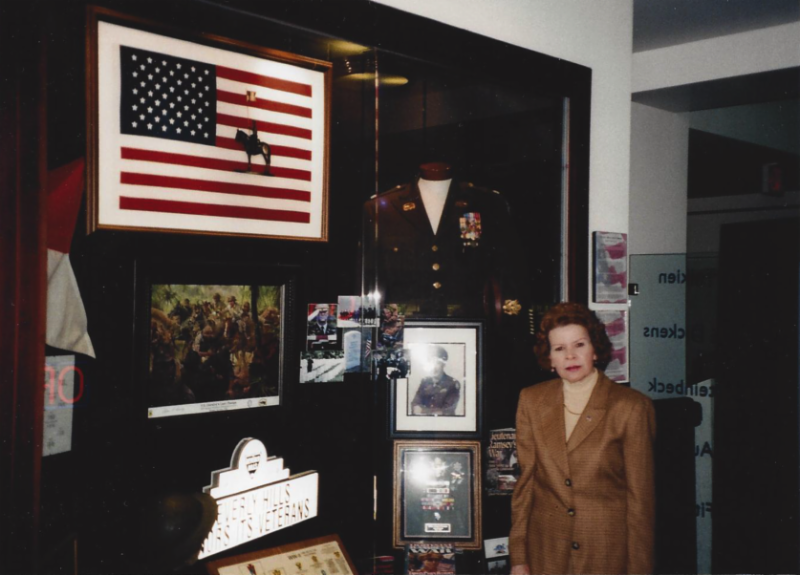 Ed Ramsey’s exhibit at the Beverly Hills Public Library sponsored by the BH Police Dept. and the BH Rotary Club. It opened on Veterans Day 2013 and will remain for 6 months.

His last duty assignment & major command was: Headquarters Troop, 2nd Squadron, 11th ACR. He was a Radio Operator in Xuan Loc, Vietnam from November 12, 1966 to November 22, 1967. He passed in 1984, from a collapsed lung, after complication from Hodgkin’s Disease, due to Agent Orange Exposure.

I submitted him for consideration for the Vietnam Memorial, but, since his death is attributed to Agent Orange, he will be added to the "In Memory Project." The note below is from the Memory Project.

During the In Memory Day ceremony, your father’s name will be read aloud (if you are present, you may read his name). At the conclusion of the ceremony, a Tribute bearing Edwin Taylor Reed’s name will be placed at the Vietnam Veterans Memorial (again, if you are present you may place your father’s tribute at The Wall). This Tribute will be collected by the National Park Service and stored in their permanent archive. In addition, Edwin Taylor Reed will be added to the In Memory Virtual Honor Roll to serve as a lasting reminder of his service and sacrifice. Please understand that, while your father’s memory and service will be honored; his name will not be inscribed on The Wall.

If any ACR family is in the area they are certainly welcome to attend the ceremony, or contact me for any information (717-421-1036 cell or email at reed.designs@nullyahoo.com). It is very fitting for him to be honored this year, because in July it will be 30 years since his death.


Donald L. Gaugler, husband, father, grandfather, great grandfather and brother, passed away on Saturday April 12, 2014. Don was born and raised in Northumberland, Pa where he lived until joining the U.S. Army in 1956. He retired from the U.S. Army as a Command Sergeant Major 26 years later. He served as First Sergeant of G Troop, 2/11 ACR 1977 to 1979 in Bad Kissingen, Germany.

Don’s second career was in security. He was employed at the Broadmoor Hotel for 10 years then at the Penrose St. Francis Hospital for an additional 10 years. Don is survived by his wife Annemarie; children George, Edward and Fay Jenkins; daughter-in-law Irene; sister Faye Gross; 10 grandchildren; and 11 great-grandchildren. Don loved his family, the U.S. Army, and Colorado.

Joanne Patton, wife of MG George Patton, former Regimental Commander, was featured in the Spring 2014 USAA magazine. Follow this link for the magazine. opens in a new window

There is another link on this site for the magazine itself, with the article. Also, if you scroll down on the opening page, you’ll find a link to a video interview with Mrs. Patton. This link will take you directly to the interview.opens in a new window

The Colorado Reunion is shaping up to be one of our best ever. Colonel Lanier Ward, the current Regimental Commander will be our keynote speaker on Saturday night. He is a decorated combat veteran who will undoubtedly give us a great talk about OUR regiment.

One of our honored guests will be Mrs. Joanne Patton, wife of Major General George Patton, former Blackhorse Six.

It’s not too late to register for the Reunion. If you plan to attend, please sign up as soon as possible so we can ensure we can complete our planning.

And this note from the hotel: "your rooms cut-off date for guest rooms during the Blackhorse Association Reunion, Tuesday, May 13, is quickly approaching. After this date, rooms not covered by a rooming list/individual reservations/reservations card shall be released from the room block. The hotel will continue to accept reservations from your attendees after that date at the prevailing room rate, subject to availability."

We are looking to have one of our best reunions ever. Below is a link to a list of those who have registered already-please join us for a great time.

Last year, the monument to the 3rd Squadrons of both the 14th and 11th Armored Cavalry Regiments in McPheeter’s Barracks, Bad Hersfeld was defaced. The City of Bad Hersfeld, and in particular, Bürgermeister Thomas Fehling and the Sparkasse Bad Hersfeld-Rotenburg (Herr Reihard Faulstich, Director) took swift action to ensure that the monument will be restored. Both gentlemen were sent a letter of heartfelt thanks for their support and continued friendship. The letters were signed by three former general officers who served in Bad Hersfeld, General (ret) B. B. Bell (1969-1972), Major General (ret) J. B. Burns (1970-1974), and Brigadier General (ret) Stan Cherrie (1969-1970 and 1980-1984). The two were also presented with a replica of the plaque that is on the monument, with an additional note at the bottom, thanking them for their efforts (see below). 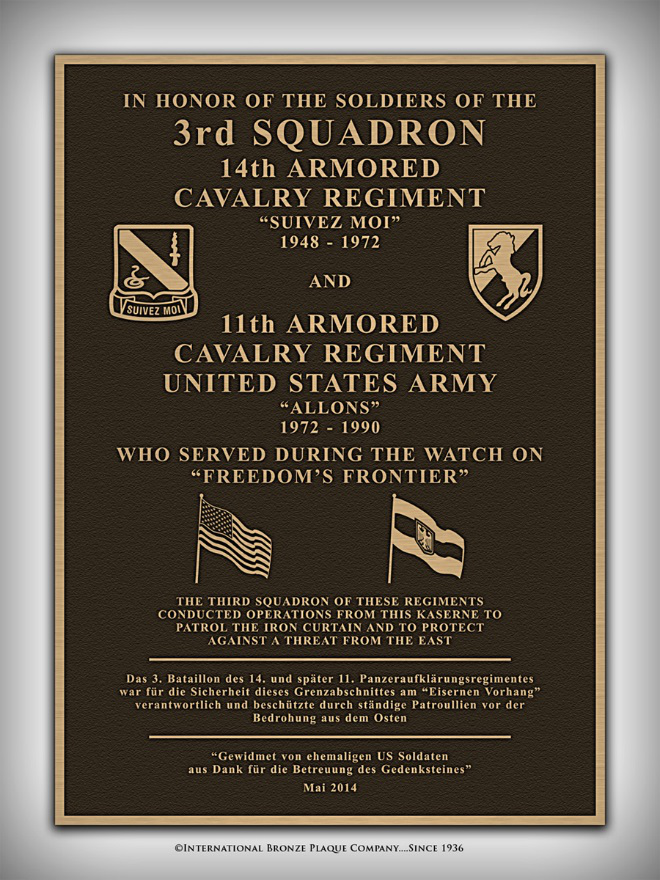 A big Blackhorse thanks also goes to Gabriele Hasper, Steve Lungstrum, Hans Duerr, and Glenn Allardyce for their help in making this happen.

The 11th Cavalry Band – A Great Historical Article
The link below is to a very interesting article on the 11th Cavalry’s Band, describing it shortly after the Regiment’s formation. It has a great picture of the band on parade and mounted! For those of us who had difficulty staying in step with a band while marching, think about trying to play an instrument and ride in formation at the same time.
http://temposenzatempo.blogspot.com/2010/05/11th-us-cavalry-band.htmlopens in a new window 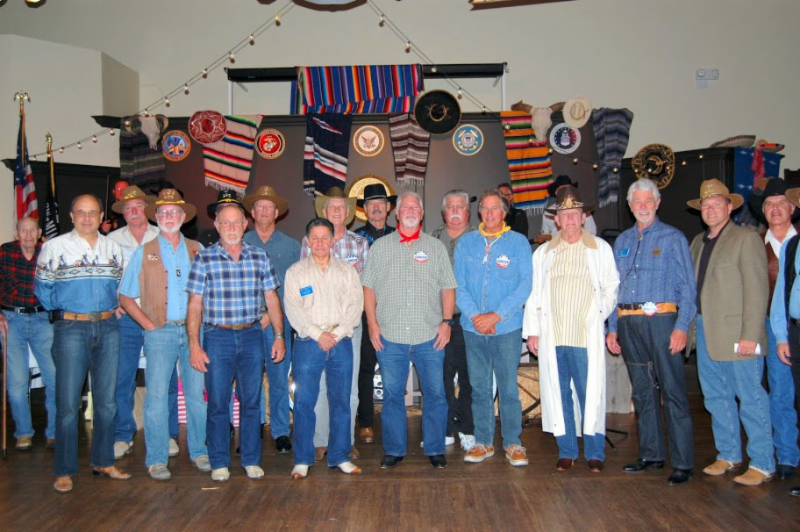 Patrick Murphy manned a booth at the annual MWR Welcome Home Veterans event at Fort Irwin – and encouraged 75 troopers to become members of the Association. 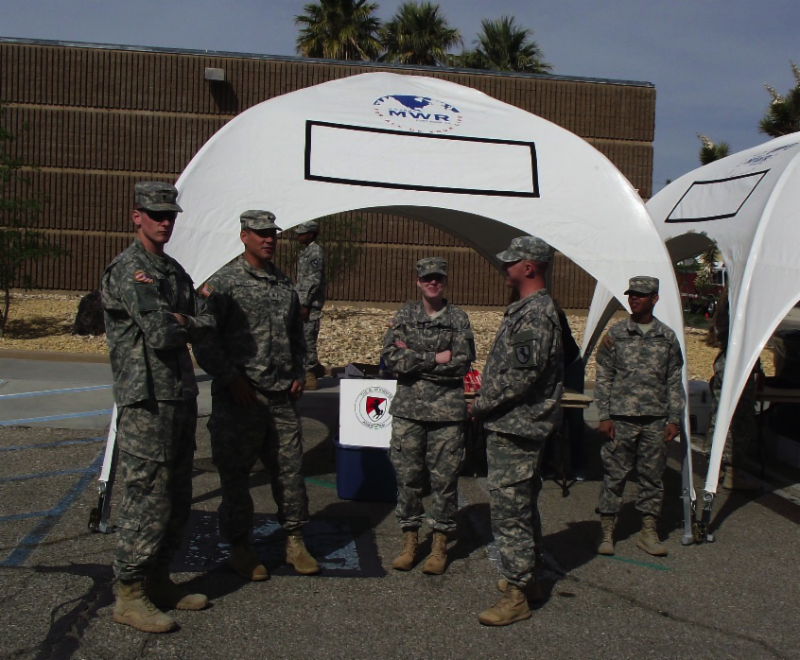 On June 13, 2014 at the Blackhorse Association Reunion in Colorado Springs, there will be a drawing for two 1901 Campaign Hats.

Point Alpha Book
The new Point Alpha book (mentioned in the April eblast) is now for sale in the Association store at www.blackhorsestore.org.opens in a new window

Attendees are encouraged to make plans early. For reservations, please visit https://www.reseze.net/cassets/mkt/mcmelegante/landing_pages/MCM_Colorado_Blackhorse_Association.htmlopens in a new window or call (800) 981-4012 (reservations). You can phone their Front Desk directly at (719) 576-5900 (be sure to give them our Group ID number – 693108 – and say you are attending the Blackhorse reunion).

For additional lodging options, go to http://www.expedia.com/Colorado-Springs-Hotels.d602991.Travel-Guide-Hotelsopens in a new window.