Tom Griffin passed away last Friday after fighting a courageous fifteen-year battle against cancer. Tom served with the 11th ACR in Germany in the 1980s in Fulda as a young field artillery lieutenant. Over the last 18-19 years, Tom had served in various assignments/capacities within U.S. Central Command. Before retiring in 2003 as a U.S. Army Lieutenant Colonel with 24 years of service, Tom served as CCJ5 Chief, Legislative Affairs and also as Chief of Training, OMC Cairo. Upon his retirement and for the last eleven years, Tom worked as a Northrup Grumman Contractor within CENTCOM. Tom’s last position known was CENTCOM’s CTFP coordinator. Tom’s professionalism and friendship will be sorely missed by the SC training community.

Fort Knox Phase. The work at the Fort Knox site (in Memorial Park next to the Patton Museum) is not quite completed. At the end of July, when the monument was moved to Fort Benning, we (the Blackhorse Association and the 11th ACVVC) contracted with a local business to complete the work-specifically to take up the former base of the monument and the broken concrete, and properly landscape. However, the Fort Knox area has had an extremely wet summer and early fall, and the contractor has only just this past weekend been able to get his heavy equipment onto the site to do the work (without causing more damage to the ground around the site). As I write this update, all of the concrete has been removed and topsoil has been put onto the site; what remains is the planting of new grass. Our promise to everyone is that we will complete this project properly and the site will be left better than when we found it.

Fort Benning Phase. The Groundbreaking Ceremony is next Tuesday, November 11, 2014, at Fort Benning. If you live near Fort Benning, please consider attending these activities on Veterans Day. There will be a paver ceremony at 10 a.m. at the National Infantry Museum (NIM). At 11:30 a.m., there will be a ceremony to open Pattons’ Park, which is Phase 1 of the hoped-for future Armor/Cavalry Museum. Phase 1 includes seven armored vehicles from various eras and three helicopters. The honored speaker for the Park Opening will be General (ret.) William Scott Wallace, the 54th Colonel of the Regiment. Immediately following the Park Opening, Allen Hathaway, President of the 11th ACVVC, and I will conduct a short ceremony (with brief remarks and then some digging and picture-taking) to break ground on the site of our future monument, adjacent to Pattons’ Park, which will be erected next spring. Mr. Kingdon Gould will represent the 11th Cavalry from WW II, and MG (ret.) Pete Bayer (the 61st Colonel of the Regiment) will represent the Iraq troops. There will be a reception following these events at the NIM, where there is a new gallery dedicated to Armor and Cavalry. 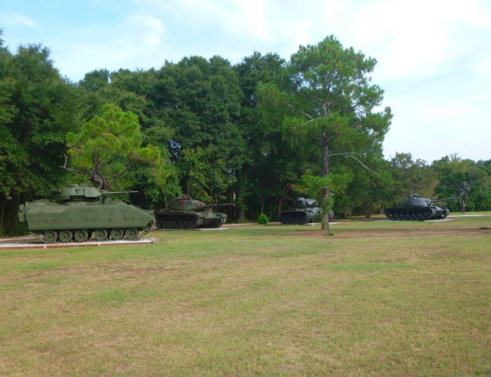 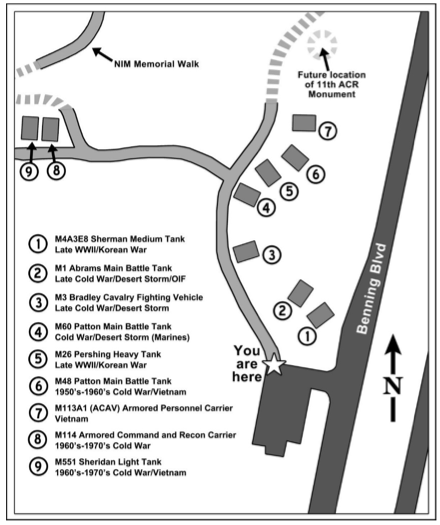 JOIN US FOR THE GRAND OPENING ON VETERANS DAY
NOVEMBER 11, 2014 AT 11:30 a.m.
PATTONS’ PARK IS LOCATED JUST OUTSIDE THE BENNING BLVD GATE. THE OPENING WILL BE FOLLOWED BY THE GROUND BREAKING FOR THE 11TH ACR MONUMENT.

Follow the link below to an interesting video on some of the vehicles being prepared for display at Patton Park: opens in a new windowhttp://www.youtube.com/watch?v=bmnuPLBaxD4&feature=youtu.be

We are very near completing our negotiations and signing a contract for next year’s Blackhorse Family Reunion. Please mark and save the dates!!

Lead – Gus Flangas, our aviator/lawyer in town, who coordinated our great 2011 reunion there.

We will soon be sending out a special electronic newsletter with all the details of the activities and the costs.

Follow the link below for a pamphlet that looks at the Fulda Gap and the role it played in the Cold War.

opens in a new windowhttps://archive.org/details/FuldaGap