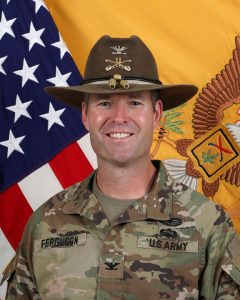 Colonel Timothy J. Ferguson attended Dickinson College in Carlisle, Pennsylvania, where he was a Distinguished Military Graduate. At graduation in 1999, he received a Bachelor of Arts in History and was commissioned as an Armor officer. Following the Armor Officer Basic Course (AOBC) at Fort Knox, Kentucky, COL Ferguson’s first assignment was with the 1st Cavalry Division at Fort Hood, Texas, where he served in various positions in 2nd Battalion, 12th Cavalry Regiment. Following the Armor Captain’s Career Course (ACCC) at Fort Knox he was assigned to the 1st Armored Division in Wiesbaden, Germany. COL Ferguson then deployed with 1st Brigade Combat Team at Friedberg, Germany and assumed command of Charlie Company, 2nd Battalion, 37th Armor Regiment, in Tal Afar, Iraq in April 2006 and moved his company to Ar Ramadi, Iraq. Following the redeployment, he transitioned to the 2nd Brigade Combat Team in Baumholder, Germany, where he assumed command of Headquarters and Headquarters Company, 2nd Battalion, 6th Infantry Regiment, in June 2007 and deployed to Salman Pak, Iraq, in 2008 as part of “the Surge”. After relinquishing command in November 2008, he served as the Battalion Operations Officer (S-3) through redeployment and oversaw the reflagging of the unit to 3rd Battalion, 4th Infantry Regiment, as part of the 170th Infantry Brigade Combat Team.

In 2009, COL Ferguson attended graduate school at the University of Pennsylvania earning a Master of Science in Organizational Dynamics and then attended Intermediate Level Education (ILE) as part of the Command and General Staff College at Fort Leavenworth, Kansas. After ILE, COL Ferguson was assigned to the 2nd Infantry Division staff at Camp Red Cloud, Korea. In 2013, COL Ferguson transitioned to the Battalion Operations Officer (S3) of 1st Battalion, 72nd Armor Regiment, at Camp Casey, Korea and subsequently Brigade Operations Officer (S3), 1st Armored Brigade Combat Team, Camp Hovey, Korea, where he oversaw the planning and synchronization of the inactivation of the brigade and the integration of rotational ABCTs to the Republic of Korea. Following his return from Korea, COL Ferguson assumed the duty as the Professor of Military Science at Northeastern University in Boston, Massachusetts, in June 2015.

COL Ferguson returned to the 1st Cavalry Division in July 2017 and assumed command of the 2nd Battalion 8th (US) Cavalry Regiment, 1st Armored Brigade Combat Team. He deployed to Europe as part of Atlantic Resolve in May 2018 primarily to Drawsko Pomorskie Training Area (DPTA) in northwest Poland, with elements of the battalion operating in the Republic of Georgia, Turkey, and Latvia in support of regional deterrence and allied and partner missions.

In June 2019, COL Ferguson assumed command as the first Squadron Commander of 3rd Squadron, 5th Security Force Assistance Brigade (SFAB) at JBLM, Washington, and helped recruit, build, and activate the unit. Upon completion of his command in June 2021, COL Ferguson attended, studied, and graduated from the U.S. Army War College in Carlisle, Pennsylvania.

COL Ferguson is married to the former Ms. Alexandra VanBerkhout of Winchester, Massachusetts. They have been married for 19 years and have two children: Nathaniel and Evelyne. 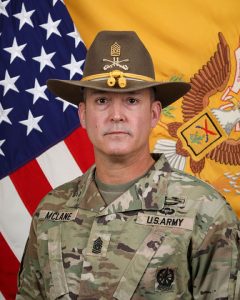 Command Sergeant Major Ryan M. McLane is a native of Waynesville, Illinois. He enlisted in the Army on 26 May 1994 and attended One Station Unit Training (OSUT) and Advanced Individual Training (AIT) at Fort Benning, Georgia where he trained as a Mechanized Infantryman (11M).

XHot Key: CTRL-Q
We use cookies to ensure that we give you the best experience on our website. Ok